Alice in Wonderland and Through the Looking Glass by Lewis Carroll 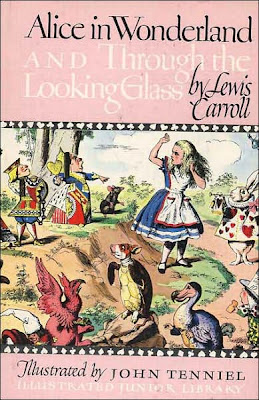 It is a very inconvenient habit of kittens (Alice had once made the remark) that, whatever you say to them, they always purr. "If they would only purr for 'yes,' and mew for 'no,' or any rule of that sort," she had said, "so that one could keep up a conversation!

I love that quote.

I've been hesitating to review this book for several reasons:

1. It's really, really difficult to describe.
2. Alice in Wonderland and Through the Looking Glass are actually two separate books under one cover. Disney warped my brain. Who knew?
3. Blogger weirdness. All of a sudden the little task bar has shrunk and there are several things I can't do - highlight and change text color, for example. How very annoying.

So, a few comments. Apparently, I'm into lists, today:

1. Lotus is so much better at this. If you want to read a decent review, go to her blog or straight to the entry here.
2. Wikipedia has a really terrific page about Alice in Wonderland.
3. According to the Wikipedia page, Oscar Wilde and Queen Victoria loved Alice in Wonderland; Terry Pratchett dislikes Alice. I'm siding with Oscar and Victoria on the first book and lean toward the words "nonsense without evident purpose" on the Looking-Glass portion (in spite of its obvious chess-game setting). But, that may be because I was so well-acquainted with the former, or thought I was.
4. Nonsense really fits me well, actually. I'm pretty much full of it.

Here's what little I know about Alice in Wonderland. The story was first told to a real little girl named Alice and her sisters to entertain them and was later expanded upon and published. I knew that much primarily because I've been to Oxford, England, where the story was created. At the time, I was much more interested in getting a glimpse of the fountain with a statue of Mercury in its center than hearing about Alice because I'd just read and watched Brideshead Revisited by Evelyn Vaughn. I got my wish to see the fountain where one of the characters was "dipped in Mercury," and my aging camera picked that day to die. Of all places. So, I didn't manage to get a shot of the shop with Alice memorabilia, although I did take note of it.

In case there is anyone on the planet who isn't familiar with the story (and just happens to drop in), Alice in Wonderland is the tale of a young girl who tumbles into a rabbit hole and discovers a strange world where playing cards come to life, a cat disappears (leaving only his smile behind), and rhymes she's memorized in school come out all wrong . . . and too much else to mention. I have no idea why it took me so long to get around to reading this book, but it's loads of fun. My copy is the version shown above, with the wonderful original illustrations by John Tenniel. I think the fact that the illustrations fit the time period made the book even more enjoyable for me.

Among my favorite of the twisted rhymes is the following bit from You Are Old, Father William:

'You are old', said the youth, 'and your jaws are too weak
For anything tougher than suet;
Yet you finished the goose, with the bones and the beak--
Pray, how did you manage to do it?'

'In my youth,' said his father, 'I took to the law,
And argued each case with my wife;
And the muscular strength, which it gave to my jaw
Has lasted the rest of my life.'

Okay, I get that. I've argued a case or two with the husband. Hahaha.

The second book, Through the Looking Glass, tells about the backwards world Alice encounters when she steps through a mirror. Within this world, Alice becomes a part of a chess game. I found this particular story a bit too bizarre, although I still enjoyed it. Wikipedia helped to make a little sense of some of the characters - a man dressed entirely in paper, for example, bore a striking resemblance to prime minister Gladstone. The point of representing these characters in the way the author did is lost on me, unfortunately.

Both stories are very much products of the time period and location in which they were conceived and written, loaded with satire and puns, illustrations of real people, and political stabs. So, it's truly quite amazing that they're still fun to read. But, who wouldn't find it adorable to read about a "mock turtle", the kind you find in mock turtle soup?

I absolutely don't know how to rate this one. I loved the first story and found the second story baffling, but still loaded with great moments of silliness. I think I can't help but give it an excellent rating because it's so utterly clever, a bit like Douglas Adams' Hitchhikers series in that it was all extremely weird but in a wickedly fun way that not just any bloke off the pavement could have come up with. Yes, that's it. I've settled on excellent and I'm happy to have read Alice in Wonderland.

This was my fifth classic of the year, so I've officially finished the Classics Challenge, but I still have several I want to read this year. I'm not done with the Classics, just yet. Also, Alice has been sitting here a while, so the book is another one for the TBR Challenge. Wahoo!

Best moment of the day: Am I turning into a complete wacko? Because it seems a little weird that I've become incredibly enamored of my bird moments. Today, a hawk flew into a tree beside the highway upon which I was driving just after dropping the kiddo off at school. A bluebird whipped past, later. And, I found an Audubon bird guide tucked away in a drawer, thereby enabling me to determine that a bird I photographed in my backyard was a pine warbler. Wacko, wacko bird lover bibliophile chick. Well, so be it. I do adore nature.

Next up: A review of In the Presence of Mine Enemies: Faith Reborn in a POW Camp by Howard and Phyllis Rutledge, which I finished yesterday. And, a description of the totally unexpected, ridiculously romantic thing my husband did for Valentine's Day. Bet you can't wait.

Now wondering: Salmonella in peanut butter? What is the world coming to? If peanut butter isn't safe, Mom's apple pie is about to become suspect.

Grammar lesson of the day: Always write "female" when describing women in a particular profession. Female astronaut, female senator - not "woman"! You wouldn't call a male astronaut or senator a "man astronaut", right? Okay, just had to get that off my chest.