I missed Earth Day because of things going on in our lives, none of which seem likely to be resolved any time soon. So, today's post is a delayed Earth Day post. The first book I have read and will review thoroughly. The second is a book I'd hoped to read by the end of April but have not, so I'll just tell you about it. And, the third little bit is about a DVD you've all heard of, which I just acquired -- and why I'm interested in watching it. 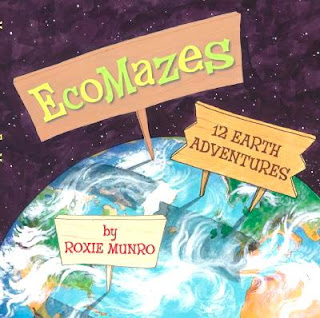 The promotional material for Roxie Munro's EcoMazes says, "Embark on an incredible odyssey through planet Earth's most exotic ecosystems." And, of course, the title makes it obvious that it's a book of mazes, but they're not the kind of mazes you do with a crayon, once, and then throw away. EcoMazes is a gorgeous picture book, first and foremost. Roxie Munro's mazes are set in various ecosystems, with an introduction advising children to trace the paths using a finger, so that they can be enjoyed over and over, again.

Each maze is a gorgeous, two-page spread. At times, I found I had to hold the book away in order to figure out where the path goes across the center fold, but I don't know if youngsters would have that issue. My eyes are getting old, after all, and I don't have a youngster around to ask. There's a tiny blurb and then a list of creatures to search for (à la "Where's Waldo?"). For example, the Tropical Rainforest maze says,

You're a biologist checking on the monkeys--find your way from the pier to the beach (and watch out for the jaguars!).

This is followed by a list of animals to find in the Tropical Rainforest and how many of each are hidden. Personally, I think it would be helpful if a few things were labeled. I had to search to find the pier in order to begin, for example, and if you plunked a child in the back of a car with this book, it very well could be a problem. "What's a pier, Mom?" would likely be the first question, followed by, "What's a roseate spoonbill? What's a macaw look like?" and so forth. The problem is that absolutely nothing is labeled and there is no key showing each of the animals. If you don't know what a roseate spoonbill looks like (yes, they're pretty obvious if you know them, but if you don't . . . ) you'll need to look them up or cheat by looking at the solutions in the back of the book.

This is where the good part comes in. EcoMazes would be excellent for homeschoolers. I homeschooled my eldest son for a single year and we enjoyed books that forced us to look up new information. You could do a climate per day, have the children look up roseate spoonbills, jaguars, toucans, etc., and draw pictures of them. Then, send them through the maze, have them look for the animals, and read the information beside each solution in the back of the book because the solution section is the part of the book that contains the most information about each of the ecosystems shown.

The artwork in this book is eye-popping. I particularly recommend it for parents who would like to get involved with their children in learning about a variety of our world's ecosystems and the animals that live in them. EcoMazes is not only a great jumping-off point for learning, but also a book that is so beautiful and fun that children will likely spend hours returning to it. Even smaller children who aren't ready for the information involved will undoubtedly enjoy looking at the pictures.

4/5 - Beautiful artwork, a great teaching tool. Point off for not including a key or labeling the start and finish points of the mazes. If you're not willing to spend time with children, looking up information about the animals, I'd skip it. But I think the book is a terrific starting point for a learning adventure. 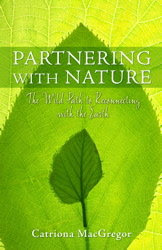 I really wanted to dive right into this book when I received it, but it had to go into the queue and I haven't gotten to it, yet. I will, however, do a full review when I've read the book. For now, I'll just tell you what it's about.

Partnering with Nature is subtitled: The Wild Path to Reconnecting with the Earth and the author leads "vision quests and youth quests" that actually lead people into nature, so they can get in touch with the earth and learn why it's worth caring about. The author asserts that it's a lack of contact with nature that has led to a lot of the ills of our population (and I'm assuming she's referring to the United States, but I won't know that till I read the book), such as stress, depression, obesity, attention disorders and apathy.

I think there's a lot of truth in those words and I'm quite curious what she has to say. I've currently got two other nonfiction books that I need to read before Partnering with Nature, so hopefully it will be no longer than 2 weeks before I get to this book. A quote:

In this age of scientific triumph, our daily connection with the Earth has diminished alarmingly. We are cut off from nature, and separate from the animals and plants that surround us, making us strangers in our own home. We miss the subtle changes in the wind, the calls of the birds, the smell of the fragrant Earth beneath our feet.

At this point, I thought, "But we're still sneezing over the pollen, even inside the house." Hahaha. Okay, spring joke. I don't know about the rest of you, but I love that quote and, yep, I've been sneezing my head off. Bottom line: I'm really looking forward to this book and I already agree with her to a certain extent. Nature is a bit of a pain in Mississippi (the heat, humidity, poison ivy, stinging and biting insects) but we used to go out of our way to find places to take nature walks -- our favorite being Rocky Springs on the Natchez Trace -- when our children were smaller. As adults, we could definitely stand to get out and enjoy nature a bit more. 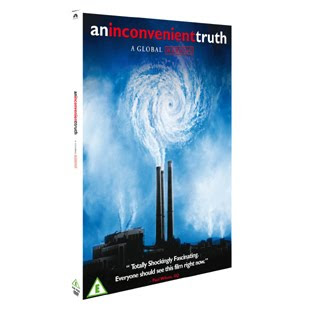 An Inconvient Truth: A Global Warning
(on DVD)

Here's the point at which about 25-50% of the Americans roll their eyes. Why on earth would I want to watch a politician babble about climate change and how it's effecting our earth? Well, quite simply because I live on the planet and I think it would be nice if humans and animals continued to live on Earth for a milennia or two or . . . you know, a long time. I do have kids, after all.

I don't think of climate change as a political issue, in spite of the fact that there's a fellow by the name of Al Gore who is deeply involved in the environmental cause. In fact, I admire Mr. Gore for refusing to give up his passion. It lost him the presidency, after all -- well, that and the fact that he was a wee bit on the stiff side. I think he's improved since the 80's. I found a copy of An Inconvenient Truth at our Big Lots for $3. It's got a minimum of packaging and this is the inside of the case: 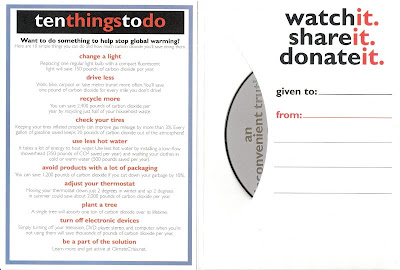 I love the fact that there's a list of things you can do to help stop global warming -- a simple list, right inside the case. I'm going to have to take my youngest son by the collar and sit him down because he is one of those people who have listened to the chatter about global warming being a "farce" and thinks, like many, that there is no actual evidence to show that humans have impacted the earth's climate. I had many questions about climate change but I'm thoroughly convinced that there's ample evidence that human's have caused a dangerous upward trend in temperatures throughout the globe after reading A Climate for Change (<---Link to my review. The giveaway associated with that review has ended, by the way.) and I'm looking forward to watching An Inconvenient Truth.

What else is new?

Not much. I've been sick most of the week, so the housework has backed up a bit. Huzzybuns did not make it to Anchorage, this week, thanks to the fact that one leg of his journey was cancelled, so he's taken off the afternoon to take advantage of the sunny weather and help me with cleaning and gardening. We're expecting some more bad weather, this weekend, but hopefully nothing as dramatic as last week's 149-mile tornado path that came within about 10 miles of us (eeks). My thoughts and prayers are still with the people of Eagle Lake and Yazoo City who lost homes and loved ones.