The Wonderful Wizard of Oz by L. Frank Baum, illustrated by Michael Sieben 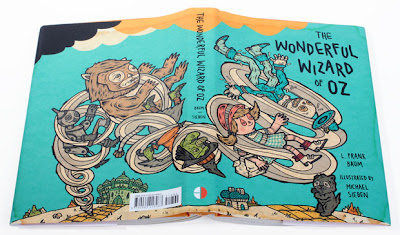 Dorothy and her dog Toto are carried to a foreign land known as Oz by a powerful tornado. In Oz, the house lands on the Wicked Witch of the East and Dorothy acquires the witch's charmed silver shoes but she doesn't know how how to use them or whether she will ever manage to return to Kansas.  She's told to follow the yellow brick road to the Emerald City to ask The Great and Terrible Wizard of Oz to help her return.  Along the way, she makes new friends, meets some very interesting people and faces many challenges.  Oz insists that he will only help Dorothy and her friends with their needs if they kill the Wicked Witch of the West. When she finds out the wizard is nothing but a "humbug", will Dorothy be stuck in Oz, forever? 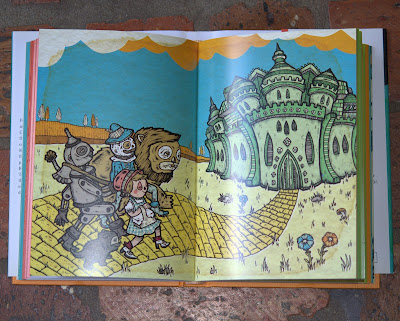 Why I read it:

I read a condensed version of The Wizard of Oz [sic] in 2009 and thought it a delightful story.  Since then, I've wanted to read the original in its full glory, but I obviously didn't rush out to find a copy.  When I was contacted about reviewing a new edition, I jumped at the opportunity.  I don't participate in reading challenges (although I occasionally will follow along in spirit by reading a book or two fitting the theme) but I had the Once Upon a Time Challenge in my head.  Spring feels destined for fantasies and fables, thanks to the annual challenge.

What I liked about The Wonderful Wizard of Oz:

There is much to love about L. Frank Baum's response to the older and very dark fairy tales by Grimm and Anderson. Baum thought they were too horrifying; and, it was time for a new kind of "wonder" story.  Because he deliberately set out to avoid the gore and horror of older stories, The Wonderful Wizard of Oz is surprisingly innocuous, which pleased me because I'm none too fond of the scary bits in the old movie.  Bad things happen, but they're invariably followed by good.  Even the notorious flying monkeys are not all that evil.  They've been enslaved for being naughty and have to do what they're told, but they're not malicious. 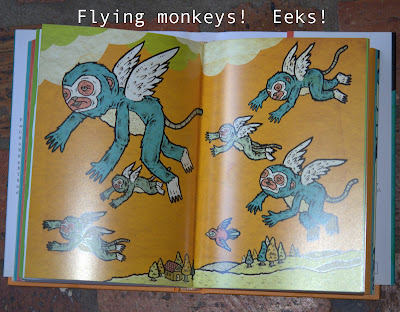 Typically, for a story that has been altered when made into a movie (quite a few times, although I admit to ignoring all but the Judy Garland version made in the 30s) there is a great deal more to the book than the trimmed-down movie version. Munchkins are only one of the different peoples Dorothy meets.  I was particularly surprised by the village made entirely of china and the Winkies, who were held captive by the Wicked Witch of the West.

What is special about this particular edition?

The Harper Design edition has nice, large print (but not huge) and it's very high quality -- the kind of book with an upscale scent that makes you want to stick your nose between the pages and inhale deeply.  The edges of the pages are colored so that, when closed, there is a rainbow of colored strips. 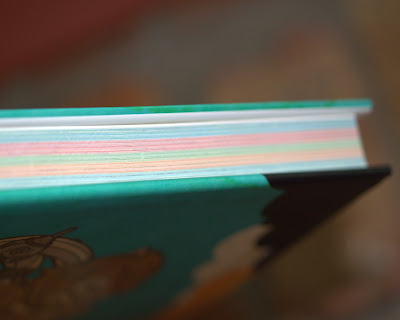 And, the illustrations are unique to the edition, of course.  Beneath the jacket (shown open at the top of this page), the cover is orange cloth with a small black line illustration of two jars, one that says "brains" and the other "courage", along with a heart.

What I disliked about The Wonderful Wizard of Oz:

I confess that I don't love the illustrations.  Some of them are cute (like the mouse queen, below), but for the most part they're not to my taste. 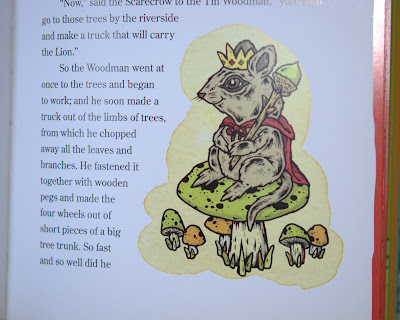 Toto doesn't even look like a dog, to me.  He looks like a stuffed bear with an awkward tail.  But, I was all about the story, in this case, and I know of at least two people who will probably love the illustrations.  I do like some.  I love the slipcover illustration and the illustration beneath.  The illustrations have what I think of as the "new graphic look" (my wording) - simple but just a little on the weird side.  I love the fact that the book is packed with illustrations, including a lot of two-page spreads.  And, I'm stupidly fond of the chapter headings. 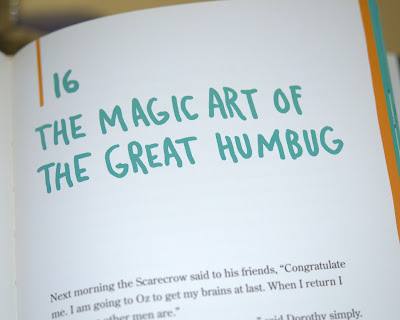 I still don't love the flying monkeys, innocuous though they may be.

Recommended - A fun, escapist read that is nowhere near as sinister as the movie.  I absolutely loved the unabridged storyline in The Wonderful Wizard of Oz, especially the part where the wizard confesses that he's not at all "great and terrible"; he's just a "humbug" (a fraud).  Whether or not you're interested in this particular edition probably will have to do with the illustrations and quality, more than anything.  I'm impressed with the quality but am not a big fan of the illustrations, although I had my favorites.

It's always tremendous fun reading the original classic and finding out what was cut from the book or changed when the book was made into a movie.  Silver slippers rather than ruby red!  Winkies trapped in slavery!  Likable flying monkeys! Very cool.

©2013 Nancy Horner. All rights reserved. If you are reading this post at a site other than Bookfoolery  or its RSS feed, you are reading a stolen feed. Email bookfoolery@gmail.com for written permission to reproduce text or photos.
Posted by Bookfool at 8:50 PM