Illuminae (The Illuminae Files, #1) by Amie Kaufman and Jay Kristoff 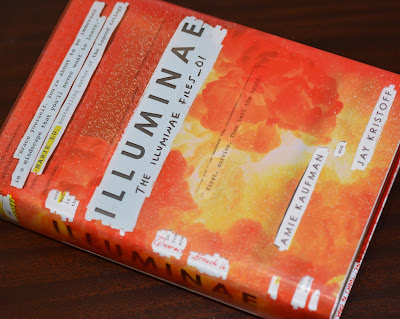 First things first: Illuminae is gorgeous. When the two copies I pre-ordered arrived (one for my son, one for myself -- an error, but one I opted to let stand), I was immensely impressed by the gorgeous slipcover, which is semi-transparent plastic. The hard paper cover beneath is even impressive -- black, red and yellow on a white background. A lot of money has gone into the production of this book, that much is clear.

Illuminae is a YA sci-fi that begins with the attack of an illegal mining colony by a competing corporation. It's the 26th century and there are ships that can create their own wormholes. The attack is unexpected and devastating. Of the three ships on which survivors manage to escape, only one is able to create wormholes and unfortunately that's impossible due to damage to the ship. The survivors need to get to a static wormhole to escape the pursuing ship and travel back to civilization but it will take months . . . and there are two things chasing them: a terrifying disease and an enemy ship. On top of those problems, there is a computer much like Hal of 2001. It has gone rogue and may be as deadly as the enemy.

My son and I read Illuminae together, thanks to the fact that we had two copies. He read and enjoyed Jay Kristoff's previous series and Illuminae (written with co-author Amie Kaufman) sounded like my kind of adventure, so we were both pretty excited. We have read books together -- or taken turns reading -- and then discussed, off and on, for years. I highly recommend doing so with kids, if you have them. Reading together is a great way to ramp up your child's excitement about books when they're younger and I've found one of the most enjoyable things about having older children is that now, even when we're far apart, we often end up discussing what we've read over the phone.

Back to the book . . . Illuminae is written as a dossier collecting various documents, ship-to-ship communications, diagrams, diary entries, etc., relevant to the attack and the events that followed. It has a lot of illustrated pages -- some with only a few sentences written in stylized waves, some cutaway views of ship interiors, some simply with centered text in a robotic font. So, in spite of its 599 pages, the book is a quick, light read. It's also very plot-centric and fast-paced. My son and I both loved the amount of action and the pacing.

The only thing we disliked was the romance. Kady and Ezra are the main characters, a young couple who had just broken up before the attack. They survive the attack together but are separated. Much of the communication is between the two of them when they reconnect. Both of us found the romance sappy and hard to buy into. But, we liked the story so much that we were both willing to overlook our slight discomfort with that particular aspect of the book.

Highly recommended - A wild ride, immensely entertaining, with a unique presentation. The Illuminae Group is the shadowy group that has gathered the information into dossier form and Illuminae is the first in The Illuminae Files series.

Interesting side note: The entire book is filled with blanked-out swear words, which is noted in the letter from The Illuminae Group that's "attached" to the dossier addressed to Executive Director Frobisher (in other words, the first page of the book) as follows:

Some written materials were censored by the UTA and had to be reconstructed by our commtechs, though profanity remains censored as per your instruction. Sure, the story kicks off with the deaths of thousands of people, but god forbid there be cussing in it, right?

There are, in fact, so many blanked-out words that I made a game of coming up with substitute words that fit the sentences without involving any cursing. Here's an example of one of the sentences in which profanity is eliminated:

I don't recall what I thought at the time, but it was probably something on the order of, "At a signal from his guardian angel, Twinkletoes is out the door like his hair is on fire."

Important addendum: I neglected to mention that the book works as a stand-alone. This is rather crucial information. I absolutely abhor cliffhanger endings and will generally refuse to continue a series if an author doesn't wrap things up. Illuminae was nicely wrapped up, enough so that I found myself wondering what on earth the authors will come up with, next, because clearly it will not be about the same incident (although I do wonder if at least one of the characters will be involved).

©2015 Nancy Horner. All rights reserved. If you are reading this post at a site other than Bookfoolery  or its RSS feed, you are reading a stolen feed. Email bookfoolery@gmail.com for written permission to reproduce text or photos.
Posted by Bookfool at 3:04 PM