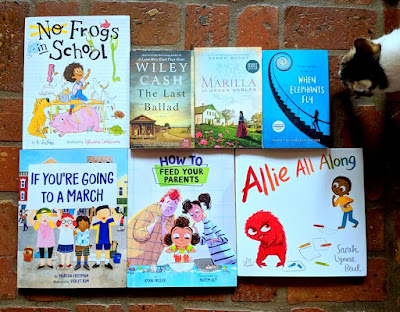 
The Last Ballad got the biggest squeal, but the package of 4 Sterling children's books was the most fun to open. Who doesn't love a fresh, crisp, parcel full of new books?


I had a seriously fun reading week: two novels, 5 children's books, liked or loved everything.


I'm enjoying all three of these and have bookmarks in a few more (but didn't touch them, this week). The Muse is this month's F2F discussion book. I was reading a scene set in a Spanish mansion in 1936, at one point, and became so immersed that when I looked up from the book I was surprised and disappointed to find that I was not really, in fact, in a Spanish mansion at all. Unpunished Murder is great but I need to figure out what age it's geared toward. I'm finding the book is filling in some gaps in my historical knowledge base but it's a little heavy for younger readers, in my humble opinion. However, I don't know what the intended age range is. I just started From the Corner of the Oval, this weekend, and haven't gotten far but I'm looking forward to learning a little about what it was like to spend time working alongside President Obama.


Only one post because I was feeling that creeping addiction to social media that I sometimes get. I decided maybe it would be best just to walk away from the computer completely, so I did. Staying off Facebook was about 95% successful. Twitter, not so much. I enjoy Twitter more than Facebook, though, and I did reduce the amount of time I spent reading tweets so I'm happy. Of course, this does mean I've thrown myself behind on the book review front, but I'm almost always at least 2-3 books away from catching up so I'm not worried. 4 of the 9 books I need to review are children's books that arrived, last week; they'll be quick and easy reviews.

Last week's television watching was a little strange. I decided I really wanted to see my favorite Doc Martin episode and I was sure I knew how to find it. I was wrong, unfortunately. I kept looking for it and watching episodes that were not the right one. The net result was about 6 hours of Doc Martin viewing without ever finding the episode I was looking for. But, I like Doc Martin, so it wasn't exactly painful.

The only other television I watched was a show I watched specifically because it was advertised as one of Benedict Cumberbatch's early roles. The two-part movie series was called Fields of Gold. From IMDb:

A two-part conspiracy thriller about an eager young photographer and a bitter tabloid hacker who are sent to investigate mysterious deaths at a cottage hospital.

The bitter hack journalist is played by Phil Davis (at right in the photo), who plays Jud in Poldark. If you watch it only looking for Benedict Cumberbatch playing an exciting role, you'll be disappointed. I was a little stunned when he finally appeared and was on-screen for maybe 10 seconds. Not quite as advertised. But, there's an urgency to the story, which is about a young man trying to make a point about genetically modified plants and instead setting off a plague, so I really enjoyed it. Just don't watch it looking for Cumberbatch. He hardly appears at all.

©2018 Nancy Horner. All rights reserved. If you are reading this post at a site other than Bookfoolery or its RSS feed, you are reading a stolen feed. Email bookfoolery@gmail.com for written permission to reproduce text or photos.
Posted by Bookfool at 3:51 PM