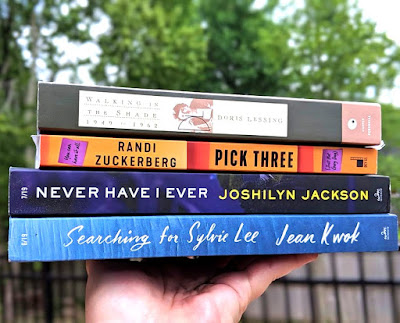 
Walking in the Shade is an older title that I got for $1 at Off-Square Books in Oxford, MS. We went there to visit Kiddo and deliver a few things he left behind when he returned to his apartment after a break between the spring and summer semesters. We had a great time visiting. Walking in the Shade is the second of Doris Lessing's memoirs; I don't own a copy of the first, but I can't find the first memoir at a cheap enough price to suit me so I will probably just read this one and be happy or see if my library system has a copy, when I'm ready to read it.

Pick Three was a surprise. When I opened the box, my first thought was that I couldn't possibly have requested it because it's not my kind of book. Did I hit the wrong box on a request form? And, then I saw the letter inside and confirmed that I didn't request it. But, I sat down and read a few pages and I'm much more intrigued than I expected to be. The other two were requested from HarperCollins and I've been looking forward to both.


Rules for Visiting is going on the favorites list. It took me a while to warm up to the writing style, but once I did I absolutely loved the story. It's a warm fuzzy of a book, about gardening, friendship, and reaching out to make friends after years of hiding from the world.


I read a few of the cat poems, this week, but it's an odd selection. Some are wonderful; some leave question marks hanging over my head. Finding Orion is yet another middle grade book. I'm enjoying it but not massively in love. It starts better than the others I've read recently, though. The Unspeakable Mind is frustrating me a bit. In books about psychology, authors will often introduce a case to describe a particular aspect of the psychology topic in question but not wrap up the case in a satisfying way. A psychologist friend of mine, Greg Moffatt, wrapped up his case studies so nicely that I actually wrote to thank him, it was such a relief. Unfortunately, Shaili Jain does the typical introduction without bothering to take the stories to a conclusion. So, you may learn about some guy whose PTSD caused him to drink heavily who recovered, for a time, and then suddenly started drinking again because something triggered his PTSD (this is an actual example) but then the author doesn't tell you what happened. Did he ever reach the point that he was able to stop drinking, again? Did he continue drinking and stop therapy, then lose touch? It doesn't matter what the result was; a line or two to let the reader know how the story ended is something that I think is a necessity but one that's all too frequently skipped.

I've just started If I Die in a Combat Zone. I was sitting on the floor, picking up cat toys after I spilled a basket of jingle balls in front of a set of bookshelves, and saw a couple of Tim O'Brien books on the lower shelves. I chose If I Die in a Combat Zone and it turns out Going After Cacciato is the award-winning and better-rated book, but that's OK. I've meant to read more Tim O'Brien for years and I like the idea of reading something about war on a day in which we celebrate the memory of those who died in service.

We're still watching The Royal but I can't find a DVD cover for Season 3 to post, here, so I presume it hasn't been released on DVD. Strange, since the 4th and 5th seasons have just arrived for streaming . . . on BritBox, I think. Tragedy just struck and an important character was killed. Well, I cried. 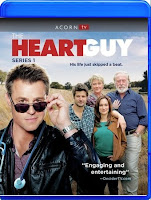 We also started watching The Heart Guy, an Australian series about a partying heart surgeon in Sydney who gets in trouble and is sent to his hometown to work as a GP for a year as punishment. It's hilarious.

I watched the season finales of NCIS and Chicago Fire (everyone dies . . . maybe). And, then Thursday came and I felt a little bereft knowing that The Big Bang Theory will never return, except in reruns. In the past, we've watched the entire series from beginning to end but I missed some episodes, this year, so I'm ready to watch it all over again from the beginning.

I've only recently become hooked on Chicago Fire and I looked to see if it's available for streaming (without having to purchase anything). Nope, not on any service I subscribe to. Disappointment. Maybe someday.

Yesterday, we watched To Catch a Thief, which I think must be in my top 3 favorite Hitchcock movies (along with The Rear Window and North by Northwest). I started thinking about Grace Kelly/Princess Grace and wondering when she died, how old she was, how long she acted – all things I'm sure I read about in the past. I hadn't given her a thought for a long time. She was only 52 when she died and acted for a mere 7 or 8 years, before marrying a prince, but managed to go from being described as "boring" and "vanilla" to winning an Academy Award during that time. Impressive. Cary Grant described her as his favorite actress because, "She had serenity." I think that comes across in her acting.


©2019 Nancy Horner. All rights reserved. If you are reading this post at a site other than Bookfoolery or its RSS feed, you are reading a stolen feed. Email bookfoolery@gmail.com for written permission to reproduce text or photos.
Posted by Bookfool at 12:59 PM