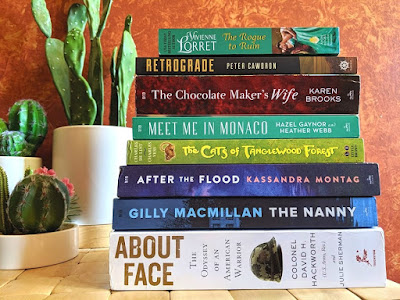 
Well . . . not as bad as I anticipated. I got 8 notices from UPS about separate parcels, one day, and I thought, "Ohmygosh! Eight books!" It turned out all four of the HarperCollins books came twice. I've offered the duplicates to a local blogger friend and if she doesn't want them I'll find them all nice new homes.

Retrograde was bought on a whim, although I've been watching for recommendations for good sci-fi titles. The Cats of Tanglewood Forest was on my old wish list at Paperback Swap. When I left PBS, I wrote down the titles I was still waiting on and I hacked away at the list, for a while, but then lost it in the laptop files when the laptop died. I don't know how I was reminded of it, but I must have seen it in a friend's stacks, somewhere. About Face is to share with Huzzybuns. It was mentioned in Extreme Ownership, the book he talked me into reading, recently. Wow, that's a serious chunkster!


Yay! I finally finished The Unspeakable Mind! And, it was good, very informative. The Haunting of Henry Davis is a middle grade book I'll be touring, tomorrow. And, Strange Weather in Tokyo was just for fun. I enjoyed all three for entirely different reasons.


Yep, just one book. But, that's because I finished Strange Weather in Tokyo last night and haven't started on my next fiction read, which is going to be The Bookish Life of Nina Hill by Abbi Waxman (also a tour book, due to be reviewed on Thursday).


There was no Fiona Friday because of the holiday weekend. Family kept me busy. Fiona Friday will be back, this week. In the meantime, here's a cat photo: 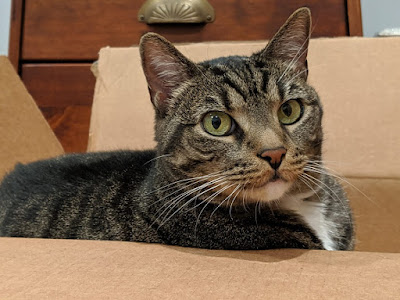 That photo was just taken about a hour or two ago, after I brought Fiona home from a weekend in the veterinary hospital, where she was given activated charcoal and fluids after she munched on the leaves of a daylily (every part of the lily is dangerous to cats — just brushing against the pollen of a lily can kill them). At this point, she's looking good. She's conked out at my feet after having trouble settling down. She's very excited to be home. We have to keep an eye on her for a couple more days, but I think the worst of the danger has passed. So scary. Husband was not aware they were toxic and set down a box of daylilies on the kitchen floor. He knows, now. Those were some expensive lilies.

We finished Season 3 of The Heart Guy, also known as Doctor Doctor in Australia, last night. And, I found out there's going to be a 4th season! Yippee! But, we'll have to wait a while, I guess. I don't know if they've even filmed it. Love this series.

Most of the weekend was spent working on cleaning the master bedroom, hanging out with family, and worrying about the cat. I told Huz I could stand to have some shelves over the bed, so that I have a better place to keep my TBR stack, and he noted that I needed to clean the bedside table of the books I'm not reading and neaten that up, instead. So, I did that. Oh, it looks fabulous! I now have my entire July stack plus my backlog of ARCs and the books my F2F book group is reading all lined up in a row with granite bookends. He's right. I didn't need any more shelves; I just needed to put away the books that have been sitting there, gathering dust. Lots and lots of dust. Even if the right books had been on the table, it needed cleaning.

I removed the Twitter app from my phone because I thought I my time spent on Twitter was getting excessive. I don't know if it was removal of the app, the holiday weekend, or both, but I have hardly been on Twitter, since.

©2019 Nancy Horner. All rights reserved. If you are reading this post at a site other than Bookfoolery or its RSS feed, you are reading a stolen feed. Email bookfoolery@gmail.com for written permission to reproduce text or photos.
Posted by Bookfool at 3:56 PM