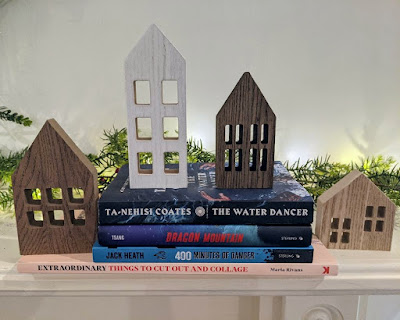 Recent arrivals (top to bottom - click on image to enlarge):

This is also my first stack photographed with the Christmas decorations! I bought the wooden cut-out houses at Target and have them pretty much everywhere -- in the bedroom, on the mantle, and on the entertainment set. I've left them as is but we liked them so much that Huzzybuns encouraged me to buy some extras to decorate for different seasons and I'm looking forward to painting some snow and lights on a few for winter, pumpkins and ghosties for fall, flowers for spring/summer.

Well, this just hasn't been my month for quantity. Hopefully, December will be an improvement. On the plus side, I am still enjoying everything I read. This has just been one of those months in which I've been either too tired or too stressed to read at all, many days. I'm fine with that. Sometimes you just have a bad month. Moving right along.

If Cold Granite doesn't sound very much like my type of book, it's deliberate. I figured after a sluggish reading month I needed to shake up the reading to get myself back into the swing of things. It seems to have worked. Saturday night was the first night in ages that I've read more than a handful of pages. Yesterday, I added One Day in December because I'm ready for some Christmas reading and happened to have that one handy as an e-book (so that will be my e-read for the month). I'm enjoying it, also. So far, so good.

Because I've been kind of stressed and not felt up to reading, I've watched a lot of movies, lately. I think this is everything but I can't be 100% sure.
Never Kiss a Man in a Christmas Sweater was cute and I thought the two actors were OK together but his hangdog look at the beginning of the movie became a tiny bit tiresome. And, the heroine smiled so much it's amazing her face didn't break. Still, I enjoyed this one. While not a favorite, it was pleasant without becoming so saccharine that it was unbearable. I did think it was bizarre that the heroine had such a huge home, given her job description, but she was divorced so maybe the first hubby was wealthy. He was never around during their marriage, she said, so that seems likely.

Heart of the Holidays was my favorite of the Hallmark movies we watched. I thought the heroine was a particularly good actress (actor?) and while the theme, "Hardworking woman becomes reacquainted with her old sweetheart who is more relaxed than she is; will they be able to work it out?" has been overused, I thought the actors had enough chemistry and their timing was so perfect that it helped overcome some of the problems that tend to niggle at me when I watch Hallmark movies. I will deliberately be looking for more movies with Vanessa Lengies (just looked up the heroine). She was terrific.

A Christmas Tree Grows in Colorado had a terribly weak premise. The town of Brooklyn Colorado is in need of something big to draw in visitors and they mayor and his daughter, who works for him, have decided that they must find the perfect evergreen tree to draw in a crowd. Unfortunately, the perfect Christmas tree is on private land and the heroine has already become acquainted with the man who owns the land. Was she trying to butter him up to steal his tree?
We got a phone call in the middle of this particular movie and muted it, for a while. I found the heroine painfully bubbly and decided I liked the movie better with the volume off . . . till the couple had a big fight at the mayor's office. At that point, we both became curious and tried to unmute the TV at the same time with 2 different remotes, cancelling each other out and putting it back on mute. But, once we figured out what was happening (which only took seconds), we enjoyed the rest of the movie.

And, finally, we watched the 1987 version of Overboard starring Goldie Hawn and Kurt Russell, an old family favorite. We still have it on DVD somewhere around here. But, it was streaming and we hit it right at the beginning. At one point, the Roku reset and Huz said, "We may have to get out the DVD to watch the end." Well, good luck finding it, I thought. Fortunately, we were able to reboot the Roku and return to the same location in the movie. Anyway, it was as fun as always. I love Overboard. I'm also a fan of the newer version and confess I was shocked at how well the remake was done.

We also watched an episode of Vintage Roads Great and Small and the first episode of the second season of The Mandalorian. Told ya I watched a lot of TV.

During the past couple of weeks, we also ended up with a new (used) car that I'm calling my husband's "Midlife Crisis Car". It's cute, sporty, and totally different from our usual understated, stripped-down Hondas (I am not normally into all the bells and whistles). This has meant a lot of, "Hey, you want to go for a drive?" is happening. And, while you do really feel the road in this new car, it's definitely fun to ride in. I haven't driven it, yet, because it's a 6-speed and I feel like I'll need to practice on a quiet day, which hasn't happened, lately. The traffic has been horrendous. It has a great sound system and it has turned my husband into one of those weird guys who have to keep their car exterior clean and polished, but that's not a bad thing. He's usually a very messy guy and this is the first time he's ever said, "Nobody can eat in this car." Awesome.

Hope all my American friends had a great Thanksgiving! We were on our own, just the two of us, and the weather was perfect so we had a good day, a nice meal but not a traditional Thanksgiving dinner, and we hope to make up for the lack of gathering in 2021.

I've got a couple of reviews to post, this week, then I'm going on a blogging break, starting Thursday, and lasting until I've actually finished a few books. I don't know how long that will take. My reading is going much better than it has during the rest of November but Cold Granite is pretty thick and I have no idea how many pages are in One Day in December. So, maybe a few days, maybe a couple of weeks, depending on how I feel about my reading. It helps to step away for a while, now and then. But, I'll be back!