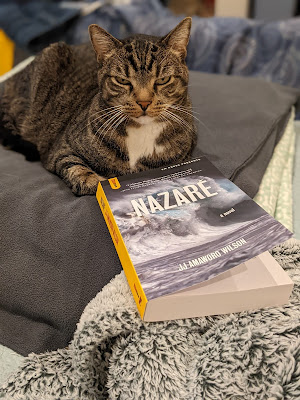 You may have noticed my absence. I think I've finally reached the point of burnout, so I'm taking a 6-month blog break with one exception. I'll be continuing my end-of-month wrap-ups. I've got a running file on what I'm reading at Bookfoolery, so all I have to do is a quick description of each. If they're like the March reads in brief, they'll almost be full reviews.

Anyway, I'll still be here, regularly updating my books read but just posting once a month through October. But, I had to drop by to mention the book shown above with Fiona, who is going to stare at you till you buy a copy. Haha. Kidding. She's a sweetheart.

But, it's true that I loved Nazaré by JJ Amaworo Wilson so much I couldn't stay quiet. It is nuts. Think a mix of the magical realism of Gabriel Garcia Marquéz with the absurdity of Cervantes in a fictional land where the mayor's family has owned pretty much everything for 4 generations.

Kin is a homeless boy who lives in a shipping container in a fishing village with no name. The people of his village in fictional Balaal have been ruled by the Matanza family for 4 generations, ever since gold was discovered and the first Matanza decided he wanted it all. When a whale washes up on the beach, Kin calls the villagers and they try to get the whale back into the water but nothing works. A local mystic declares Kin the "future of Balaal" and nobody knows exactly what that means but everyone trickles away. After Kin is left alone, something happens to return the whale to the sea and the current Mayor Matanza decides he must get rid of Kin, who clearly has some sort of magical powers, to protect his position and wealth. Because if Kin is the future of Balaal, the Matanzas are the past.

What follows is Kin's journey from being a homeless waif to a leader of the war to remove the mayor and imprison him for all his crimes. But, it's not like your typical war. It's more like a circus with weapons. Point being, this book is unique and magical and bizarre and I loved it. There is some violence (Mayor Matanza and his brother The Butcher are not nice; plus, there's a war) but it's also occasionally smile-inducing. The author has a great sense of humor.

Highly recommended - And, I really am leaving Fiona to stare at you. Particularly recommended to anyone who adores Gabriel Garcia Marquéz. Nazaré isn't quite as ponderous as 100 Years of Solitude, just FYI. I gave the book 5 stars and regret not getting around to reading it in the fall, when I accepted a few too many obligatory reads (the ones that burned me out, I guess). Nazaré was released late in 2021. Nazaré is one of those rare books that I was thinking I wanted to reread when I was only 1/3 of the way in. Also, if you do read it . . . find me. I want to talk to someone about this book!!

I received a copy of Nazaré unsolicited but I can't find a sticker on it to tell you where it came from. Thanks to whoever sent it to me!

Everything I read in March (in brief . . . with daffodils) 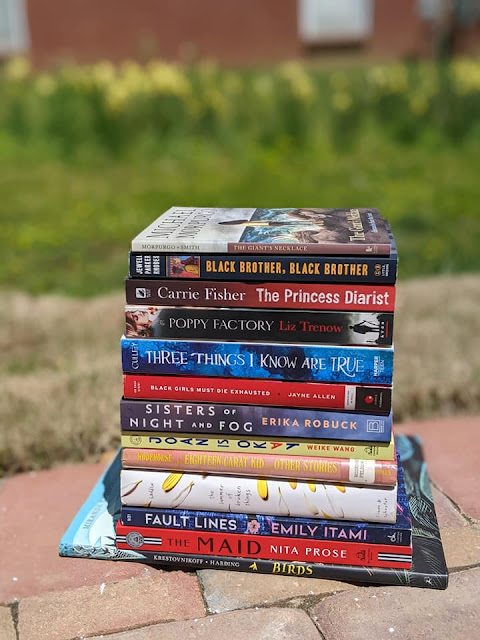 No, of course they're not lazy bums lolling around with catnip toys. 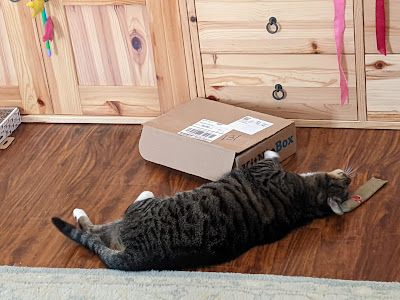 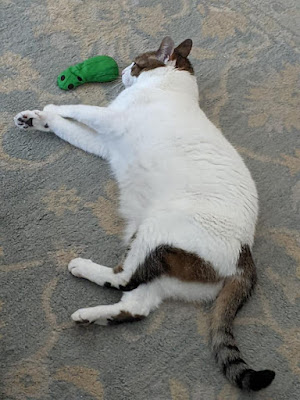