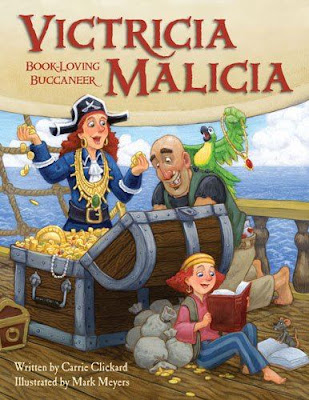 Victricia Malicia, Book-Loving Buccaneer by Carrie Clickard
Illustrated by Mark Myers
Copyright 2012
Flashlight Press - Children's (Ages 4-8)
32 pages
Last review for Children's Day, a wee bit late because the afternoon heat turned me into a big lump of blah and I got a bit sidetracked (bought groceries, fixed supper, watched a movie).
Victricia Malicia is about a girl born to a family of pirates. But, she really just wants to read and live on dry land:
Victricia Malicia Calamity Barrett
was born on the deck of the Potbellied Parrot.
Her mom was the captain. Her dad, the ship's cook.
Her grandma was proud of her peg leg and hook.
But despite a tradition since sixteen-o-three
for every last Barrett to set out to sea,
plund'ring and looting
and pirate pursuiting,
Victricia detested it vehemently.
Victricia Malicia was sick of the sea.
Those are the words on the opening page. You have to love this book right off the bat because the author chose to make Victricia's mother the captain and her father the ship's cook, don't you?
The text of Victricia Malicia is so terrific that I feel like just describing it is kind of pitiful, but I'll go ahead and tell you about it, then you can dash off to read the pdf of Victricia Malicia and see the whole thing for yourself. Basically, it goes on to say her distaste for the sea was not her family's fault, "They raised her up right. They gave her a name filled with menace and fright," and describes how she learned her first words from a parrot, learned to tie knots from Uncle Hank (whom she's tied to the mast), etc.
In spite of all her wonderful pirate education, Victricia taught herself to read -- and reading was simply her best skill. She's shown falling from the rigging because she's not great at tying knots. With wrinkled nose, she's shown trying to cook but her cooking, the book says, "caused rats to abandon the ship." Here is where the book begins to be a real booklover's joy. When Victricia is falling from the rigging, you see a book hanging on the ropes. I turned my copy of Victricia Malicia to read the title and laughed. It's Macrame for Beginners. When she's shown cooking, the book beside her is Betty Wanna Cracker Cookbook.
As the story continues describing Victricia's un-pirate-like preferences, both real book titles and funny fake ones are shown.
Eventually, Victricia causes an accident and everyone agrees she should be let off at an island. But, then the same thing that caused the accident saves everyone from a sea serpent. Still, Victricia would rather be set on dry land and she's taken to shore. She goes into town and opens a bookstore. Now dressed in landlubber clothing, Victricia even reads to the pirates when they're in port -- and turns the entire crew into such reading addicts that the ship becomes a floating library.
My thoughts:
What a fun book! Bright, cheerful illustrations in vivid colors, clever writing with some challenging vocabulary words (opportunities to teach!) and a great storyline make this comfortably rhythmic book a delight. All the book titles crammed into its pages make reading the book doubly fun. Highly recommended.
There's a trailer for Victricia Malicia at the Flashlight Press website. I usually don't care much for book trailers but I enjoyed this one.
I received my copy of Victricia Malicia unsolicited from Flashlight Press. My thanks to the people at Flashlight! Since you can't pick up the book and feel it, I'll just tell you their books are hardcover with jackets but you can toss your jacket aside if you're worried about it. The cover beneath is identical. Inside the book, the front endpapers have a cutaway view of a ship with objects and actions (like walking the plank) labeled. The back endpapers look like an unlabeled treasure map. Cool.
That's all for Children's Day! It's 11:38 PM. Whew! Cutting it close, eh?
©2012 Nancy Horner. All rights reserved. If you are reading this post at a site other than Bookfoolery and Babble or its RSS feed, you are reading a stolen feed. Email bookfoolery@gmail.com for written permission to reproduce text or photos.
Posted by Bookfool at 2:52 PM