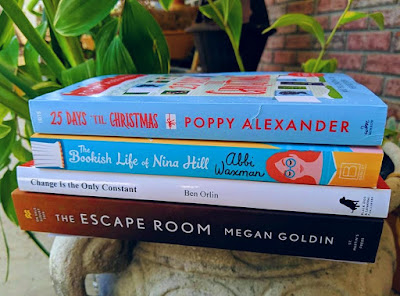 
OK, this is an odd bunch but a fun one. 25 Days 'Til Christmas is not one I recall being offered and the letter included in the envelope implies that it's unsolicited for a Christmas in July-type promotion. I'll have to reread the letter to clarify the timing but I'm always up for Christmas reading in the summer. As a child, I remember doing Christmas in July at church. I have no idea what that was all about, anymore, though. I think it was maybe a way to do good in the middle of the year so that all the fun gifting wasn't saved for one particular month? When I switched denominations (to my husband's) that practice seems to have stopped.

The Bookish Life of Nina Hill is one I definitely recall requesting. I just need to check my calendar to make sure I know when to post if it is, in fact, a tour book as I recall.

Change is the Only Constant and The Escape Room were both received via Shelf Awareness, which I'm currently trying to avoid because I have a backlog and need to get caught up before I go around signing up to read more, although . . . I confess I did sign up for a couple romance tours, a week ago. Ooof. Both were by authors I've been eager to give a go.


I hope to review both of those this week, but if not this week I should get them reviewed by the following week. Fortunately, I'm not too far behind on reviewing, at this point -- just reading. :)


Interesting side note: I discovered (after renewing our Sam's membership specifically to buy tires for Kiddo's car) that Sam's Club has copies of the same version of the The Mueller Report that I'm reading. If you have a membership, you should grab a copy. I'm not even kidding.

None. Well, that's unusual. Not even a Fiona Friday post? Nope. Not a thing. We were a little rushed getting ready to leave town but I don't recall why I failed to pre-post anything. I must have been frantically doing house cleaning because laundry and packing alone aren't enough to keep me from the blog.

At any rate, we were gone for a week and when we returned on Friday, I didn't have it in me to stagger to the computer to post. Saturday, we had some errands to run and then I didn't even think about the blog. I was certain my computer was still off but apparently the spouse turned it on at some point and fiddled or I would have dragged myself in here to post a cat photo, even though I didn't see the cats all week (they were very happy to see us and followed me everywhere, so I did take some new photos). So, it was a laziness issue. Oh, well. Next week is a new start, every time.

Here's where we were: 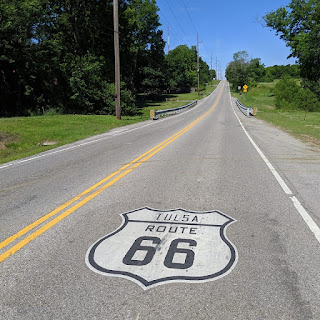 Well, that's where we were on the last day of our trip to Tulsa, when we decided to travel Route 66 from the Blue Whale at Catoosa, OK to downtown Tulsa. This is by far my favorite photo. There was literally nobody on the road but us. I stood in the middle of the lane to snap that picture, no hurry, no problem. We were home for a final trip as Huzzybuns' mother was preparing to move to another state. So, it was goodbye to the spouse's childhood home -- which was nice, since I never did get a chance to say goodbye to my own childhood home -- and goodbye to Tulsa, where we'll no longer have a place to stay. I'll miss having a home base in Tulsa but we're looking forward to visiting Mom-in-law in her new home. Apparently, we already have a date for our first visit. Woot!

No TV, no streaming, no movies. We boxed up the TV on the first day and didn't really feel like watching TV in our hotel room, so it was a TV-free week until we got home. And, then we just watched a couple episodes from Season 2 of The Heart Guy, which is our new addiction. Love that show.