Whose Number is Up, Anyway? by Stevi Mittman (and other stuff) 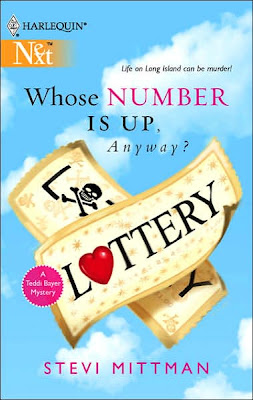 Whose Number is Up, Anyway? by Stevi Mittman
Release date: August, 2007
Harlequin Next (fiction)
230 pages

I arrive in my driveway at the same time my father pulls up at the curb. he's there to watch the Met game with Jesse, who doesn't have the heart to tell him that he's gone over to the dark side. He's now a Yankee fan.
"Once a week I can like the Mets for Grandpa," he tells me, reminding me why it is I still like the kid. "Sometimes you have to bend the truth a little for someone you love."
It's taken me years to learn what he already knows at eleven.

Whose Number is Up, Anyway? is the fourth complete novel in the Teddi Bayer series, a light-hearted series about a mother of three who solves mysteries while working in a growing decorating business and juggling a trio of hot men. In the latest installment (Teddi has also appeared in two anthologies and two free online reads at eharlequin), Teddi finds herself at the scene of what appears to have been a simple heart attack. But, the dead man in question is in an awfully odd place - the freezer at a local meat market. Teddi smells a mystery, but her detective friend and sometimes lover, Drew Scoones, dismisses her theories.

Undaunted, Teddi tries to quietly investigate the death of the man, whom she recognizes as a league member at the bowling alley she is decorating. When a doctor is killed in the parking lot of a local hospital and it turns out there's a connection between her and the victim in the freezer, Teddi becomes even more determined to solve the crimes.

Not that anyone else believes the guy in the freezer was murdered. Teddi must constantly prove herself, in spite of her success rate. I think that's one thing I like about the character: she's determined and undaunted by the skeptics that surround her, but she's not quite as bumbling and stupid as a lot of similar heroines (although you can expect the occasional pratfall). Her family is also an important part of the character mix, chiefly the crazy mother who is impossible to please and the ex-husband who still doesn't quite understand why she left him.

Whose Number is Up, Anyway? was the perfect antidote to the downers I've recently read and it's an excellent summer read - nice and light. I love a bit of a chick lit upper, now and then, and the timing was perfect. The one thing I'm really curious about is . . . how long will Teddi keep Drew hanging? Is the author going to keep this series going eternally, like the Stephanie Plum series? Because I enjoy the series, but I felt like the way Teddi avoided commitment in this particular book hinted at the possibility of, "I'm going to keep this series going forever" syndrome. There came a point in the Stephanie Plum series that each book began to take on the feel of a rerun - same old, same old . . . and never with a satisfactory conclusion to Stephanie's man problem. So, I stopped reading the series. My hope is that Stevi will not drag out the series forever. However, I'd also like to see her obtain the success of Janet Evanovich; I think her books are every bit as entertaining as the Stephanie Plum books and I'm hoping Stevi will eventually branch out and offer up some different characters.

*UPDATE* - I neglected to say that I thought the ending was wonderful and it had me yearning to rush out and buy the next in the series (which, of course, will not be available for quite some time). The next title is "Who Creamed Peaches, Anyway?" and it has a general 2008 release date. I should also mention that Teddi does change and grow throughout the series. I love Stephanie Plum and her wacky family, but she doesn't really alter much from one novel to the next. Teddi does; and, in that way, I think she's actually a much better character. Don't tell Ms. Evanovich I said that.

Note that this is yet another book with a decorator, but I loved it. I think that whether or not I like a book with an interior-decorator protagonist has a lot to do with detail: too much chatter about the furnishings, the paint colors, the flooring and accessories is all filler and a total yawn. The Teddi Bayer series provides a nice balance, heavier on the mystery than visual detail.

4.5/5 - loads of fun; avoid if you can't stand fluff, but I think it's a perfect summer vacation read. 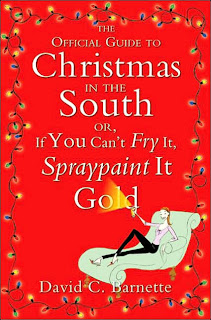 Also finished: The Official Guide to Christmas in the South or, If You Can't Fry It, Spraypaint it Gold.

This is one of the titles I snatched up for $1 at Borders' big sale of remainders and I'm glad I grabbed a copy. There's not a lot to it (not a lot of text, that is - it's a quick cupcake of a book) but it's hilarious, particularly if you've experienced Christmas in the South. I couldn't help thinking, "Oh, hey, those candles I got from my friend J. are such a perfect example . . . wax pinecones with a faux-gold finish."

The whole book is very much tongue-in-cheek, but that doesn't keep it from having the ring of truth. In the section, "Translating the Morsel Code", for example, are these descriptions of the gifts of fudge, baklava and divinity:

Fudge: From the heart. Often an overweight heart. Sometimes a bless-her-heart. But nothing warms the old ticker like a slab of well-greased fudge.

Baklava: A studious gift. Often is associated with an invitation to join a book club, the horrible kind, perhaps a Great Books study in a house that smells of mothballs and garlic. Baklava givers also tend to be active in arts fundraisers. Enjoy the honey and get out your checkbook.

Divinity: What, pray tell, is divine about a candy that tastes like nothing but egg and sugar and can only be made under the rarest of climate conditions? No one really knows, but it remains one of the ultimate candy gifts. Topped with whole pecans? You're the best. Topped with pieces of pecan halves? Bad market. Mixed with crumbled pecans a la cookies and cream? The giver is a Yankee.

Still reading: Great Expectations by Charles Dickens . . . and loving it! Sometimes, I'd like to give Pip a good shaking, but I still think he's funny.

Once I get the husband shipped off to Australia: I think I'll leave him there. No, no, that's not what I was going to say. I meant to say I'm planning to reread Held at a Distance from the beginning and try to keep an emotional detachment from it, this time around.

Yes, it's true: The spouse is going to yet another country that's on my life-long wish list, without me. I still haven't forgiven him for Italy.

Then, again, he's been buying things like insect repellent, snake-bite kits, thick socks to go inside leather boots (I pointed out that the leather is soft enough for a good set of snake fangs to bite right through - you'd have loved the look on his face) and 1000 SPF sunscreen. Actually, we couldn't find any sunscreen with a higher SPF than 50, so I've told the hubby he has authorization to buy himself some Australian sunscreen and a wide-brimmed hat. He also plans to squint a lot and grit his teeth to keep the sand out.

The most important thing to take to Australia, according to the spouse: Someone who runs slower than you do. Gosh, I can't wait for the anecdotes he'll have to tell.

It may be safer in Mississippi, but . . . a black widow spider jumped out of my garden, a few days ago, while I was watering the plants. Guess who hasn't felt like weeding, lately?

Coming up: The latest Wahoo! Wednesday post - after my afternoon reading siesta and that last bit of washing and drying of laundry for the husband to pack.