Silence of the Songbirds by Bridget Stutchbury 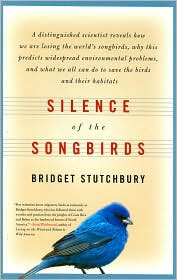 What led you to pick up this book? It was an impulse check-out. I love photographing birds but have noticed I'm not seeing anywhere near the quantity of birds that I saw as a child - or, even 10 years ago. I was excited to find a book about the reasons for declining songbird populations.

Summarize the plot but don't give away the ending. No plot, since it's nonfiction. Stutchbury talks about bird habitats, migration (including how migrations can be seen on radar), nesting habits, etc., and how each of these critical bits of bird life are being interrupted. She talks about their internal radar and why instincts programmed into bird brains for thousands of years are now causing massive deaths (by, for example, running into radio towers and buildings that are in the way of their flight path), how and why the fragmentation of forests makes it impossible for many birds to survive and thrive, and what we can do to help prevent the continued decline and extinction of many types of birds.

What did you like most about the book? The entire book was pretty fascinating, but I particularly appreciated the "How You Can Make a Difference" table on p. 221.

Thoughts about the plot: It's a very interesting book. Sometimes I found myself drifting of for a bit, but that's not unusual with nonfiction reads. It might be that it's a little too dry or that I've been tired - maybe a bit of both. But, I'm glad I hung in there and learned about what's causing the decline of songbird populations (and that of other birds and animals, as well). I didn't realize that dangerous poisons are still used on U.S. crops; I honestly thought bird-killing agricultural poison use was halted when DDT went off the market. I also had no idea we're still being exposed to DDT over 30 years after it was banned. Nor did I have any understanding of migration and why deforestation on migration paths causes massive die-offs (like what we experience on road trips, birds need to stop to rest and refuel at certain points - and those migration paths are firmly programmed into their brains). Even more surprising was the information about shade-grown vs. sun-grown coffee and how shade-grown coffee sustains life while sun-grown coffee is basically a disaster for the land and natural life as well as its farmers.

Share a favorite scene from the book: I think my favorite chapter was "Coffee with a Conscience," which explains why farmers ripped out the canopies of shade-tree plantations and planted sun-grown coffee (which is bitter and requires increasing amounts of fertilizer due to the lack of self-sustaining nutrients provided by trees and which offers no haven for birds). The author described specific coffee brands that are grown on sustainable farms and for which farmers are guaranteed a reasonable profit. Timothy's World Coffee is one of them. The author's favorite shade coffee, Cafe Oro, is described and she advises buying shade-grown coffee to give as Christmas gifts because it not only has a great message but also provides a better taste than sun-grown coffee.

In general: It took me quite a while to finish reading Silence of the Songbirds, but I hope a lot of people will read it and take action. Anyone who reads this blog regularly is probably well aware of how much I love nature.

4/5 - Excellent writing, if a bit dry. The author does a particularly good job summarizing the hazards to birds and what ordinary folks can do to help slow the dramatic decline in songbird populations.

While I was reading this book, I kept thinking about the movie Real Men (starring Jim Belushi and John Ritter), in which Belushi's character repeatedly reminds Ritter that if the aliens don't get what they want, he can say goodbye to "all the trees, all the birds, all the little flowers," forever (something like that - I couldn't find the quote). Don't ask me why.
Posted by Bookfool at 8:25 AM