Tuesday Twaddle, including buzzy things, a haiku and the weekend that was 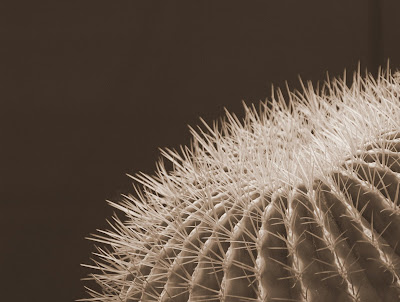 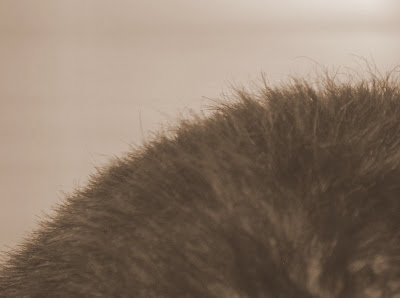 Argh! The beautiful auburn curls with blond highlights are gone! I'm in mourning.

So, about that weekend. Remember I said I had an interesting weekend? Well, I was planning to drive to Oklahoma to work on getting my mother's house ready to sell. But, my friend Paula reminded me (as I was frantically cleaning and packing), "You know, there's no hurry." I took that to heart and gave myself an extra day to clean and pack. Then, I decided to add another day because I'm married to Mr. Chaos and any little bit helps. The cleaner the house, the less damage he can do (and I was really too tired to drive but that's another story). All of which left us with a Monday departure date.

Sunday morning, however, a vicious storm swept through Tulsa with 70 mile per hour winds. It knocked down trees, limbs and power lines. Of greatest interest to me: my beloved in-laws (with whom I planned to spend the night) lost their power. Had I decided to leave on Sunday, I would have run into the storm in Arkansas around mid-day and ended up in a house with no lights or air. So, we said, "Close call. Good thing about the delay." Always looking at the bright side, here. Then, my sister called to tell me not to bother coming till further notice because her husband had somehow managed to knock a hole in a water pipe at my mom's house. It's bad enough doing without power when it's hitting the 90's, but water? No way. I need my bath or I become seriously scary. So, I'm on hold. Sometimes procrastinating can be a good thing.

This means I get to hang out with my lizard buddies, keep cleaning up after my husband (really, I'm looking forward to a break from that), and listen to the buzzing tree. If you know what kind of tree this is, please illuminate me: 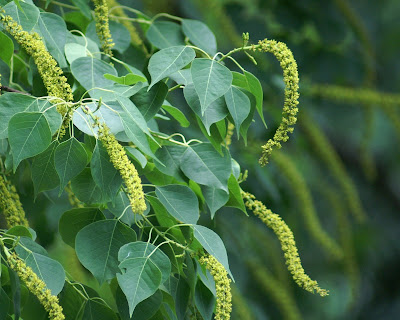 A few years ago, a nasty virus that devastated the European bees in the U.S. visibly caused a population drop of the little buzzers in our area. European bees make the best honey and I recall reading a few rather frantic articles describing how European bees were slowly coming back but mating with African bees, which are not the best honey producers in the world (and not very polite, either -- remember Killer Bees?). So, I was quite surprised, last week, when I stood under the tree and heard a sound that we haven't heard in quite a while -- a noise much like you'd expect from a hovering spaceship or, possibly, a horror movie. It truly sounded like the tree was preparing for departure.

The volume of that buzzing noise is really something; there were literally hundreds, possibly thousands of bees gathering pollen from the tree. The bees are back! And they were swarming all over those pollen shoots. For those who are afraid of stinging things -- no worries. They have absolutely no interest in chicks or dudes standing under the tree with pollen raining down upon their human heads. It's wild. But, I went inside, anyway, because it made me sneeze. I've noticed the bees are a little bizarre-looking; they have an orange spot on their bodies, rather than just the usual black and gold. So, maybe it's a cross-breed that I'm seeing, but it's still nice to see bees, again. I like honey, don't you?

The husband says he doesn't like my new profile photo because it looks frighteningly like the real me -- a cross between a laugh and "I'm going to bite you." What a guy.

The electricians came! Two of them! They were cordial! And, more importantly, they fixed our problem, showed me a couple of burnt metal things and explained how lucky we were that the little zapping popping lightning storms that were caused by the metal arching and the electricity jumping to try to find a connection, scorching everything around them (i.e., the mini fires) stayed inside the power box. Actually, the one fellow was kind of stern when he explained it, but you know. I'm thrilled! Wahoo! I will definitely feel better about sleeping at night, now. Maybe that one should have been saved for Wahoo! Wednesday. Oh, well.

I have a favorite lizard. His tail was lopped off, a couple of weeks ago but it's growing back and he's out on his favorite metal post in the herb garden, displaying away. Why do I love him? He's absolutely not afraid of me. I can lean right down next to him and he'll just look at me as if to say, "Well, hi there, human!" He'll let me sit on the garden border and snap away with the camera. If I talk to him, he turns toward me but never skitters away. I think he might even let me pick him up if I so desire. But, no. I don't want to freak him out. He'll be featured in my wahoos, tomorrow.

A Haiku for the latest contest in the Southern Reading Challenge, allegedly an abbreviated description of The Sugar Queen by Sarah Addison Allen:

There's something in the closet
Someone on the floor
Magic and love in the air
The new piles from the library are so huge that I'm positively intimidated by them. How did I get them home? No wonder my bad shoulder hurts. I haven't managed to photograph the books, so you just get a list. I finished Sway, yesterday, and will review it as soon as I can. Huzzybuns is taking a turn reading it and then the eldest has next dibs, so it's a popular title with this family. Anyway, the new acquisitions:

I know, ridiculous. But, I'm really, really enjoying them and so are the guys.

My tea is cold, and the moon, anchored by the hopes and wishes of those abandoned souls churning their way home from the pub, has drifted deeper into the sky.

Kiddo took this picture through the window of the car, at my request. In light of yesterday's post (and given the similarities between America's current involvement overseas and Vietnam -- not a political creature, but even Mrs. Politically Stupid thinks she has this one figured out), I think it's especially meaningful: 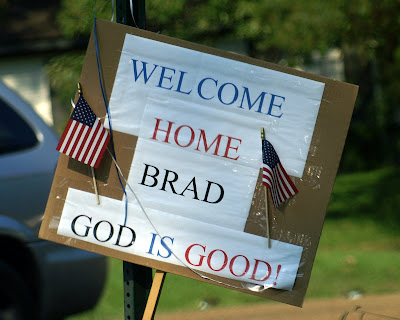 Welcome home, Brad. I don't know you, but I'm glad you made it back. And, hang in there, Nikki.

Wishing all a safe and beautiful day,

Bookfool
Posted by Bookfool at 6:15 PM