I'm on page 150 of this book (a little less than halfway through the book) and it is tremendously gripping. I'd hoped to finish, today, but I've been shot down with a migraine so it'll probably be a day or two. The Blood of Lambs is the memoir of a former PLO terrorist and it's absolutely fascinating (and horrifying). I encourage you to read the excerpt in the sneak peek post, below, if you're even slightly interested as I think this is a very important book about how and why people become terrorists and how they are recruited very, very young and schooled in hatred and killing.

Saleem says terrorists are intelligent, often highly educated people who are quietly growing their cause within our borders, not just dropping in on occasion to blow things up. I think Americans tend to go around in a happy little cloud of ignorance, thinking we're immune to such things, even after the horror of 9/11, hence the word "important". It's notable that the author began his schooling as a terrorist at the age of 7. I hope to write a complete review by Friday.
Just moments ago, I discovered that I was wrong about only taking one poppet photo in Costa Rica. I'd completely forgotten that Nameless Dr. Poppet came out to pose in front of the volcano at Arenal. Look at lucky Poppet! 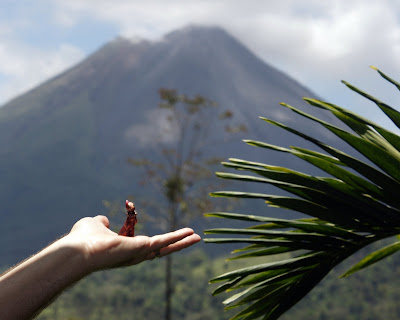 Now, if the volcano had been erupting, I'm not sure what Nameless Dr. Poppet would have thought, but as one of the locals said, "She is sleeping." So, no problem. Hope everyone is having a wonderful Wednesday!
Posted by Bookfool at 6:34 PM

Email ThisBlogThis!Share to TwitterShare to FacebookShare to Pinterest
Labels: not quite a book review