The Sandcastle Girls by Chris Bohjalian and a Fiona Friday pic 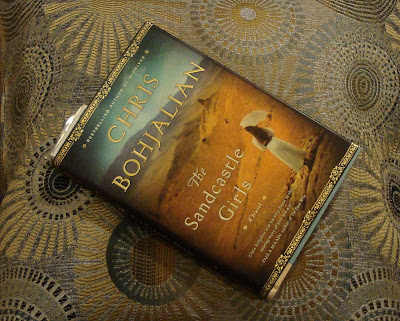 The Sandcastle Girls is a dual tale of romance, betrayal and genocide in 1915, paired with the story of a modern woman uncovering her grandparents' past. It's told partly from the viewpoint of an American/Armenian couple and partly by their granddaughter, who serves as the fictional narrator describing her own story about her childhood and research to uncover her grandparents' experience in Aleppo, Syria in 1915.
I knew absolutely nothing about the Armenian Genocide of 1915 and that genocide is so deeply described that it's almost a character in and of itself. The truth about the genocide is not widely known (although I hope The Sandcastle Girls will help change that) and at least one country doesn't even acknowledge that it occurred; this I learned from the book and the extra materials I read near the beginning, when I was confused about who was killing whom, where and why. A little online research helped me to get into the story. The main characters are an American woman who has gone to Aleppo with some minor training in nursing and an Armenian engineer who managed to escape slaughter but lost his wife and daughter. What did they experience and why did they remain tight-lipped about those years?
Because their granddaughter is the narrator but the story switches from her viewpoint in 1st person to a 3rd person omniscient account, it is actually a little jumpy and can be confusing. The jumps in viewpoint and time period, although not the smoothest, didn't completely ruin the story for me, though. The addition of the granddaughter's emotions definitely added some impact. When she cried, I cried.
Recommended with a graphic violence and disturbing-situations warning. An emotional read, at once gripping, horrifying and romantic with three-dimensional characters, believable dialogue, and a unique setting. Be advised that even with the underlying romantic theme, The Sandcastle Girls is a tale of graphic violence and intensity. The images will stick with you.
I got my copy of The Sandcastle Girls from Goodreads for review (my first "win" from Goodreads!), so I promptly posted my review and then altered it a bit for the blog. After writing my own review, I read a few reviews at Goodreads because I was curious what others thought.
There was a 2-star review that I thought was particularly interesting and well-written. Even though I rated it 4/5, I agree with the reviewer that the alternating viewpoints were jarring. She also brought up the lack of maps. Since I looked up maps and information early in my reading of the book, I'd actually completely forgotten about how desperately I needed them. I had no understanding of the Ottoman Empire and where the events occurred. Going into the book, I really was completely confused. Maps and a bit more background info up front would definitely have helped. I set the book aside until I could make sense of the setting. But, it's not unusual for me to stop reading to look up additional information to round out the reading of a novel in a new-to-me historical setting.
Fiona Friday pic - Fiona thanks us for providing an additional place to scratch; Isabel finds the dolly simply smells interesting. 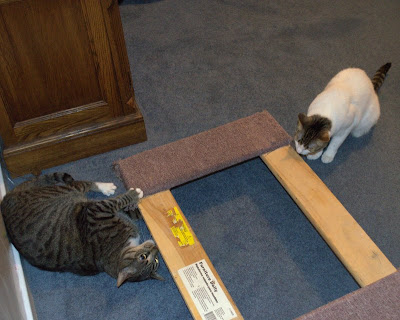 They are still totally into everything, here. The packing has slowed due to illness and I think the cats appreciate it. They don't like a lot of frantic activity. They like a little playtime, a little nap time, a little food. Anything else is just annoying.
Happy Weekend!
Bookfool
©2012 Nancy Horner. All rights reserved. If you are reading this post at a site other than Bookfoolery and Babble or its RSS feed, you are reading a stolen feed. Email bookfoolery@gmail.com for written permission to reproduce text or photos.
Posted by Bookfool at 10:02 PM