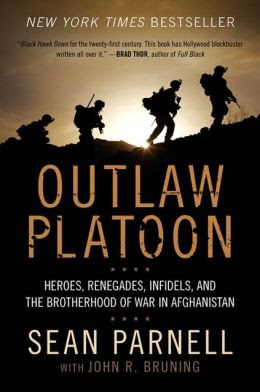 Outlaw Platoon:  Heroes, Renegades, Infidels and The Brotherhood of War in Afghanistan by Sean Parnell with John R. Bruning tells the story of the author's time with a platoon nicknamed "Outlaw Platoon" while based at Bermel Forward Operating Base (FOB) in Afghanistan.  His purpose -- and I think he succeeded brilliantly -- was to clearly show readers what it's like to serve in the army during a time of war.

I was thoroughly impressed with Outlaw Platoon.  In fact, I found it so gripping that it took a few days to recover from the reading hangover I got after staying up till 3AM to finish the book.  Bermel FOB is located on the Afghanistan/Pakistan border, which was an incredibly dangerous place even before Pakistan (our alleged allies) made a deal not to interfere with Al Qaida.

What I liked about Outlaw Platoon:

Outlaw Platoon is beautifully paced and extremely well-written, probably at least in part because it was co-written by John R. Bruning, a man who has done a lot of military writing.  Bruning spent some time in Afghanistan and I'm sure that helped with the descriptions.  Point being, the book is exceptional for its type.  The author avoids the typical military-memoir format (which can get old if you read many memoirs of its type), skipping the description of training and diving right into the soldiers' arrival at FOB Bermel.

When I say the book is well-paced, I'm referring in particular to the fact that there are scenes from everyday life at the base to help describe the people, the life and the circumstances but, for the most part, the book focuses on times that the platoon was attacked -- or, in one case, the base itself.  Those scenes are so vividly drawn that I found my heart nearly beating out of my chest.  The actions, emotions, sights, sounds and smells are acute.  There were even times I found myself actually wrinkling my nose, imagining I could smell the rank odor of soldiers who had been out on patrol with no showers, no change of clothing, sleeping in their Humvees for 5 or 6 days at a stretch.  Ugh!

The wounded and dead were described with every bit as much detail, which may be a problem for a lot of people.  I've read quite a few war memoirs so I handled that fine.  I'm not okay if I see such graphically violent things as limbs flying on a movie theater screen, but I can read about them.  Weird.  At any rate, the violence didn't bother me because I was in the reading to get a good idea of what it's really like in Afghanistan.

It's also worth mentioning that Outlaw Platoon is among the most humbly written soldier memoirs I've ever read.  Those guys have egos; it's drilled into them that they're tough, they're warriors.  They need that confidence to get through the terror, although, as the author and others I've read explain, they're not mentally prepared for the reality.  You get to hear the good and the bad -- the author doesn't hesitate to talk about people who couldn't cope (although he gave them new names).  But, it's not a self-indulgent memoir.  It's about the platoon, the way the men worked together and the fine balance of leadership and teamwork required to keep the team functioning.  Seriously.  So impressed.

What I disliked about Outlaw Platoon:

I get so, so tired of the word "warrior" in modern war memoirs.  As I said, I know it's drilled into them and it's important because they need the confidence instilled in them, but it still gets tiresome.  "Rage" is another word that was used a great deal.  The rage bit is pretty scary, to be honest.  When you read Outlaw Platoon, you will understand how veterans can end up murdering back on home soil, after they leave the service.

Interesting addendum in the paperback:

The author received a letter from a person who also worked at FOB Bermel but did not go out on dangerous patrols.  Parnell refers to the people who seldom leave the base as "Fobbits".  The letter's author expressed his dismay at Parnell's disrespect for the other soldiers, those who don't necessarily spend time on patrol but are still important to the operation of the base and also live in a dangerous place.  Again, totally impressed that the author published the letter and wrote an apology for using a derogatory term to describe his fellow soldiers.  He didn't change the text of the book -- maybe that wasn't possible -- but he did admit it was demeaning and apologized.

Highly Recommended with Graphic Violence Warning - Outlaw Platoon is a rough read.  It's graphic, violent and disarming.  And, yet it's one of the best modern war memoirs I've read -- "modern" meaning from the last 25 years or so.   I have read Vietnam and WWII memoirs but war changes, the way people fight is not necessarily the same and the way people are prepared for war or treated upon their homecoming changes, as well, so I would not compare wars or memoirs between different wars.  I was immensely impressed with the author's humility and willingness to accept and embrace people for their unique skills and traits without judging them.  The author is a Christian (and a Harry Potter fan), but he didn't preach.

Upon closing the book, I found myself wishing that it had a small section on what individuals can do to help make the time of our men in uniform more tolerable.  If I could get in touch with the author, that's what I'd ask.  What can a single person do to make one or more soldiers get through their deployments a little easier?  I'd really like  to know.

My thanks to TLC Books for the review copy of Outlaw Platoon.

©2013 Nancy Horner. All rights reserved. If you are reading this post at a site other than Bookfoolery  or its RSS feed, you are reading a stolen feed. Email bookfoolery@gmail.com for written permission to reproduce text or photos.
Posted by Bookfool at 12:27 AM