A Star for Mrs. Blake by April Smith 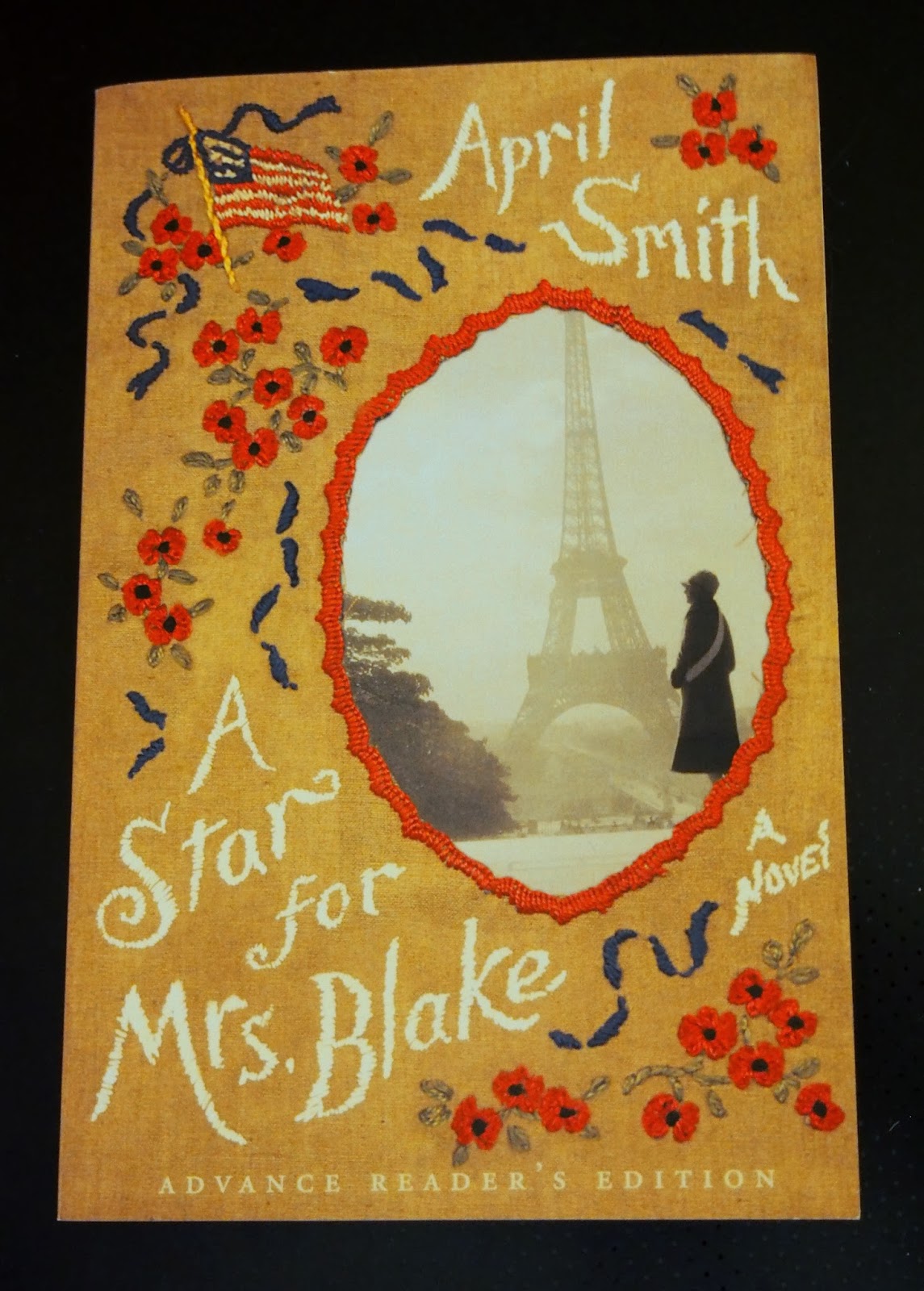 Everything moved too fast and New York City was dirty and full of itself, but Cora's eyes had been opened by being in the heart of it, the movement and roar, the tallness of the amazing edifices, the sun at such an unfamiliar high remove, flat sidewalks that stretched to infinity, mysterious steam shooting up from the middle of the street, diamonds in shop windows, flags of affluence flying from department stores and banks, doormen dressed like English gentry, flowering trees and marble mansions.

~p. 100 of A Star for Mrs. Blake (Advance Reader Copy - some changes may have been made to the final print version)

A Star for Mrs. Blake is a fictional tale based on a true event.  From 1930 - 1933, the mothers of WWI soldiers buried in France were given the opportunity to visit their sons' graves at U.S. Government expense.  Mothers of soldiers killed in the line of duty were known as "gold star" mothers because of the banners hanging in their windows. When a soldier was killed, his family would change out their blue-star banner for one with a gold star, which symbolized death.  I know this practice continued at least through WWII because I have the banner my grandparents had hanging in their window while my father was serving in WWII.  You can read a little about the Gold Star Mother Pilgrimages, here.

Mrs. Blake is Cora, a single mother and volunteer librarian from Maine who came home from college with a baby, a new name, and the tale of how her husband died of cholera. Her son Sammy has been gone for over a decade and now she is taking care of her deceased sister's children. Life in Maine is harsh. She loves the girls but will always miss her Sammy, whom she chose to have buried in France. When Cora is sent a letter about the opportunity to travel to France, she jumps at the chance to view Sammy's grave, see where he died and make new friends.

Griffin Reed is a reporter who hasn't been able to do the job he loves since a horrendous injury took a chunk of his face during the same war that took Sammy's life. He lives in Paris because  he can't bear the thought of going home the way he is, wears a tin mask painted to make him look as normal as possible and is addicted to morphine. When he meets Cora, he is inspired to write an article about one mother's experience.


The way Reed had talked about his hometown, it was sunny all the time and everyone had an orange tree and lived in the desert, where they were scalded into madness by their own greed, which made California sound like a Bible tale with a moral no one could explain.

There's a lot more to A Star for Mrs. Blake than I can possibly go into. A young soldier from a long line of Army men who served heroically is in charge of the group of mothers that includes Cora; and, a young nurse accompanies them to see to their health and well-being. There are several other mothers with dramatically varied backgrounds in Cora's bunch - a Russian who escaped the Jewish pogroms, a poor Irish immigrant, a wealthy socialite and a mentally unbalanced woman who has been in and out of mental hospitals for many years.  Cora has a fiancée in Maine but she's not entirely sure he's right for her.

There are little battles of personality as the mothers tour France and there are plenty of other surprises to the plot.  Griffin Reed doesn't come into the book until well into the story but he's very important because he has a story of his own; and, it is Griffin who helps Cora find peace in a surprising way.

I was a little jarred by the introduction of Griffin Reed because I was accustomed to the book being about the mixing of personalities and the various stops on the pilgrimage but Reed's presence added a new dimension to the story, both because of his importance to Cora and because he is a man who was permanently damaged by the same war that killed the young men whose graves the mothers are visiting.

Highly recommended - Interesting characters, well-researched settings and some very surprising moments in A Star for Mrs. Blake made the time and place come to life.  I was unfamiliar with the pilgrimages but now I want to know more.  Entertaining and, at times, deeply moving, I loved the interaction between characters but I particularly loved the exciting bits of tension (spoilery, sorry) and the touching surprises toward the end of the book.  I closed the book with fat tears streaming down my face.

Happy Groundhog Day!  I hear we get six more weeks of winter. I'm okay with that. Winter is great in Mississippi.  A break from pollen and heat and never-ending yardwork!  Squee! The groundhog is usually wrong but one can hope.

©2014 Nancy Horner. All rights reserved. If you are reading this post at a site other than Bookfoolery  or its RSS feed, you are reading a stolen feed. Email bookfoolery@gmail.com for written permission to reproduce text or photos.
Posted by Bookfool at 1:12 PM