A Pirate's Night Before Christmas by Philip Yates, Illustrated by Sebastia Serra 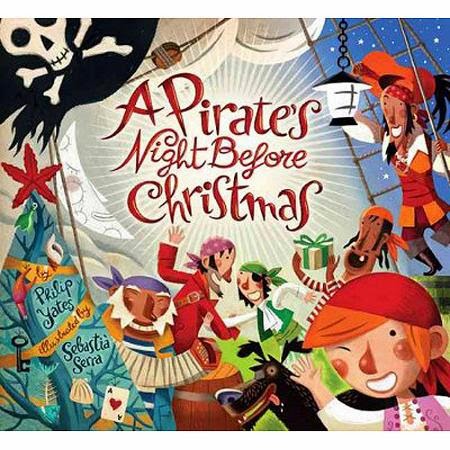 A Pirate's Night Before Christmas by Philip Yates, illustrated by Sebastia Serra, is my absolute favorite of the four Christmas books Sterling sent me for review. It begins with identical meter to the classic poem but instead of Santa, the fellow bringing the bounty on Christmas Eve is named Sir Peggedy:


'Twas the night before Christmas aboard the Black Sark.
Not a creature was stirrin', not even a shark!
The stockin's were stuck to the bowsprit with tar,
In hopes that Sir Peggedy soon would be thar.

The pirates were snorin' like pigs in thar beds,
While visions of treasure chests danced in thar heads.
An' I with me spyglass and scruffy old dog,
Stood watch in the crow's nest for ships in the fog.

You can see from the cover that the illustrations are eye-popping colorful and there's a great deal for a small child to look at whilst an adult reads to him, or for the child to look at on his or her own. The text is a delight. I smiled all the way through the reading of A Pirate's Night Before Christmas and I can't imagine a child not loving it. Even better, there's a two-page "Pirate Glossary" in which pirate and sailing terminology is defined. The final verse:


I laughed an' I danced an' I shouted with glee,
As up went his sleigh an' then down to the sea.
But I heard him exclaim 'ere he splashed 'neath a star:
Merry Christmas, me buckos, an' a Happy New Yaargghhhhhhh!

What a hoot! The paperback is a mere $6.95. I reviewed A Pirate's 12 Days of Christmas by the same author and illustrator in 2012 and loved it. Unfortunately, my husband took it to work and gave it away to a friend with small children, without bothering to ask if it was one I wanted to give away. Arrrrgh, matey. Reading A Pirate's Night Before Christmas makes me want to rush right out to buy its companion. I highly recommend both.

©2014 Nancy Horner. All rights reserved. If you are reading this post at a site other than Bookfoolery  or its RSS feed, you are reading a stolen feed. Email bookfoolery@gmail.com for written permission to reproduce text or photos.
Posted by Bookfool at 7:33 AM