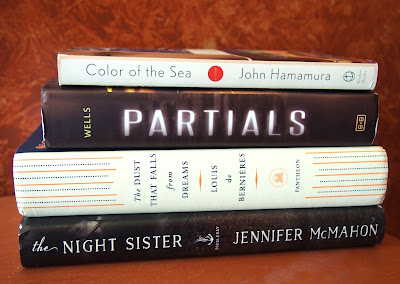 This week I've come to the conclusion that I should never, ever attempt to predict what may or may not arrive in my mailbox and/or announce what I intend to read since -- let's face it -- I am wholly unpredictable, even to myself. I say that both because I accepted a couple books after months of ignoring review offers and thanks to the fact that I read absolutely nothing I said I intended to read, last week. Best laid plans and all that.

Recent arrivals (as shown above): 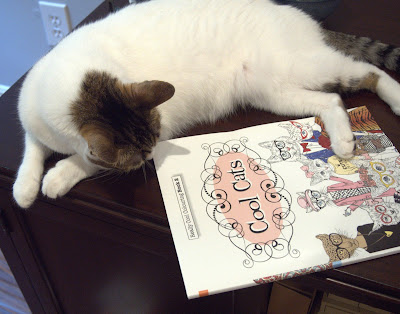 A friend who has recently joined in on the adult coloring craze sent me this wonderful Cool Cats coloring book! How awesome is that? I can't wait to play with it.

Husband recommended that I read On Bullshit when I complained that I simply can't understand how people can fall for the false information that is being spun as reality by certain politicians and it did, in fact, soothe me a bit. At the very least, it explains how a politician can appear to believe the baloney he proclaims to be truth. But, while you're reading the book, you have to question whether the text is an experiment in bullshit, itself. It's a fascinating read.

The Flying Circus is a book that I bought on the recommendation of an author I follow on Facebook. She described the book as "adventurous" and I enjoyed it but found it a little too light on dialogue and heavy on narrative. It has a dominant romantic element that was, I thought, a little tedious 'though ultimately satisfying, and I found several plot points predictable. But, The Flying Circus definitely does have plenty of surprising twists.

Nothing. But, I'm sure that will change. I'm just not going to make any assumptions about whether I'll resume reading one of the books with a bookmark in it or try something new.

I worked on tidying some of the many possessions our youngest son has brought home to store during the time he's taking a course in Memphis while Kiddo and Huzzybuns did the final bit of packing and scrubbing of his college apartment, this weekend. So, not an overly exciting weekend but we all got a lot accomplished. It feels a little strange not to have a child living in Oxford, anymore.

I've been more than a little obsessed with Poldark and The Crimson Field, two BBC productions set back-to-back on PBS, Sunday evenings. I haven't missed a single episode of either and didn't realize last night's episode of The Crimson Field was the finale till it ended without a preview of "next week's episode". Darn. I'm sad to see that end. I'm in the mood to binge-watch a series but haven't settled on anything, yet. Sounds like I have no idea what I'm going to do this week, doesn't it? Maybe it's time to de-gloss that chair I bought last week and start painting.

©2015 Nancy Horner. All rights reserved. If you are reading this post at a site other than Bookfoolery  or its RSS feed, you are reading a stolen feed. Email bookfoolery@gmail.com for written permission to reproduce text or photos.
Posted by Bookfool at 1:51 PM