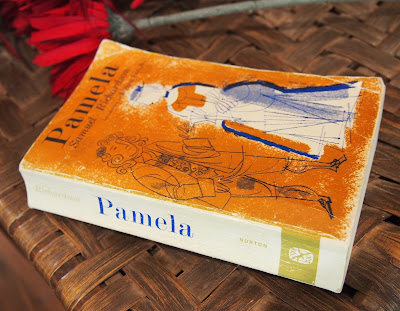 Pamela has a terrible rating at Goodreads (but some pretty humorous reviews) and for good reason. It's difficult to get through, not only because it's extremely repetitive, but also because it's so horrifying to read about how women were treated and believed they should behave. You have to be in the right mood and very, very patient to read the story but it was worth sticking out.

Pamela is only 15 and a startling beauty who works as a maid at a large estate. Her mistress has just recently died and her new master, the deceased lady's son, is a cad. Struck by her beauty, he decides he wants to have his way with her. But Pamela has been taught that she must protect her virtue at all costs. The master is determined and whenever he can get her alone, he molests her but is unable to get very far. Pamela is so frightened that she enlists the help of some of the other servants and decides she must return home to her parents. The housekeeper kindly shares Pamela's bed to protect her (although even she says the master can't help himself and it's clearly Pamela's fault he can't control his impulses because she's so pretty), another tries to smuggle letters to her parents when the master finds out about her prolific writing and insists on reading everything she writes.

After pretending to dismiss her to return to her parents, Pamela's new master instead sweeps her off to another of his homes, where he continues to try to take advantage of her. Here, the housekeeper is not so kind. Pamela continues to write letters to her parents, tries to get the local curate to help her escape, prays that her purity will survive and -- if not -- better to die a virgin than have her purity destroyed. Truly, it's a soap opera and a bit tedious, at that, but I found Pamela fascinating for its perspective on the time period. How far we've come! In the end, the author describes each character's actions as a lesson in morality. Meekness, purity, obedience to the menfolk and generosity are among what was expected of women. Poor Pamela was also frequently lectured on what was expected of her after marriage, including the importance of continuing to dress nicely for the entire marriage lest her husband's eyes stray.

Today we'd call the lord of the house an ass. He admits to Pamela that he was a spoiled man, accustomed to having his way and only softened and convinced that marriage was worth considering by Pamela's continued refusal to give in to him, her piety, her simpering obedience (argh, painful to read) and kindness to all. Of course, the modern reader may find herself, as I did, talking to the book. I kept telling Pamela she was crazy, for one thing, because she waffled about everything. No, of course you shouldn't convince yourself you've fallen in love with a guy who held you captive and molested you, stupid girl, I told the book. She married him, anyway. You can't call Pamela the sharpest knife in the drawer.

Wordy and monotonous as Pamela could be, it was entertaining. It's also memorable. Even when I set the book aside for several weeks, I was able to return to it as if I'd only set it down the day before.

Recommended to a limited audience - I'd particularly recommend Pamela to those who enjoy classics and especially during a time when you're in a tolerant mood, looking for a bigger novel that you can enjoy for the sake of observation about the time period. Pamela is an epistolary novel. Apart from the moral lessons at the end, the book consists entirely of letters written by Pamela to her parents. Here's how Richardson set off the moral section at the end:

The reader will here indulge us in a few brief observations, which naturally result from the story and characters; and which will serve as so many applications of its most material incidents to the minds of YOUTH of BOTH SEXES.

Among my favorite bits from that section:

From the same good example, let children see what a blessing awaits their duty to their parents, though ever so low in the world; and that the only disgrace is to be dishonest; but none at all to be poor.

When I looked up the original publication date during the reading, I came across a blog where Pamela was described as "The Twilight of its time." Unfortunately, I didn't bookmark the site but I found it fascinating that the book was so popular that there was Pamela merchandise. Who'd have thought that kind of marketing went back so far in time? Fascinating.

©2015 Nancy Horner. All rights reserved. If you are reading this post at a site other than Bookfoolery  or its RSS feed, you are reading a stolen feed. Email bookfoolery@gmail.com for written permission to reproduce text or photos.
Posted by Bookfool at 12:42 PM

Email ThisBlogThis!Share to TwitterShare to FacebookShare to Pinterest
Labels: recommended to a limited audience, Samuel Richardson, W.W.Norton and Co.