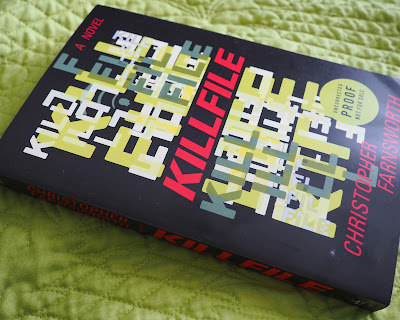 I just finished Killfile by Christopher Farnsworth a couple hours ago and it was such fun that I want to write about it right now. Well, that's helpful. I haven't much felt like writing, lately.

Killfile is about a man who goes by the name John Smith (I was never entirely certain whether or not that was his real name). John is a telepath and former military. He now sells his ability to read minds as a service to wealthy people who want to get inside the heads of others. Everett Sloan believes his former employee, Eli Preston, stole the algorithm upon which he built a successful data mining business called OmniVore. He wants the algorithm extracted from Preston's head and erased. This is something Smith can do, but it's not easy. As the book opens, you're treated to an example of Smith's abilities and the way his use of his natural talent can rebound on him. In short, when he hurts someone, he feels their pain and it takes time to recover.

Normally, he might be hesitant to try to erase information from someone's mind because it's something Smith has only done once and it was not a pleasant experience; neither is planting bad images. But, the pay is something he can't refuse: an island home where he can retreat from the noise of nearby people's thoughts. There are other methods for dimming the noise of everyone else's thoughts, but they have consequences.

I've decided the final paragraph of my review might be a tiny bit spoilery, so skip this paragraph if you're wary of potential spoilers.

John meets up with a woman named Kelsey Foster, who goes along to help him pitch a pretend job offer from Sloan to Preston at a gathering of Preston's employees. There, he will probe Preston's mind and earn his pay. But, things go horribly wrong and the two end up being pursued by dangerous killers. It gets worse when they try to contact Sloan, are completely cut off for not finishing the job, then Preston uses his data mining abilities to take away everything they own and track their every move. Will Preston's hitmen catch them or will Smith be able to find a way to save them both and finish the job?

Highly recommended - A fast-paced thriller with a unique hero and a tiny touch of romance, I found that there were times I had to work to suspend disbelief, but once done, I enjoyed the ride. The author's bio says Farnsworth is a screenwriter. I'm not surprised. The dialogue and scenes have a cinematic feel. It was easy to imagine the story on a big screen. There is quite a bit of violence, including torture, the kind of scene I often skim to get done with. But, I gave Killfile a high rating because I enjoyed the uniqueness and the fast pace - and it does have some light-hearted moments. I particularly appreciated the fast pace after reading a book that I found a bit of a slog for book group discussion, last week (more on that, later).


©2016 Nancy Horner. All rights reserved. If you are reading this post at a site other than Bookfoolery  or its RSS feed, you are reading a stolen feed. Email bookfoolery@gmail.com for written permission to reproduce text or photos.
Posted by Bookfool at 5:15 PM