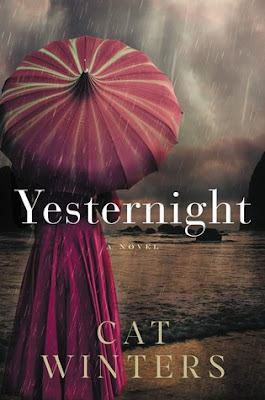 It's been a few weeks since I read Yesternight, but I still remember it surprisingly well - always a recommendation, in and of itself.

Alice Lind is a psychologist who travels around Oregon, testing students to discover any particular difficulties that teachers may need to focus upon. When she travels to Gordon Bay, Oregon, she's asked to pay special attention to 7-year-old Janie O'Daire. Janie is a mathematical genius with an unusual claim: she lived a previous life as a woman named Violet Sunday. Janie claims she lived in Kansas and drowned at 19.

Alice knows that she's overstepping her job description as she digs into Janie's life and searches for information on Violet Sunday, but she has her own strange connections to the past and finds the case too fascinating to ignore. Was there really a Violet Sunday? If so, is it possible that Violet was murdered? Is there a connection between Violet and the dreams Alice has had of a place called "Yesternight"?

I wrote a spoilery review of Yesternight at Goodreads, immediately after finishing the book, but I don't want to post spoilers, here, so I'll try to keep this as generic as possible. What I particularly loved about Yesternight was the fact that it was intriguing enough to keep the pages flying. I wanted to know the truth about Janie and her past life, whether it was true or not and I liked the fact that the book was so atmospheric. I also thought it was well written and paced.

What I disliked was the way modern language occasionally slipped into the book, particularly in the form of swearing. The swearing jumped out at me because I'm old enough to have observed that swear words seem to change rapidly - particularly what's considered publicly acceptable - and the heroine often used words that were considered taboo not that long ago, when I was in junior high or high school. I found it difficult to imagine someone uttering those words in the 1920s. I also found Alice sometimes fell on the "too stupid to live" side. She is described as a woman with little control over her sexual urges. Her sexuality leads to some interesting plot points but I wanted to knock her on the head for being such a moron, a time or two. And, finally, I thought the final (shorter) two sections detracted from the book, as a whole, when Janie's story ends and the book continues with Alice's possible connection to Janie's past life.

Recommended - Given the fact that I mentioned more that I disliked than liked about Yesternight, you'd think I wouldn't recommend it, but my complaints were petty by comparison with the overall enjoyment of the book and that's why it's still a recommended read. I liked the way I was pulled into the story and it held on, at least until Janie's story ended. I did have trouble with the final sections and I initially rated the book 3.5/5 because of that. But, then I went back and altered my score to 4/5 because I kept thinking about the story, which is based upon a news report about a little boy who was able to describe his past life in some detail. In other words, I found the book gripping and unique enough that its flaws are worth overlooking.

©2017 Nancy Horner. All rights reserved. If you are reading this post at a site other than Bookfoolery  or its RSS feed, you are reading a stolen feed. Email bookfoolery@gmail.com for written permission to reproduce text or photos.
Posted by Bookfool at 2:45 PM