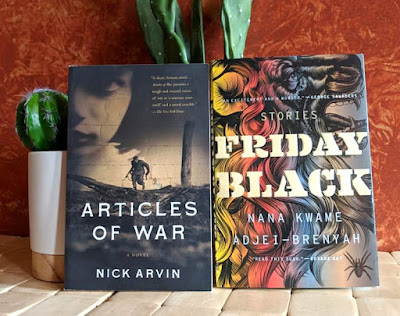 
Articles of War is one of the books I bought for my Perfect Little Books challenge for 2019 (it's going to be very, very hard keeping my mitts off that one) and Friday Black is a book of short stories that I bought partly because a friend highly recommended it, partly because George Saunders called it "An excitement and a wonder," and also because the timing was right. I recently finished a book of short stories and have been thinking I'd like to read another short story collection.


I didn't finish anything at all, last week, because I was going through a post-vacation slump. Fortunately, that finally ended about 2 or 3 days ago and I'm really enjoying my current reads.


And, I still have a bookmark in the WWII book but I just read a chapter or two when I'm not in the mood for fiction so that one may be in the "currently reading" column for a few more weeks, even though it's not a long or challenging read. Cupidity and Unsheltered are both great for entirely different reasons.

Cupidity is about a young woman who has to support her autistic brother. She and her brother have lived with Uncle E since their parents died. Uncle E makes whirligigs (the cupids are popular) when he's not drinking and spending money on ridiculous schemes. Tammy Louise works several jobs, her main job as a waitress at Two Spoons Cafe, which has the most hilarious requirement that you must accept the soup of the day, no matter how much you don't want it. I really want to try flapjack onion soup. Tammy Louise has fallen for a Nigerian email scam. It'll be interesting to see how that turns out.

Unsheltered is about a family that is a bit of a shambles, as is their home. They've experienced all sorts of loss and a serious downgrade in income, so they've moved into an inherited home. There's a second, historical storyline that takes place in the 19th century, when the house was still fairly new. The original owners were forced to vacate the house and decamp to Boston after the father of the household died and they could no longer afford to live in it. But, then the eldest daughter married and they've returned with her new husband. Unfortunately, the house was badly built in the first place. I have no idea where this storyline is headed but they're both engrossing, so far. Usually, I favor one storyline or the other in a contemporary/historical dual storyline book but I don't have a preference, at this point. Barbara Kingsolver's writing just blows me away.


So, neither a good reading week or a big posting week. I had trouble sleeping, post-vacation, in addition to the reading slump.

I watched about 3 or 4 Hallmark movies, last week. This one was my favorite: 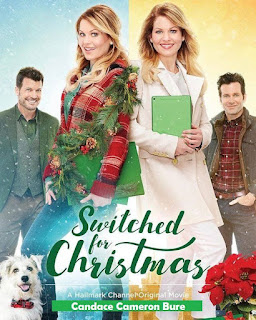 Candace Cameron Bure plays twins who decide to switch places for the holiday season in Switched for Christmas. One is a single mother of two who teaches and is supposed to plan the school's Christmas festival. The other must plan her office Christmas party.

I thought Candace Cameron Bure was wonderful in both roles -- surprisingly convincing. Husband watched this one with me and I kept him going by saying things like, "I'm so glad you're enjoying this movie!" during commercials and "Oh, oh, oh, here comes the dark moment," or whatever, during. He's not a fan of light romance, but he stuck around. The next movie we watched was frankly awful (so Husband walked in and out of the room), but it's the only Hallmark movie I've actively disliked and I watched it anyway. I just like the effortless relaxation that comes with watching a simple love story.

I've also started watching NCIS from the beginning. I've never seen the first two or three seasons and have always wanted to watch the entire series from the start. Kiddo was streaming an episode and said something about "Kate", whom I've never heard of. He said, "You don't know Kate?" I mentioned that I haven't seen it from the beginning and he went back to the first episode immediately. I've contined watching it without him and got through about 4 episodes, last week. I guess TV replaces evening reading when I'm slumpish.


©2018 Nancy Horner. All rights reserved. If you are reading this post at a site other than Bookfoolery or its RSS feed, you are reading a stolen feed. Email bookfoolery@gmail.com for written permission to reproduce text or photos.
Posted by Bookfool at 2:26 PM