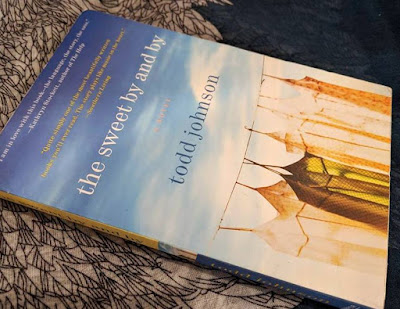 
Only one book finished but Cupidity was a good one (5 stars for totally sweeping me away). I made the irrational assumption that "cupidity" was a coined word because one of the main characters makes little cupid whirligigs and there's a tremendous amount of stupidity going around in the story, although eventually people start trying to talk some sense into Tammy Louise when she keeps sending money to a man who claims she's inherited $5 million and needs to keep sending fees for this, that, and the other thing. But, "cupidity" is an actual word that means greed. New vocabulary word! Woot! There's a bit of a Deus ex machina ending but . . . personal opinion? Sometimes that's okay. It makes the ending surprising, although similar to what I guessed was going to happen (there's a bit of late foreshadowing, but not in a way that ruins it).


I'm enjoying Unsheltered and a little over halfway through it, now. I didn't read any of the WWII book at all, this week, so I don't feel like listing it and I'm considering starting it from the beginning, again, even though I don't need to -- just to read it from beginning to end instead of continuing it in interrupted fashion. I've frustrated myself by setting it aside for too long. I also read a single chapter of a romance: A Duke Changes Everything by Christy Carlyle. The first chapter introduces readers to Nicholas Lyon, a duke whose father suspected his wife of fooling around and apparently had little to do with him. Nick runs a gambling den and is described as a cruel, heartless jerk. I suppose a lovely lady is going to come along and reform him.


I let Thanksgiving get in the way of blog posting, last week. Although Kiddo was home, off and on, it was just the two of us at home for Thanksgiving dinner and we spent a couple days cleaning and doing a little of our Christmas decorating so I didn't go anywhere near the computer, although I occasionally sat down to peruse social media via the phone. We had a pleasant holiday. I prefer big, noisy family gatherings but I have to accept that they're not going to happen, at least for a while. Eldest and Daughter-in-Law have a new baby so traveling was out for them. Maybe someday. We resumed our old tradition of decorating for Christmas immediately after Thanksgiving, which I've missed. I think we've been out-of-town on Thanksgiving for at least 3 or 4 years, now, and I really was happy to return to an old tradition that we've had to set aside. 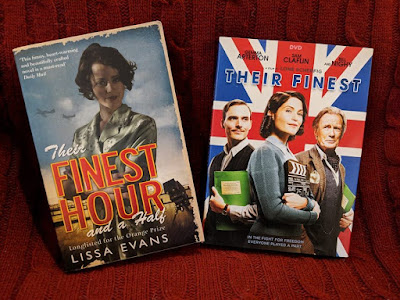 Apart from the usual Hallmark movies (2 or 3 of them, I think), the only movie I watched was Their Finest (DVD at right), which is based on Their Finest Hour and a Half by Lissa Evans -- one of my new favorite authors, as of the past 3 years or so. I have a second-hand copy of the book but haven't gotten to it, yet. The movie was very good and made me eager to read the book. It was not at all what I expected. "That was different," said the spouse. Yes, that's true; it was not told in the Hollywood style at all. The WWII scenes were incredibly vivid and believable (it takes place during the London Blitz), which I always appreciate. Our house came with surround-sound speakers built-in and we usually don't use them because they can be a bit too loud. We turned them on for Their Finest, though, because some of the dialogue was hard to hear. It really made the sound of the bombings intense.

We also watched a couple episodes of NCIS. I mentioned I started that from the beginning, right? I've never viewed the early seasons, so I missed McGee's introduction to the team and always wanted to see how he entered the picture. Youngest recently said, "He's an excellent foil to DiNozzo's character." I think that was apparent from his first episode. And, we watched yesterday's episode of Dr. Who. Sheesh, no wonder I only finished one book. But, it was a good week and I've long since surpassed my annual reading goal (I set it at 100 books in 2018) so I'm just not going to worry about quantity, even though this has been absolutely my worst month for quantity in 2018. I'm always telling other people not to fret about how many books they read but just to try to enjoy their reading, so I'm listening to my own advice.


©2018 Nancy Horner. All rights reserved. If you are reading this post at a site other than Bookfoolery or its RSS feed, you are reading a stolen feed. Email bookfoolery@gmail.com for written permission to reproduce text or photos.
Posted by Bookfool at 1:04 PM