Late in the Day by Tessa Hadley 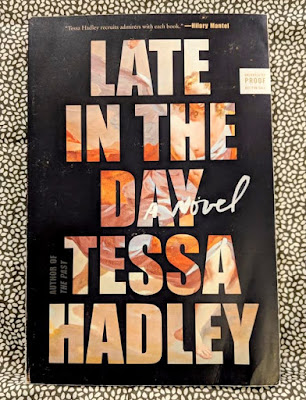 I thoroughly enjoyed Tessa Hadley's last novel, The Past, so I was really excited when I got the opportunity to review Late in the Day. Unfortunately, my second foray into Hadley's writing was not as great as the first.

Late in the Day is the story of two couples who've been friends for many years. When Zachary, the kindest, liveliest of the bunch dies suddenly, all are bereft. His widow, Lydia, moves in with Christine and Alex temporarily and then stays for a surprisingly long time -- well past the funeral. Will she be able to cope on her own? A novel of grief, betrayal, and discovery, Late in the Day is character driven and low on plot as The Past was, but I found it less compelling. I'm going to defer to the cover description for a tiny bit:

Late in the Day explores the complex webs at the center of our most intimate relationships, to expose how, beneath the seemingly dependable arrangements we make for our lives, lie infinite alternate configurations.


I thought that was an interesting way to state something rather bland, which is that there's infidelity in the story. Now that I think back on it, the side storylines do add a bit of interest. I particularly liked Alex and Christine's daughter. But, the vast majority of the characters were unlikable. That's not generally as much of a problem in a novel that's plot driven (at least to me) but when the story is about the characters it's a different matter.

Iffy on recommendation - Much as I like Tessa Hadley's writing (I will definitely read her again), this book was just not for me. It's told as a mix of present-day scenes and flashbacks. The three characters I disliked . . . I didn't even like their younger selves. Christine and Alex perplexed me. What did they see in each other? Alex was a handsome, frustrated poet and perpetual grouch; Christine was an artist but she came off as dead inside. While they appeared affectionate and even well suited, something just seemed off about their relationship. Alex, in particular, appeared to always be unhappy, even when he enjoyed his job and was no longer struggling financially. Lydia was a beautiful slacker who ended up with the average-looking rich guy, around whom the rest of them revolved in some way: Christine as an artist whose work was shown at Zachary's gallery, Lydia as his wife, Alex as his best friend. Lydia and Zachary's relationship was more believable to me than Alex and Christine's; Zachary was the only likable character. 'Twas a pity that he was the one who died.

Having said all that, a few days after I closed the book I felt like I sorta kinda maybe got the point of the story -- that we're not necessarily the people we desire or need to be within a marriage and that a death or betrayal can not only change the dynamics of friendship and marriage but may even open up new possibilities. I've seen a little bit of that in my own life as my mother seemed to flower a bit when she was widowed. She grieved deeply, don't get me wrong. But, my father had a huge personality and my mother always seemed quiet by comparison. It wasn't till after she was widowed that I became aware of my mother's sense of humor, which had been subdued by my father's raucous joy. Maybe something of that nature is what Hadley was trying to show.

My thanks to HarperCollins for the review copy!

Link to my only other read by Hadley:

The Past by Tessa Hadley