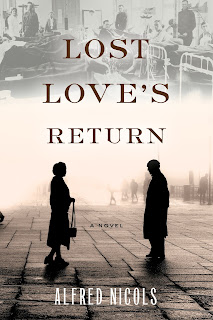 This will just be a quickie review because I don't like to say much about books that I didn't love. Lost Love's Return by Alfred Nicols is a book I bought after a friend begged me to read it (the author is a friend of her family) and then she chose it for our F2F book group's selection. I didn't go to the meeting and have only actually been once since before the pandemic but I read it so I could share my thoughts with her.

Lost Love's Return is about an American soldier named Peter who is injured during WWI. He and a British nurse, Elizabeth, fall in love. But, when he's shipped out without time to tell her he has to leave or give her his address and he realizes he doesn't know how to get in touch with her at all — doesn't even actually know the name of the hospital where she works — they completely lose touch and he ends up in a loveless marriage back home, an ocean away from her.

Decades pass before he's able to track her down with the help of his son. What will Peter find when he finally reunites with the love of his life?

Neither recommended or not recommended - OK, so my personal opinion is that Lost Love's Return brings nothing new to the table. There is no new insight about WWI and the love story is both predictable and one that's been done, before. Having said that, there was a point that I found myself enjoying the story and it has high ratings at Goodreads. So, I wouldn't tell anyone not to read it. There's a sweetness to the romantic storyline; it's just nothing new or special, in my humble opinion. Also, I was a little frustrated by the fact that all of the men who were main characters were tall, strong, blond, and handsome but most of the women were either unattractive or highly self-critical, except for Elizabeth. And, the men kept getting women pregnant. It was just a little trite in that way and felt like a total guy book, to me. I also thought there were a few problems with the British English but that's not necessarily something that will jump out at everyone. I opted not to rate the book at Goodreads but now that I've had time to let it marinate, I'd say it's . . . average? Not horrible, not great, just OK.