All three of these books are from the same middle grade series but the Spy School series has been going on for quite some time and there are at least 7 books, now. So, this doesn't cover all of them, by any means. 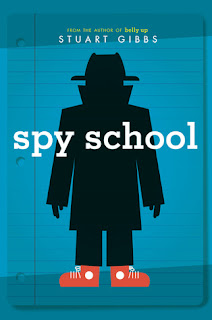 In Spy School (Spy School #1) by Stuart Gibbs, Ben Ripley is an ordinary kid with above average math skills and his dream is to be in the CIA one day. But, he's not exactly CIA material. He can barely get through the school day without something going wrong.

When Ben is told that he's being given a scholarship to a special school for science and math nerds, his parents are particularly excited. But, when it turns out that he's actually moved into a school for future CIA agents, it's Ben that's thrilled. Until he finds out that his acceptance was a case of mistaken identity.

From his introduction to spy school to fighting the bad guys (known as SPYDER) toward the end of the book, Spy School is an action-packed, humorous, and hopefully-romantic ride. I particularly loved the side characters who are written in the James Bond vein: a grandfather, his son, and his granddaughter — a family that goes all the way back to the start of America's spy network by Nathan Hale, their ancestor. Ben develops a terrible crush on Erica Hale, who has been training to be a spy her entire life

Will Ben get a really attractive girlfriend and a place in the CIA? Will his opportunity to become a genuine spy evaporate when he scores badly in self defense? Are extreme math skills enough? What will happen when Ben is faced with a dangerous person from SPYDER, a network of criminals who would like the CIA's spy school to go up in smoke?

I knew I'd made a good decision buying as many from this series as possible when I read Spy School. It is just ridiculously fun. I loved the action, the humor, and the interaction between Ben and Erica, as well as the hilarity of Alexander Hale's attempts to make himself out to be the world's greatest spy (Alexander is Erica's father). 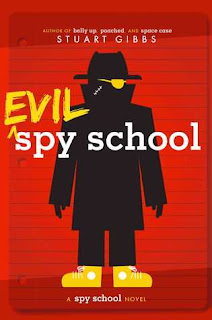 Next up is Spy Camp, but when I bought the 5 books from this series, either I overlooked it or it wasn't available. So, I skipped on to Evil Spy School (Spy School #3). This wasn't a problem. Although there are references to the second book, each of the Spy School books stands alone just fine.

Ben has been kicked out of spy school for accidentally bombing the principal's office, but when he's recruited to join a different group of spies, the bad guys he's already fought twice, he agrees to join their school with the thought that he can learn what they're up to and maybe even stop their nefarious plans.

Evil spy school is not at all like the CIA's spy school. There's a massive gym, for one thing, and there aren't many students. One is extraordinarily perky, which seems odd in a school where the kids know they're working for the bad guys. But, as Ben gets to know his fellow students, he realizes he's there for a reason. He was set up and now he has no choice but to determine what the bad guys are up to before it's too late. And, by too late, I mean Really Big Bombs raining down. Will Ben be able to figure out the evil plan in time to save the day?

Once again, nonstop fun. I love the rollercoaster plotting of the Spy School series and where the author took Ben's maybe-relationship with Erica (well . . . friendship) in Evil Spy School and the bang-up ending (lots of running and explosions and funny moments). 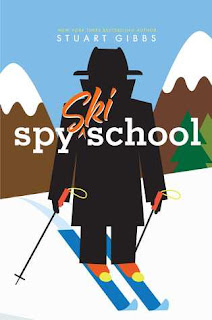 Spy Ski School (Spy School #4) takes Ben, Erica, some of his friends from school, Alexander Hale, and the grandfather (I can't remember his name) to Colorado, where Ben has been tasked with getting to know Jessica Shang, the daughter of an extraordinarily wealthy Chinese businessman. The CIA suspects that he's up to no good, but they really don't know. They don't even exactly know how he became wealthy but he's rented an entire hotel for himself and Jessica while they're in town so Jessica can take skiing lessons. At the hotel and even around Jessica, security is very tight.

Ben doesn't know how to ski and neither does Jessica, so he's the perfect person to hang out with her on the bunny slopes. But, a complication arises when Ben's best friend arrives on the ski slopes and risks the entire mission by getting in the way of Ben and Jessica's potential friendship.

Will Ben be able to get close to Jessica so that he can figure out what her father is up to? Has Ben's best friend figured out that Ben is learning to be a spy? While some of his team also spend time skiing, a few dig for answers on computers set up at the hotel. Is Jessica's father really helicopter skiing? Or is he meeting with dangerous people? If he's doing something dangerous, can he be stopped?

All highly recommended - OK, yes, they're very goofy books. I like humor and action combined, so the Spy School series is perfect for a middle-grade-loving adult like me and makes me wish my kids were younger so I could foist the series on them and watch their faces light up. Both of my sons would have loved this series during their elementary years, especially my younger son. I highly recommend all three and I'm looking forward to reading the remaining two on my stacks. I think they'd be particularly great for reluctant readers who like a good laugh. Both of my sons went through a phase during which they were disinterested in reading and I lured them back by finding books that fit their personal interests. Both were fans of action and adventure and loved a good belly laugh. It's hard for me to imagine a child not enjoying this series, to be honest.