We Need New Names by NoViolet Bulawayo and an F2F Report 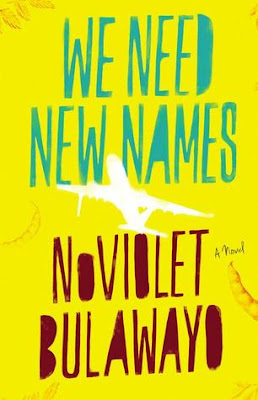 What We Need New Names is about:

Darling is a 10-year-old child living in poverty in Zimbabwe.  She used to live in a nice home rather than a tin shack and had 2 parents rather than one struggling mother and an AWOL father. She used to go to school before things went horribly wrong in her country.

Now, Darling and her friends spend their days roaming around, searching for food to steal and playing games.  Darling's aunt in America says she'll come for Darling, one day, and eventually she does.  But, when Darling arrives in America, she finds that life is different -- better in some ways, yes, but she misses her home and her friends.  And life in America is far from perfect.

We Need New Names is a very difficult read because of the horrors Darling and her friends observe and experience.  Through her eyes, you see rape, starvation, murder, political upheaval, an angry mob, the horror of AIDS and other injustices so common the children are inured to them to the point of turning the evils they witness into games.  There are humorous moments, but they're rare. The following quotation describes Darling's thoughts as she and her friends are getting ready to play "the country game":

If I'm lucky, like today, I get to be the U.S.A, which is a country-country; who doesn't know that the U.S.A. is the big baboon of the world?  I feel like it's my country now because my aunt Fostalina lives there, in Destroyedmichygen.  Once her things are in order she'll come and get me and I will go and live there also.

~ p. 49 of Advance Reader Copy, We Need New Names (some changes may have been made to the final published edition)

What I liked about We Need New Names:

I felt transported to a different world while I was reading from Darling's perspective.  It's hard for some of us to imagine what it's like to be so hungry that you'll gorge on stolen fruit with the knowledge that you'll pay for the theft with equally painful constipation, but during the months that guavas are growing the children in We Need New Names spend a lot of their time climbing trees in the nicer part of town, stealing the guavas and suffering the consequences. Otherwise they'll starve until the humanitarian aid trucks arrive (and what little food those trucks carry doesn't last long).

While my Face to Face book group members and I agreed that We Need New Names had its flaws, it was certainly a learning experience reading about life in Zimbabwe.  And, it's always interesting to read about what it's like for a person entering the U.S. from elsewhere -- the culture shock and the disappointments of moving to a land that one has visualized as practically utopian.

What I disliked about We Need New Names:

This seemed to be a group consensus, although we didn't have a show of hands: Sometimes it seemed more like an adult was writing through a child's viewpoint than a true child's perspective because Darling knew too much.  Granted, a 10-year-old can be brilliant and very wise, but if you take the country game as an example, it shows a striking knowledge of geography and politics.  And, sometimes Darling seems a bit too wise for her age:

Gradually, the children gave up and ceased asking questions and just appeared empty, almost, like their childhood had fled and left only the bones of its shadow behind.

The occasional simile or metaphor that sounded rather adult threw me out of the novel, but only briefly.  My biggest complaint would have to be the fact that I had difficulty getting into the book in the first place.  It did not grab me and suck me in until around page 75.  Because the description of the book reveals that Darling ends up going to America, I was also a little dismayed that her move didn't occur till the middle of the book.  I expected the story to be more about the culture shock and adjustment than her life in Zimbabwe.

I wouldn't call Darling's delayed arrival in America a bad thing, though; it was just unexpected. I actually thought the 150 pages of life in Zimbabwe were the best.  Once Darling arrives in Michigan, she is surprised to find herself longing for her home and even having a bit of difficulty appreciating her comparative prosperity.

Here is where we dive into the group's thoughts:

Although We Need New Names generated such a noisy discussion that our group leader finally gave up and passed out a feather (only the person holding the feather is supposed to speak) to get things under control, it was a rather ragged and unfocused discussion, which is probably my fault.  I didn't think to seek out discussion questions and since I was the person who provided the books, I was expected to have done so.  My mistake. On the plus side, everyone had something to say and, in fact, there were a couple topics I thought about in advance but didn't get around to mentioning.

One thing about We Need New Names that really frustrated the members of my group was the fact that Darling was never really happy in America.  Once she arrived, she discovered America has its own problems with racism. She wasn't poor but she wasn't wealthy, either, and sometimes she could hear gunfire in the streets. The reality of America didn't match up with the America of her imagination, in other words.  But, was she merely disappointed with a less-than-perfect new home and frustrated with being an outcast or did she manage to blend in just enough to become a sulky teenager who was more American than she realized? In the latter part of the book it became apparent that, at least for Darling, immigration meant a life between two worlds, neither of which were comfortable.

Other things we discussed:
A few topics that didn't come up but which are worth discussing:

Recommended - An excellent group read but very gritty with harsh language, violence and frightening situations. Nobody at all said, "I didn't like this book" or "I just didn't get the point," and the group discussion was enthusiastic to the point that it degenerated and became kind of a chaotic noisy mess.  Even the feather didn't entirely do the trick when it came to calming the group down.  I think we all agreed that it was clear the author is a fairly new writer and the book could have been a bit more polished but everyone got something out of it and when our group becomes that noisy, it means there is more than enough to talk about.

I liked the author's use of similes:

Dumi's deep voice is a little rugged, like it walked all the way to America and is now worn out from the effort.  [. . . ]

She smiles, and I stare at her because of the way she smiles.  Like she is hearing music and she is dancing to it on the inside.

On a personal note:

The day I finished reading We Need New Names, I was in our former town running errands so I met my husband for lunch in a nice restaurant.  As we were sitting there with our bread and fancy butter in a puddle of sugary goo that neither of us ate much of because we were in the mood for a light meal, I found myself wishing there was some way to gather all that excess fresh food that we waste. I imagined a giant air tube sucking food from our Land of Plenty to wherever it's needed.  We Need New Names is definitely the kind of book that makes you look around and reassess the quantity of possessions you have and the food you don't eat -- things that could be useful to someone else.