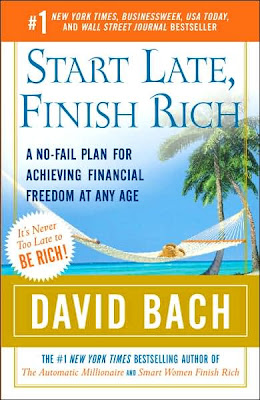 I'm not quite sure whether to recommend this book or not. It starts out with a similar tack to Dave Ramsey's approach - take a long hard look at everything you spend your money on to discover where your "latte money" is going. By "latte money" the author means little, niggling daily wastes of money that you can easily eliminate and turn into savings. Instead of buying a daily coffee at an expensive coffee house, for example, assume you can save $5 a day and invest $150 per month. You'll pile up money faster if you turn senseless spending into investments. Makes sense.

Then, the author sort of loses his mind and tries to take you with him, in my personal opinion. Without naming names, he gives Ramsey a good-sized hand slap by claiming others will try to mislead you into getting out of debt before saving. Well, of course they will; debt is the biggest money-gobbler of them all. Bach, however, says that you should start saving at the same time you're paying down your debt because you'll have more set aside in the long run, banking on the time value of money. He then does some bizarre math that totally overlooks the fact that it would be almost impossible to save beyond what you'll lose to banks or credit card companies during the time you put off paying off loans or credit card balances. I strongly disagree with this particular concept. While I'm not in debt, apart from a mortgage, it makes no sense to me from a purely mathematical viewpoint.

The investment portion of Bach's book has some excellent advice and here, I must say, I think he excels over other get-rich-quick authors. He gives you specific websites to look at and advises that your life should be exciting, your investments boring. Bach claims the best way to split your investments is into thirds and he gives plenty of information on where to go in order to get started, how to choose mutual funds and IRAs, how much you can put away tax-free or tax-deferred and which alternatives are best for your income level. If there's a portion of this book that I think makes it worth the money, it's the section on how to invest. The only part of this section that I was uncomfortable with was his advice to put 1/3 of your investments in real estate funds, which he claims are safer and more profitable than mutuals. The URLs he listed all appear to be aligned to the same company. That alone is suspect, in my mind, but it's worth looking into.

Onward to how to start your own business so that you can make more money, thus allowing you to sock away more. He describes direct selling as an excellent opportunity, claims that the statistics on new businesses that fail are wrong, and suggests a variety of options including selling goods on eBay. Okay, I'm fine with that. What I'm not okay with is the suggestion that most people make a large amount of money in home-based direct sales. This has not been my personal experience, nor that of anyone I know who has attempted a home-based, direct sales business (the kind where the company sells forms to you and you sell via parties, cold calling, etc.). I may not know the right people, but it's true that I've seen a lot of people invest several thousand dollars and fail to make a profit at all. He does list five major downsides to direct selling and this is where I thought one of the quotes was most humorous:

You can have the good life, if you're willing to work for it. But, anyone who uses this approach to sell you on the business is, in my opinion, trying to "razzle-dazzle" you, and they and their business should be avoided.

I marked that quote because my personal opinion is that his entire approach is just what he describes in that comment. Loads of exclamation points!!! Hinky math!! You, too can get rich and build an ego as big as his!!! Oh, please. It takes a lot of guts, some connections, a huge amount of savvy and a willingness to profit off the misery of others in order to make money in the ways he suggests, particularly in the following portion of the book.

Next is a large section on how to make piles of money in real estate. The bizarre aspect to this section is that what he suggests you do is not only horribly risky but also, in many ways, immoral. The math gets even more bizarre, at this point, as the author has apparently only lived in places where mortgages and rents are huge, the opportunities immense, the rising cost-of-living so rapid that it's actually possible to buy a home and two years later make a large profit. He recommends leveraging (buying properties with other people's money), tying up real estate long enough to find an additional buyer and then "flipping" it to make a profit, taking out a second mortgage on your home to buy additional property. The headaches of becoming a landlord are only marginally addressed. Not to mention that leveraging is exactly what caused Dave Ramsey to go bankrupt and come up with his own financial recovery system. Yes, in the long run real estate is only going to continue to rise. But, if the real estate market collapses or a deal goes bad, you stand to lose absolutely everything you own.

But, wait! Hasn't he forgotten that he's referring to someone else's money? What about interest? Regardless of interest rate, there is going to be a payoff amount for borrowed money that includes some sort of profit for the lender. Hinky.

The fact of the matter is that everything Bach suggests, which is reasonable and useful, can be discovered through a little personal research. How do you invest safely in mutual funds? Look up Morningstar's ratings online or in newspapers and ask for a prospectus from any company you're considering placing your money with. What about the confusing job of figuring out the best avenues to avoid being heavily taxed on your investments and retirement funds? Again, information is readily available. For those who are nervous about looking such things up without a financial expert to help translate, there are always investment companies. They'll charge you a percentage, but it might be worth the cost in order to get a little help. The book may or may not help you feel more confident; I think that depends heavily on the individual. As a reference guide for websites on investing, the book is excellent - bearing in mind that things do change rapidly on the internet and a good portion of what he recommends can be discovered on your own, particularly information from the government.

Oh, and this is only a book that is of any value if you're a resident of the United States.

I have to admit that I finally decided I needed to just get the reading of this book over and done with. The author's ego trip was immensely tiresome, his stories of how he advised friends into wealth annoying and his last-ditch attempt to sound moral by throwing in a tiny section on "giving back" appalling.

In general, there is some good, solid information in this book and a great deal of what I consider nonsense. I don't doubt there are people who've become wealthy using these principles; in fact, I know some who have made loads of money by becoming landlords or buying properties and "selling up". But, it's not a "no-fail plan" as the subtitle suggests. Of that, I'm certain. Upon consideration, I can only recommend certain portions of the book and for that reason I'm going to leave it off my recommended list entirely. In fact, I found it so frustrating and the math so misleading that I'm not even going to rate the book. Instead, I'd advise anyone who is interested to flip through, decide whether the information on investments is worth the price of the book, and make your own decision. I question the author's integrity, but I'm also far from wealthy and hesitant about real estate. Of the investments my savvy and careful accountant father had upon his death, exactly 25% returned pennies on the dollar. Guess what that 25% was invested in? Yep, real estate that went bust. Okay, I'm a little biased.

Not recommended, although I'd advise flipping through the book for starting points to do your own investment research, if you feel like you don't know where to begin.

And, for a little levity because this was a highly negative post, I give you Red Beans and Rice: It's what's for dinner . . . and breakfast, and lunch. 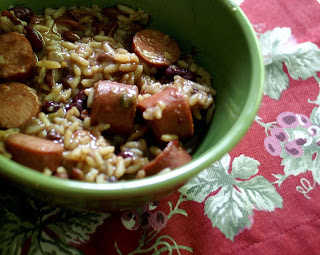 This is what happens when you change your email address and forget to open a statement from the local swim club during the month they're having a fundraiser. Oopsy, we were supposed to sell 10 red beans and rice dinners but I didn't open the envelope with the tickets billed to our account until it was too late. So, shoot, might as well just throw 10 dinners' worth in a plastic container and eat it ourselves, right? I'd never heard of red beans and rice before moving to Mississippi and I have to admit I was skeptical when I first tried it, many moons ago, but it's delicious so I didn't mind being cornered into buying 10 dinners. I may get a little tired of eating the same meal repeatedly, soon, though.

Happy Weekend!
Posted by Bookfool at 11:54 AM