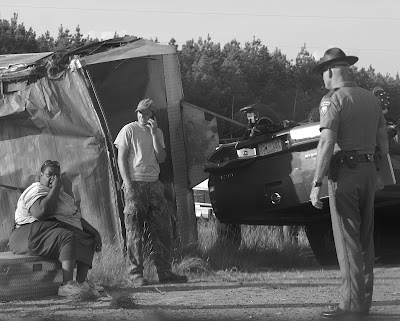 Not that we've gotten any terrific news; I just liked the thought (in my subject line). I am awaiting news from my mother, who had surgery and was told that the mass removed "looked like cancer". But, we won't know till Wednesday. Medical people are so cruel. However, they've saved her life three times, so I guess I'll give them a break.

What do you think of the highway patrolman's posture? Excellent, eh? It makes me want to walk around balancing books on my head to improve my posture. That's an old photo, by the way (as in about 8 months old), taken as we were returning from a band contest in Copiah, Mississippi. We were warned that there was a "serious accident" holding up traffic and deliberately altered our course. But, the road we chose just happened to feed right back onto the highway we were trying to avoid. Hence, the opportunity to photograph a highway patrolman with excellent posture, as well as a heck of an automobile mess. 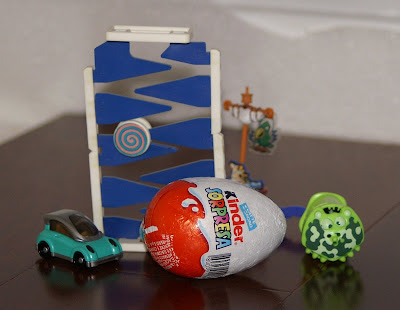 Pictured are a few of my favorite toy surprises. We're always fond of the little cars. The green alien-looking thing, at right, is a top - and a very good one. The blue toy - rather like a marble run - is my all-time favorite. Behind it is a pirate ship. Unfortunately, I dropped one of its tiny plastic parrots on the way down the hallway to photograph it and haven't seen it, since. Oh, well. It was nice while it lasted.

The Pearl Diver was one of my bargain finds. From the appearance of the cover and the blurb on the back of the book, as well as its size, I was under the impression that I was buying literature with a touch of mystery. Nope, it's a mystery - the kind I'd have expected to buy as a mass-market paperback rather than trade paperback (which I do like better, as they're more comfortable to hold). But, anyway, I enjoyed it. It's no great work of literature, by any means, but the mystery is a good one. It appears to be the 7th of 8 mysteries, but stands alone well. Full review later, if I can summon the energy.

I'm about to lose my mind over the migraine medicine fiasco. As I suspected, my primary physician won't slot me in for a 5-minute medicine appointment because he's getting ready to leave town and I'm undoubtedly being punished for missing my appointment. Bastard. I didn't say that. So, I called to see if they have a new neurologist at the other clinic (owned by the big, nasty medical corporation, where they happily take your money and grudgingly credit your account six months later). We currently do not have a neurologist in Vicksburg at all. Not one. Calgon, take me away. Okay, so the clinic gave me the number of my old neurologist - now on the Gulf Coast. And, of course, he can't call in refills because you have to visit him (plus, he doesn't have my records). Can I just say, "Aaaaaaaaaaargh!" Okay, thanks. I feel better, now, although my head doesn't.

Click on this to enlarge and view the funniest little insert that ever dropped out of an album:

So much for sticking to books only.

Apologies for the static sidebar. I'll try to get that updated, later, so it no longer appears that I'm reading the same books over and over and over.

End Tuesday Twaddle
Posted by Bookfool at 11:08 AM