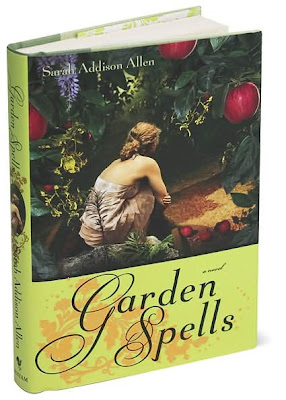 Second: I have to admit that I was so completely swept up in the story of Claire Waverley, her unusual family and their magical tree that I completely neglected to mark a single quote. But, I knew I was going to love Garden Spells from the first paragraph. So, I'll just quote the first paragraph. Please bear in mind that my copy is an advanced reader and the final copy could conceivably be different. But, I can't imagine why anyone would mess with it, so here you go:

Every smiley moon, without fail, Claire dreamed of her childhood. She always tried to stay awake those nights when the stars winked and the moon was just a cresting sliver smiling provocatively down at the world, the way pretty women on vintage billboards used to smile as they sold cigarettes and limeade. On those nights in the summer, Claire would garden by the light of the solar-powered footpath lamps, weeding and trimming the night bloomers - the moon vine and the angel's trumpet, the night jasmine and the flowering tobacco. These weren't a part of the Waverley legacy of edible flowers, but sleepless as she often was, Claire had added flowers to the garden to give her something to do at night when she was so wound up that frustration singed the edge of her nightgown and she set tiny fires with her fingertips.

I reread that paragraph twice when I first opened the book, I liked it so much. Garden Spells is the story of Claire Waverley. Alone in her large family home in Bascom, North Carolina, Claire runs a successful catering business. She uses herbs and flowers in her unusual recipes, each of which have specific purposes. Violets, for example, are supposed to induce calm, bring on happiness and ensure a good night's sleep.

Claire is a solitary woman and believes herself to be, for the most part, content. Then, her sister returns from a lengthy absence and a new neighbor baffles her with his affection, forcing her life into new directions.

I'm not going to say a great deal about this book because I don't want to ruin it, so I'll make just a few general comments:

1. I thought the story was totally captivating, but a few times I skidded to a halt because of a twisty sentence. In other words, sometimes the author's grammar left something to be desired. Hopefully, those problems have been fixed in the final copy.

2. Because I enjoyed the book so much, I wanted everyone else to love it and went rushing off to read other reviews. A few folks complained that the storyline was far too close to that of Practical Magic, but that seemed to be the only major complaint (apart from one or two who thought the writing was not spectacular). I haven't yet read Practical Magic, but I would have to agree that there's a similar quirkiness to that of the characters in the lone Alice Hoffman book I've read, Turtle Moon. Quirkiness is good; in a book with a Southern setting, it seems particularly fitting to me.

3. Even though I loved the first paragraph of Garden Spells, I admit to thinking that it wasn't as well-written as I'd hoped. And, yet, I loved the characters and their story so much that it didn't matter. There are times that the desire to savor lyrical language can take a backseat to the joy of escaping into a magical setting. That was the case - at least for me - with Garden Spells. I particularly loved the magical apple tree (which has quite a personality all its own) and its role in the denouement of the book. If I felt there was anything at all to complain about, it might be the fact that most of the characters' flaws are very mild. But, I just don't feel like complaining. I liked the book too much.

4. I enjoyed Garden Spells enough that I'll be bouncing in my little computer chair when the author finishes a second book.

Apologies for my absence, this weekend. We were busy watching this nifty bunch of kids swim in the local meet hosted by my son's school: 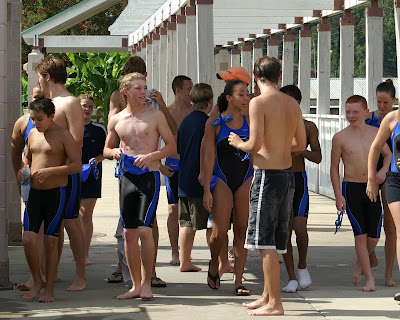 And, then, I suppose the heat exacerbated the migraine I was already fighting, late in the week. Yesterday, I was immobilized by pain. Today, I'm relieved to have yesterday over with. I'll try to catch up on my blog-hopping, tomorrow.

Currently reading: Alas, Babylon by Pat Frank - hope to finish that one by tomorrow

Totally unexpected bonus inside a box with the ravioli-maker attachment hubby ordered:
The Passion of Artemisia by Susan Vreeland, and
A History of Costume by Carl Kohler

Seriously! Someone actually used books as padding for a ravioli-maker attachment box. Can you believe it? The husband's reaction was priceless (and unrepeatable).

Hope everyone had a terrific weekend!
Posted by Bookfool at 6:01 PM