Three books and a couple of wahoos 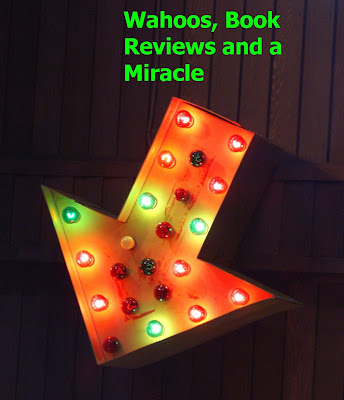 Before I do anything else, I have to tell you the biggest wahoo of the week, thus far, and it's huge (it just happens to also be the miracle referred to, above). It's such an amazing miraculous, totally unexpected phenomenon that, honestly, I think y'all need to get a cup of water, sit down and steel yourselves before I tell you because you might just faint.

Ready? Everyone okay? Here's my huge, gigantic, mind-boggling wahoo: I renewed my driver's license in less than ten minutes. Whoa!!! Can you believe that? I was fully expecting to spend the entire morning with a number in my hand, in a room full of cranky people. I even brought three books to choose from while I waited. Instead, I walked in the door and not one person was seated in the waiting room. I reached for a number and the clerk said, "You can come on back here, ma'am." Is that freaky, or what?

Now, it wasn't a perfect experience. My vision has become better with age and I wanted to have the vision restriction removed; but, the clerk was talking to another clerk the whole time she typed and she ignored that request. Still, everything happened so fast that I was hard pressed to complain. So, wahoo for a miracle at the Driver's License Bureau - quick service!!!

I can't think of any other great wahoos, so I guess I'll throw in one stupid wahoo: Wahoo for butterflies. Told you it was stupid. I've probably also already used that one, but butterflies are absolutely everywhere in Vicksburg, right now, and pretty much the only thing I've been photographing (besides swimmers). 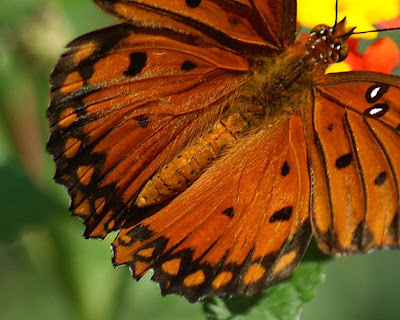 Don't worry, I didn't stick my nose near his wings; that's a cropped photo. And, now, a few brief reviews.

Fifteen-year-old Lizzie was certainly not expecting to die. It happened so fast. Now, she's on a cruise ship in her pajamas and the afterlife is . . . well, weird. Everyone ages backwards. Lizzie ends up living with a grandmother she never met during her real lifetime, and she slowly discovers that you have to use the life you're given, regardless of how long it may be or which direction you end up aging.

Elsewhere is a totally bizarre take on the afterlife. I thought the story was cute and Lizzie was pleasantly snarky without ever becoming annoying. But, the idea of aging backward really bothered me and I thought the author tried a little too hard to prove how clever she was. Still, it's a fun and original read. I enjoyed it and will read more by Zevin.

After Wallis wrote a tale her mother told her as a child (Two Old Women) and it became an international bestseller, she returned to the true story of her childhood. The tale of a native Alaskan childhood, Raising Ourselves tells about the loss of ancestral Gwich'in religion and traditions, the plague of alcoholism among natives and what it was like to grow up an impoverished child in a family with 13 children. A very illuminating memoir that helps to explain why - when white settlers brought their religion and disease to the Yukon - the pain of losing family members, friends and tradition caused the majority of the population to turn to alcohol for comfort. Raising Ourselves is sad, shocking and inspiring; it's amazing that Wallis managed to survive, much less become a bestselling author.

I ordered this book through Paperback Swap and the sender, Lexie, actually paid extra to get the book to me faster because she read my blog and knew I'd just had a birthday. So, enormous thanks and hugs to Lexie!!!

Law-school dropout Abby Knight enjoys running her flower shop, Bloomers, and driving her vintage yellow Corvette. But, when an SUV driver rams her Corvette near the scene of a murder, she decides to hunt down the SUV's owner and find the murderer; she's convinced they're one and the same. The hunky local bar owner, a former cop, helps her out. A mix of police corruption, a powerful politician and a very nasty wife abuser mean danger for Abby at every turn.

Mum's the Word is the first in the Flower Shop Mystery series and my second read for the Cozy Mystery Challenge. I enjoyed it. Kate Collins has a nice, breezy style, which I find better than average (for this particular genre). However, I did think Collins left a couple of things unexplained.

I suppose Raising Ourselves and Elsewhere are books that I read justforthehelluvit.

Now reading: Lottery by Patricia Wood and, of course, Haunted Castles of the World when I feel like it and haven't set it down somewhere I'm not likely to find it.

Hohoho, Merry Wednesday! And, Happy Thursday to those of you who live in the future.

Bookfool with butterflies on the side
Posted by Bookfool at 12:49 PM