A Break with Charity by Ann Rinaldi - RIP #8 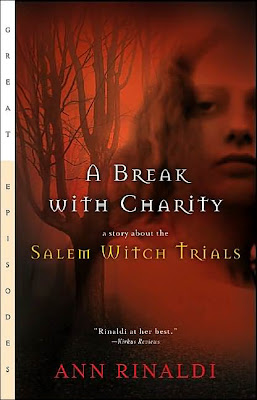 What led you to pick up this book? I was in the mood for a quick read that still qualified for the RIP and A Break with Charity was at the top of my stacks, having just recently arrived.

Summarize the plot but don't give away the ending. Susanna English desires to join the circle of girls meeting at the local parsonage in Salem Village. But, she's considered an outsider, due to her family's wealth and status. When she discovers that the girls are accusing local Salem residents of witchcraft as a game, Susanna determines that she must share what she knows about the circle. But, when one of the girls tells Susanna that her family will be "called out" as witches if she tells the truth, Susanna is frightened. Will she share her knowledge and stop the madness? Or must she remain silent to save the lives of those she loves?

What did you like most about the book? I liked the fact that Susanna and her family were sensible about the witchcraft hysteria - they knew their own minds and planned for the possibility of having to escape. I also liked the way this story was told - from a suitable distance and as a recollection of past events.

What did you think of the main character? I liked Susanna. She was young and impressionable, but she had a good head on her shoulders. Her greatest concern was always her family.

Thoughts about the plot: I couldn't help but compare A Break with Charity to Susannah Morrow, another book about the Salem Witch Trials that I read earlier in the year. Both had their merits, but I became weary of all the God-is-out-to-get-us, the guilt, the preaching and the detailed descriptions of what happened to the accusers (all that twitching and squealing) in Susannah Morrow. I liked the fact that the protagonist was not in the center of the events, but more of an observer in A Break with Charity - it was not enjoyable to me to experience crawling into the head of someone who allowed herself to become deluded (as in Susannah Morrow); and, I also found that A Break with Charity was easier to believe. The author's notes explain why she chose that particular "distant" perspective. While I think there must be a theoretical aspect to any work of fiction pertaining to the witch trials (nobody really knows whether diseased grain caused delusions and fits or the girls made the entire thing up), it certainly seemed like Rinaldi did a thorough research job.

Susanna's thoughts about what it means to be a Puritan:

The Puritan code leaves no room for those who manifest oddities or weaknesses of nature. The Puritan virtues are very plain. They are hard work, cleanliness, orderliness of mind and manner, perseverance, courage, piety, a knowledge of one's sins, a desire for forgiveness, hatred for the Devil and all his works, obedience to the clergy, and impatience with heathens.
Heathens, of course, are Baptists, Quakers, and all other manner of miserable heretics.

Share a favorite scene from the book: I liked the chapter about "four creatures" who helped Susanna offload the charitable donations she hadn't found the time to distribute.

In general: I think I'd rather read a factual account of the Salem Witch Trials than a fictional one. I liked the author's choice to unfold the story in a more distant way, with a character who was not one of those stricken (or pretending to be so) by "visions" and I found the book an interesting, very quick and believable fictional telling of the story. It's truly disturbing and creepy to realize that it's very possible that those little girls were merely playing a game and that people were so stern in their religious beliefs that they took the visions seriously and put to death many innocent people for no reason at all. Anything about the Salem Witch Trials is definitely a great choice for the RIP. It's a horrifying piece of American history, no matter how it's portrayed.

4/5 - Written with good flow, making the book a very quick read. Although the writing is a bit simplistic, I didn't have trouble suspending my disbelief in the fictional aspect. There were times that I thought the author was attempting to use her story to give a history lesson; in other words, it felt a bit forced. But, part of the point of reading historical fiction is to learn about the events, to visualize them as they unfolded. I think the author did a very good job of that and I appreciated her obvious efforts to tell the story with as much historical accuracy as possible.
Posted by Bookfool at 11:23 AM