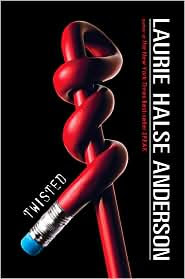 What led you to pick up this book? It was an impulse check-out from the library, spotted on the "new titles" rack.

Summarize the plot but don't give away the ending. Tyler Miller faded into the background at his high school, practically invisible to the other students until he was arrested. After a summer of enforced work to pay the damages of his misdeed, Tyler has grown taller, developed muscles, and is known to everyone. But, when the one girl he's really interested in suddenly notices him, Tyler ends up walking into another disaster. Blamed for yet another crime - this time, not of his doing - even his family doesn't believe he's innocent.

What did you like most about the book? I loved Tyler, the story, and the way the author kept heaping disaster upon disaster on Tyler until things looked hopeless. I loved the way Tyler turned things around. Actually, I liked everything about the book.

What did you think of the main character? I adored him. He was a good person - funny, sometimes tongue-tied, really quite normal and confused but good at heart and unwilling to let anyone convince him that he was as bad as they thought. I liked that strength and how he summoned it in the end.

A scene in which Tyler's sister Hannah is pounding on the door to get him out of bed in time to get on the bus for the first day of school:

It sounded like she was going to punch through the door. All those middle-school girl-power sports had made my little sister a lot stronger than she looked.

"Get up!" Thumpwhumpthumpwhump. "Mom said! I don't want to miss the bus."

It was going to take a week for her to figure out that high school was school, plus seven levels of social hell (especially for freshman girls), with too much homework and rules dreamed up by psychopaths.

Then we'd see who was eager to get out the door.

Share a favorite scene from the book: There was not a single scene I disliked, but I was particularly fond of the scenes toward the end of the book, when Tyler summoned his wits and very firmly told the adults that he was not going to take their abuse anymore.

In general: I'm convinced Laurie Halse Anderson can do no wrong. This is my third book by Anderson. Speak blew me away; it was powerful and intelligently written. Fever 1793 was probably the weakest of the three, but I still found that I learned a great deal about what it must have been like to live through a plague. Twisted was amazing. I thought she did an excellent job of getting into a teenage guy's head, showing his insecurities while giving him a tremendous amount of character. I felt I knew and understood Tyler and I was rooting for him, throughout the reading of the book.

5/5 - Great character, believable conflicts and dialogue, witty, funny, with a great ending.
Posted by Bookfool at 11:16 AM