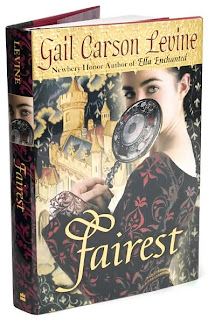 What led you to pick up this book? After reading The Two Princesses of Bamarre by the same author, I was eager to read more of her work.

Summarize the plot but don't give away the ending. Aza has a stunningly beautiful voice and a family who loves her dearly, regardless of how she looks (and the fact that she was adopted after a guest in their inn abandoned her). Aza and is unattractive enough that insults by the patrons are simply a way of life, yet in a land where singing is an integral part of life, her voice is her saving grace. When a duchess and regular customer of the inn is left lacking an attendant due to illness, Aza is asked to step in and accompany the duchess to the king's wedding. While at the castle, Aza's voice and ability to throw it (which Aza calls "illusing") catch the attention of the new queen, who coerces Aza into illusing when the queen must sing, in order to both protect the queen's reputation and disguise her own lack of talent. When the deception is discovered, Aza must run for her life; and, in the process she learns much about herself and how little appearances really count.

What did you like most about the book? I liked the theme about beauty being more than skin deep, the adventurous scenes when Aza had to run and hide from the queen, the fast pace, and the warmth of Aza's adopted family. I also loved the gentle romance between Aza and the prince.

What did you think of the characters? They were, for the most part, distinctively polarized; you were meant to either love them or hate them, as in fairy tales. While I didn't adore Aza in the way I did Meryl and Addie in The Two Princesses of Bamarre, Aza was easy to like and her family was particularly charming. The king was lovely, the prince was kind and the duchess and queen were cringe-inducing.

Share a favorite scene from the book: I can't remember any particular scene, but I really enjoyed the time during which Aza was forced to hide out with gnomes.


Thumbs up, 4/5 - Adventure, love and lies with a touch of romance. Once I became involved with the characters, I had difficulty setting the book down.

In general: An enchanting book with a lovely, positive theme. Not as good as The Two Princesses of Bamarre; but, had I reviewed The Two Princesses, it would have received a 5/5. Not many books are worth a perfect rating, so I definitely think Fairest is worth the time.

I'll do the book drawing, above, at approximately 7pm, Central Time (U.S.). Must go plant flowers while the weather is cooperating.
Posted by Bookfool at 12:43 PM