Things I see on a normal day, and a finished book!!!

I had some fun, this weekend (!!!!). First, I went for a drive in the countryside and took a trip to Woolaroc Museum and Wildlife Refuge on Saturday afternoon. I took loads of photos. Sunday, I was able to get away to my in-laws' house to upload a handful. Yippee! I've separated them so that I can stretch recent photos out for a bit, to make the blog a bit less dull. Today, a few photos of things outside my sister's house. Huge thanks to the in-laws for the food, company and internet time!

Here's one of my favorite photos of my sister's dog, Buddy, giving me the sweet, "Please-please-please walk me or play with me or chase me or anything" look. Buddy is part dachsund and part something . . . not sure what . . . and 100% loveable. Note how he's holding himself as if he can't quite sit all the way down and is poised to leap forward. He's an eager little fellow. 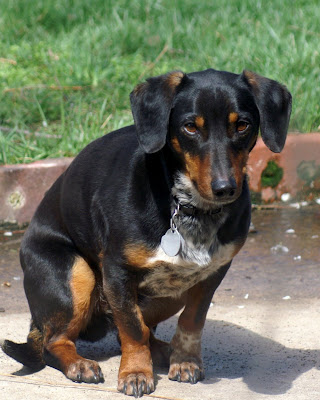 Buddy has been ignoring the squirrels, which I definitely appreciate. Apparently, he does sometimes hunt them, but they're so entertaining that it's a relief to see the pupster ignoring their antics. Squirrels in Bartlesville are very different from our Southern fox squirrels. Here, they have little gray squirrels, which are quite cute. 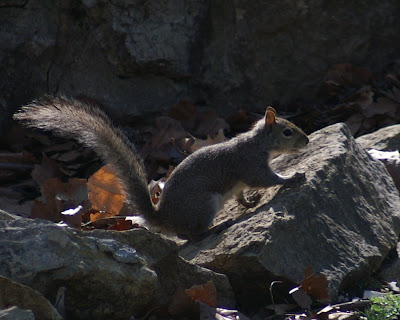 My brother-in-law told me they had a family with three baby squirrels in their yard, last year, and that the babies provided a great deal of entertainment. "They play like kittens," he informed me, "chasing each other and jumping over each other, tussling. Such fun to watch." I felt a little envious. But, even the individual squirrels have been amusing, so there will be a few more squirrel photos in upcoming posts. The photo above looks practically posed, like he's graduating from Squirrel High School, but I liked the lighting, so there you go.

Not far from the driveway is a lovely forsythia bush. This isn't a very good photo, but the backdrop of that dark blue sky against sunny lemon blooms is so pretty. 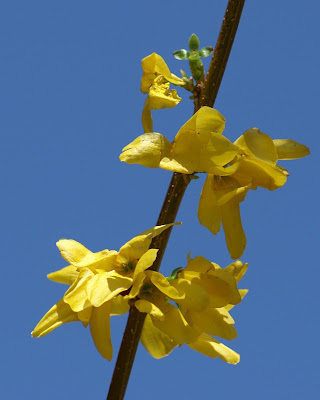 While I've been immersed in caregiving, I've had a bit of trouble with losing track of time. So, pardon the huge delay posting a link to Estella's Revenge. The latest issue has been up for days. I managed to read a few articles and, of course, they were all superb. Is "superb" an uppity word? Anyway, I enjoyed them. Since I took the time to read and went back to fetch a link, Estella has gotten a spiffy new header. Cool.

You can find my review of Pat Barker's Life Class, here. It was not a favorite read, but I did like Barker's voice and plan to read more of her work.

Last night, I finished my first read for the month of April! Wahoo! It's The Olive Season by Carol Drinkwater. The Olive Season is the second of two memoirs by Drinkwater which tell of her experiences on the olive farm in Provence that she and her husband purchased and tend to between film jobs. I was surprised to see that the author's face is familiar. For some reason, I envision her dressed in period clothing from WWII, although I haven't looked up her filmography to find out what films or television shows in which I might have seen her perform. Drinkwater's writing is lovely and welcoming. You feel as if you've been allowed to peek into her charming country life and it's mostly quite uplifting as she has a love of nature and life that truly leaps off the page. The latter half is quite emotional, due to a terrible loss that occurred during the time period covered in this particular memoir, and yet it ends on a positive note.

I'm hoping to finish A Fraction of the Whole, tonight or tomorrow. Also reading:

It Happened in Oklahoma by Robert L. Dorman and

Loose Ends: Short Stories and Poems by Les Combs. The first short story in this book made me smile and was nicely unexpected, so I'm really looking forward to reading the rest.

Hope everyone had a terrific weekend!

Bookfool on the Prairie