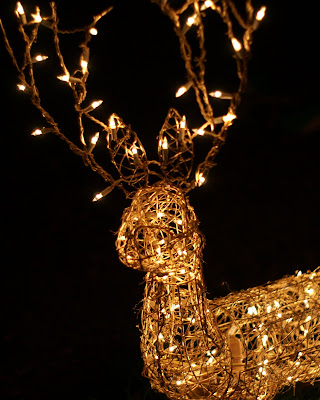 No real pie, this weekend (darn -- the strawberry rhubarb is all gone), just a jumble of life . . . and I haven't sat down to make a button, so you're looking at one of Bookfool's outdoor decorations instead of anything pie-oriented. Yes, it's true; we have a light-up deer with a moving head standing smack in the middle of our monkey grass. He's kind of cute, really, even though I never would have thought to buy a light-up deer, myself. It's the husband's doing.

Speaking of the husband . . . I had him string some new snowflake lights across the porch and he opted to add the deer, plus colored lights on each of our two porch columns (which sounds uppity, but it's not a big porch). He asked me to look at the lights before he was completely finished and asked, "What do you think? Are we veering toward white trash, here?" Snort. Actually, it looks really pretty. We've only decorated the porch, not the entire length of the house, and I think it's kind of nice -- probably good that we're not being entirely Scroogey, for once, when you get right down to it.

We are immersed in cleaning, decorating, tossing out possessions, folding laundry, wrapping gifts, yardwork, moving furniture and trying to clear out our floorless den in preparation for painting and reflooring. The reading has suffered a bit, although I did manage to finish three books and review them all, this week, so I'm happy about that.

Fear in North Carolina: The Civil War Journals and Letters of the Henry Family - I set this one aside for a week, thinking I'd seriously better focus or I was never going to finish any of the books in that 7-book pile I was juggling. It worked; I managed to complete and review three books. Now I can read about Cornelia Henry's life, again.

So far, I'm finding it interesting the way Cornelia wrote about everyday life as a wife and mother, life and death around her, news about the war, weather, problems with the servants, etc., in a clipped manner and yet managed to record just enough info that the reader feels acquainted with her. Of greatest surprise has been the amount of sewing she accomplished -- typically an average of at least one or two items of clothing per day. So far, they've had a terrible time getting the loom to work right.

Queen of the Road by Doreen Orion - About a road trip in a luxuriously converted bus. I've only read a few pages, but will focus more on this one during the coming week. We just left the UFO Festival in Roswell, New Mexico -- I'm still on their practice run in the new bus-slash-home-away-from-home. I was particularly fascinated by the way Orion's husband insisted that she shouldn't make eye contact with anyone at the UFO Festival.

Enslaved by Ducks by Bob Tarte - Nearly finished with this raucous tale of pet ownership, but I have a headache and can't guarantee I'll be done with it by the end of the evening. Still fun, although occasionally the author's sense of humor gets a tiny bit tiresome. I should note that it's typical for me to become weary of consistent wit; even Dave Barry gets to me, after a while. And, I love Dave Barry.

Perfect on Paper by Maria Murnane - Just started this one, a few days ago, although I haven't gotten far, simply because my reading has been so sporadic. I've been pleasantly surprised. It's not trite or redundant for a chick-lit type of book, in my humble opinion. The writing is excellent and so far it hasn't been overly predictable.

Marketplace Memos by David and Jonathan Shibley - I think this is made to be read as a devotional, but I never read anything in the morning and every single day, the way I'm supposed to. I read a chunk when I feel like it. The jury is still out on this one.

Hurricane of Independence by Tony Williams - It may simply be the timing, but this book is not grabbing and holding my attention. I'm going to give it a few more days and if I can't get into the book, I'll pass it on.

I just realized Queen of the Road is not in my sidebar, so I'll have to amend that. Maybe tomorrow. The migraine fuzz is starting to really get to me. I think I'm going to clear off a space on the futon (I've been using it as a folding table) and read. Hope everyone's had a great weekend!
Posted by Bookfool at 2:41 PM