The Plight of the Darcy Brothers by Marsha Altman 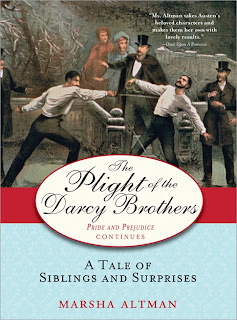 "It belongs to the abbey," his brother protested. "Not to me."

"I will personally pay for the abbey to acquire a new one if they press me on it," Darcy said. "You will have to find a new way to torture yourself. Try falling in love with a woman who despises you."

I just whipped through The Plight of the Darcy Brothers and since we have a 90% chance of thunderstorms, tomorrow, I thought maybe I should go ahead and type up my review, while I'm waiting to become sleepy (I'm not very good at the sleep thing).

Last year, I read The Darcys and the Bingleys by Marsha Altman (click on the title to read my review) and I loved it so much -- in spite of the fact that Mr. Darcy was definitely not entirely Jane Austen's Darcy and there was an inordinate amount of giggling about the marital bed -- that I requested the next book in Altman's series the moment it became available. I certainly hope Marsha Altman's going to continue with this series.

As with its predecessor, one has to be willing to set aside the real Jane Austen and let the author take the reader on a wild ride. And, truly, The Plight of the Darcy Brothers is just that. It's a wild ride. In this installment, pious Mary finds herself in a heap of trouble. Darcy and Elizabeth set out for the continent in order to help her ("to clear her reputation", it says on the book cover). While they're in France, Mr. Darcy discovers that his father kept a terrible secret from him and Georgiana. Actually, two secrets.

In town, Caroline Maddox (née Bingley) is expecting her first child and her husband, Dr. Daniel Maddox, finds himself in the midst of a bit of a royal mess, literally, as he treats a wounded man in a brothel and then discovers the true identity of the man he treated.

I can see why the cover blurb is a little bit vague. I've written the description in my own words and skipped the bleak opening, but I find myself choosing to be equally shifty because there is so much that happens in The Plight of the Darcy Brothers that is surprising and adventurous that I hesitate to give anything away. Let me just say this:

4/5 - Another rollicking fine adventure with the Darcys and Bingleys, well-written (but not perfect -- expect a bit of American vernacular to creep in) and ridiculously fun reading. The author has written notes on the historical inaccuracies contained in the two books at the end. Read this if you like a lot of plot twists and don't mind a book that goes off on dramatic tangents from the original Austen. Like her first book, Altman managed to inject a fair amount of wit and humor.

"Marsha's first book was a story about an alien who came to earth because he won a contest. It was 24 pages long (about 25% bad artwork) and written in fourth grade. It was never published because it was written by a 4th-grader."

I thought that was hilarious, not only because . . . well, it is funny . . . but also because my first book was roughly that length, written in the 4th grade, never published for the same reason, and was quite the opposite -- the story of three young girls who travel to Mars, where they set up a space station and become friends with the aliens. If it hasn't been destroyed in one of our many floods, I probably still have it somewhere. I thought my aliens were really cute, though.

Many thanks to Danielle of Sourcebooks for this advanced reader!
Posted by Bookfool at 11:51 PM