Through the Fire by Shawn Grady 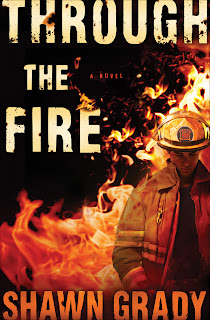 Water channeled through the hose line, straightening the bends. I looked at the nozzle and the bale bent open. Before I could process the chain of events, a hundred and fifty pounds of pressure shot from the tip and the hose slipped from my grip.

The hose danced like a Chinese dragon, flipping and taunting. People ducked for cover. I pounced on it, inching my way back to the tip. Flailing spray shook back and forth.

"Shut that thing down!" Butcher yelled.

Katrina pounded a gate valve on the panel. I reached the nozzle as the stream stopped to a trickle.

I made my feet and closed the bale. The fire reared higher, stretching corkscrew tentacles. I stared into its burning gullet, its jaws agape, descending upon me.

Something exploded. A heat wave seared my neck through my hood. I ducked and spun, catching glimpses of a trailer now fully involved.

--excerpt from Advanced Reader Copy of Through the Fire; changes may have been made

I'm still having a little trouble thinking of anything besides my youngest son's accident, so let me say this first: This book rocks. I'm afraid I'm not going to do it justice because my head's not screwed on straight, but I'll try.

Aidan "A-O" O'Neill has firefighting in his blood. His father died in a fire, his uncle Cormac was a firefighter and Aidan has "the gift" of reading flames. But, he's a little off his game and for a firefighter, that's dangerous. He disregards a direct command and ignores his instinct, leading to the injury of a rookie. Suspended for his part in the accident, Aidan goes to visit his uncle, now retired and living in Mexico. His visit doesn't go particularly well, either, and the timing is terrible. Back home in Reno, an arsonist is on the loose and his long-time girlfriend has decided to call it quits.

Called back from his suspension early, Aidan finds himself exhausted from back-to-back calls, frequently making potentially dangerous mistakes. Meanwhile, a new fire prevention officer named Julianne has caught his eye and her discoveries shed suspicion on an old friend. Who is responsible for the dangerously explosive fires that are being set around Reno and what is the meaning of the pattern of connections to firefighters that Julianne has discovered? Will Aidan get his gift back or will more people end up hurt because of his careless mistakes?

Through the Fire is so good I feel at a total loss to describe it. Shawn Grady is a firefighter, so Aidan is a character written from hands-on experience and it shows. Particularly during the fire and rescue scenes, you feel like you're in the thick of the action. There's a Christian aspect but it's really just a part of characterization. There's no preaching and, actually, it's so minor that if I didn't happen to know Bethany House is a Christian publishing company, I don't think I would have really noticed it at all. The identity of the arsonist surprised me (always a good thing) and I loved the hint of romance. Really, I loved everything about this book.

5/5 - Excellent writing, taut action, an exciting and entertaining blend including mystery and a touch of romance. I loved this book so much I'm not willing to take off even a fraction of a point. My only problem with the book was some of the terminology. I could have used a minor glossary of firefighting/EMS terms (I did know some from previous reading). Since my book is an ARC, I don't know if there's any kind of glossary in the final copy. However, the book is perfectly readable without help; it just would have been nice, on occasion, to have a word or two defined.

And, back on the home front:

Since I'm having so much difficulty concentrating and the extra driving (back to being the Mom Taxi Service) and errands are wearing me out, I've decided it would be best not to fret about the books that are scheduled for review, this week, and do my best to get caught up and move on without going so far as to require therapy. So, there may be a couple of tour posts without reviews, this week. I haven't even begun to read the tour book scheduled for tomorrow. My apologies to anyone whose book gets shoved aside for a time. I've known for a while that I overbooked myself in July, but I certainly didn't anticipate an accident to throw an extra kink in a month when the days already seem too short to keep up.

Many, many huge, huggy, gushy thanks to all who have left comments and hugs, sent up prayers of thanks and told me what a neat kid I have (obviously I'm biased, but I'm certainly very pleased with his attitude).

Bookfool, who hopes to get back to normality very soon