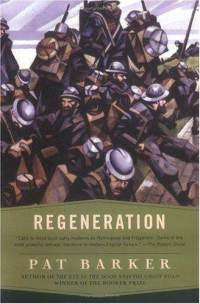 Regeneration by Pat Barker
Copyright 1991
Penguin Books - Historical Fiction/WWI
252 pages
Regeneration is the first in a series of books by Pat Barker that are set during WWI. I don't know how the series continues, whether it follows the same characters or new ones, but Regeneration is set at a mental hospital for shell-shocked soldiers called Craiglockhart in Edinburgh, Scotland.
The year is 1917 and W. H. R. Rivers has a new patient set to arrive. The patient is Siegfried Sassoon. Although Sassoon has had nightmares and a few horrifying hallucinations in the past, he is being sent to the facility mostly to keep people from having to actually address the issue Sassoon has brought up. Having composed a letter saying he thinks England needs to get out of the war, that men are dying needlessly, there are a few people who want him silenced and the best way is to make him appear unstable. His best friend also wants to prevent a court martial and helps to get Sassoon sent to Craiglockhart.
Sassoon is perfectly sane, although he does eventually develop an interesting problem with ghosts. But, he's required to chat with Rivers and through the interaction between doctor and patient, as well as a few other key characters, you get to know the doctor and his humane treatment methods in a time when post-traumatic stress was not yet identified or named and certainly not understood.
There's a lot to Regeneration, in spite of its fairly short page count. Toward the end, Sassoon is due to go in front of the medical board. In those days, a "cured" patient was sent right back overseas to fight, again. Sassoon, in spite of being strongly against the war, desires to return to the front. Rivers, meanwhile, has determined that he (Rivers, himself) is due for a change and there is a short but wrenching section during which he goes to London to check out the hospital where he will be working. There, the contrast between humane and cruel treatment is clearly drawn during a horrifying scene describing the "treatment" of a mute soldier forced to speak after hours of torturous shocks with electrodes.
I didn't realize Rivers, Sassoon and many other characters were actual historical figures until I got to the end of Regeneration and read the author's notes. Then I dashed over to Wikipedia to read a bit more. The Wikipedia entry about the Regeneration series is fascinating. I only read about the first book; from there, I jumped to the entry about Rivers and then read about Sassoon. The third book in the series, The Ghost Road, won the Booker Prize in 1995.
The bottom line:
A fascinating, sometimes horrifying but very vivid and realistic look at treatment of post-traumatic stress and injuries during WWI, with telling descriptions of experiences by the soldiers in treatment. While the author occasionally lost me -- sometimes in dialogue, chiefly when describing things that might be common knowledge in the British Isles or for those who are knowledgeable about WWI, but certainly vague in my eyes -- I thought Regeneration was engrossing and quite a learning experience. I do plan to read on, although I own a copy of Regeneration but not the other two books and it may be some time before I get around to the following two. Recommended, with a warning that Regeneration can be a painful, jarring and even gruesome read at times because it is so realistic. An excellent fictionalized account of real-life characters.
Former blogger Kookie (aka "Michelle") didn't like Regeneration, but I neglected to ask her why. I did think the author's writing was sometimes a little nebulous where it could have easily been made clear, but other than that . . . I really thought it was so very engaging and the characters so well-developed that I can't pick on it too much. I liked the way the characters seemed to make so little sense, at times, in their thought processes. It occurred to me that humans really don't necessarily make sense. We're illogical. We say one thing and do another or change our minds abruptly. That was a part of where the realism came into play.
Cover thoughts:
That's not the cover of my book, but it's my favorite of the images I found on Google Images. Mine is ugly. But, there is something very special about my copy. It has a few pages with little mouse bites. You can actually see the tiny teeth marks! I'm probably the only person on the planet who thinks that's cool.
In other news:
I am having a terrible, horrible, no good, very bad time getting around to blogging. I think it's probably a combination of heat and feeling a little overwhelmed with all that I have to accomplish in the coming months. So, while I keep thinking I want to clear out my sidebar by whipping out several reviews at once, it's not happening. If I continue to feel blah, I'll just take a couple weeks off. I don't have any scheduled reviews until June 30 so if I disappear for a couple weeks, you know when to return. I will have a post of Dug Down Deep by Joshua Harris posted on the 30th.
Photo of the day:
The cats aren't too energetic, either. Note the difference in size between my two girls. Isabel is now full-grown, so I guess she's just going to stay tiny and delicate. "Tiny" is, in fact, one of her nicknames. I've been calling her that since she arrived at our house. Last time she was at the vet, Izzy weighed a mere 5 pounds. I'd guess she's up to 6 pounds, by now. Fi, on the other hand, is a 13-pounder. 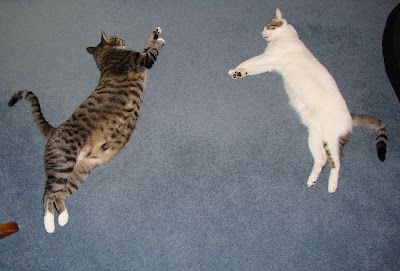 Facebook friends will have already heard this story, but I must share a little cat tale from this morning. I went out to pick up my new eyeglasses and when I returned, Isabel greeted me in the living room. I said hello and asked her, "Where's your sister?" Izzy looked at me, looked toward the kitchen and then went bounding off (bounce, bounce -- she really has the cutest way of running) to the breakfast nook, where she stopped directly below the chair in which Fiona was sleeping. She looked back at me and, of course, I exclaimed at her cleverness. And, then she jumped up into the chair next to Fi and ducked her head for a little grooming from sis.
That Isabel is one smart cookie! In fact, I've only had one cat I considered a little dim (Miss Spooky) but after her tremendously intelligent adoptive sister passed away, I discovered that I just wasn't paying attention. Spooky wasn't necessarily as sharp as Sunshine, but cats are pretty amazing creatures and they understand more than we often realize. Anyway, a little fun from the House of Bookfool.
Happy, happy day!
©2011 Nancy Horner. All rights reserved. If you are reading this post at a site other than Bookfoolery and Babble or its RSS feed, you are reading a stolen feed. Email bookfoolery@gmail.com for written permission to reproduce text or photos.
Posted by Bookfool at 5:34 PM