Demian by Hesse and The Book Borrower by Makkai

Because I feel like I have very little to say about either of these books, I've decided to lump them together in one post.

Demian by Hermann Hesse is a book I plucked off my shelves when someone on Twitter mentioned a German Lit discussion. Unfortunately, I didn't bother to "favorite" that comment and never saw another tweet about a discussion, but that doesn't matter. At the time, I was having trouble settling on a book to read. I wandered to my shelves to look for the book the twitterer mentioned, Homo Faber by Max Frisch, but wasn't able to locate it (I've since found my copy). Demian was on the shelves, though, and when I sat down to read a few pages, it grabbed me.
Demian is a very internal book. I had to look up notes about it because, to be honest, it's hard to describe. Wikipedia's entry on Demian describes it as a Bildunsroman, a novel focusing on the psychological and moral. Well, that's certainly on target. Max Demian is the name of a friend of the hero, Emil Sinclair, who begins with a story of being bullied and lying to impress a bully and feeling tremendous guilt when his immoral choice causes him to end up in an even worse situation. When Emil meets Demian and Demian somehow drives away the bully, Emil is grateful but also impressed by his maturity and insight. Eventually, he becomes obsessed with Demian's ideas about spirituality. After many years, he slowly settles on his own beliefs.
Here's the plot summary from Wikipedia:
Emil Sinclair is a young boy raised in a bourgeois home, amidst what is described as a Scheinwelt, a play on words that means "world of light" as well as "world of illusion". Emil's entire existence can be summarized as a struggle between two worlds: the show world of illusion (related to the Hindu concept of maya) and the real world, the world of spiritual truth. In the course of the novel, accompanied and prompted by his mysterious classmate 'Max Demian', he detaches from and revolts against the superficial ideals of the world of appearances and eventually awakens into a realization of self.
This is the kind of book I probably really needed a teacher to guide me through, but I liked the prose; I was drawn in and really wanted to know what would become of Emil and his friend, whom he refers to as "Demian". I'm not all that familiar with existentialism and I admit that a good portion of the book eventually became a little frustrating. But, I don't regret reading it. Demian was definitely an unusual read for me and reading it broke me out of my slump. It also made me yearn to go back to school to take some literature classes. I'm glad I read Demian, but it was certainly not a favorite so much as a nice break from the common.

The Borrower by Rebecca Makkai is one of my "Goodbye, Borders" purchases. I bought it primarily because of Jill, aka Softdrink's review at Fizzy Thoughts.
In The Borrower, Lucy Hull is a young librarian living in a small Missouri town who works in the children's section of her library and does weekly chapter-book readings. One of her favorite patrons is a 10-year-old boy named Ian Drake. Ian's parents are hyper-religious, the kind who don't allow their children to read Harry Potter . . . the banning kind, I suppose. Ian likes to read everything and Lucy is happy to check out books she knows his mother won't approve of and quietly smuggle them to Ian.
Lucy's not particularly happy at her job, but she's got a bad case of inertia. When Ian spends the night in the library and she finds him in the morning, Lucy tries to take him home. But, she doesn't have a phone number or address for Ian's parents and he's not the slightest bit interested in sharing that information. Instead, he tries to direct her to his grandmother's home. Even though Lucy suspects the grandmother is fictional, she goes along with him and ends up inadvertently driving him across the state line . . . kidnapping him without intent. And, then they just keep on driving and end up spending weeks away from home while his parents and the police are frantically searching for the missing boy.
The idea is far-fetched, but The Borrower starts out very fun because of the light-hearted tone and all the references to books. Unfortunately, the author seems to have had an agenda. Eventually, the book becomes a bit of a diatribe about tolerance and a rather scathing view of Christianity. The author confuses intolerance with Christians, in general. Of course, Ian Drake's parents are the extreme type -- book-banning, homophobic and willing to close their child off from the world, if necessary. But, being a liberal Christian who loves her gay and heterosexual friends equally, I was really put off by the preaching. In the end, I felt like The Borrower was a waste of perfectly good reading time and regretted the purchase, but not only because of the heavy-handed theme. I also grew weary of Lucy's voice. She's cheeky but eventually she becomes tiresome.
The one thing I continued to love about The Borrower was the literary references. And, Ian Drake is a very lovable, spirited character. Lucy's Russian heritage and her father's illicit activities are an important part of the book and pretty entertaining, as well. Unfortunately, there were two things that were supposed to be mysterious during her travels and I figured out both of them long before the end of the book, so they turned out not to be surprising. I don't personally recommend the book.
And, now, you must have a happy picture to offset one iffy and one negative review. Things are blooming like crazy, now that it's cool and lovely in Mississippi. Here's one of my favorite recent photos from our yard, a rosebud: 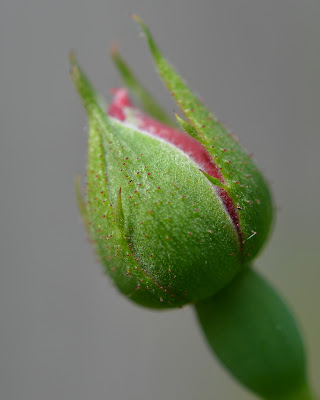 The onslaught will continue as long as I feel like reviewing, but as always . . . no need to comment on everything, if you're a regular reader!
©2011 Nancy Horner. All rights reserved. If you are reading this post at a site other than Bookfoolery and Babble or its RSS feed, you are reading a stolen feed. Email bookfoolery@gmail.com for written permission to reproduce text or photos.
Posted by Bookfool at 12:03 PM

Email ThisBlogThis!Share to TwitterShare to FacebookShare to Pinterest
Labels: book reviews, flower photos, one recommended one not recommended