Some of these books have been sitting in my sidebar for so long that I feel like I ought to go to confession to ask forgiveness. Except, I'm not Catholic . . . but you know what I mean. The guilt is there, although only one is a review book. 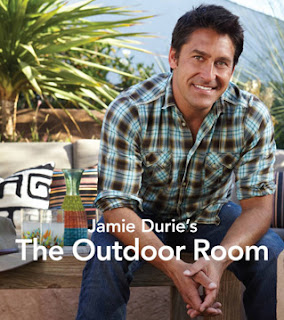 Jamie Durie's The Outdoor Room is one that I didn't actually finish 100%. I loved what I read, but the farther I got into The Outdoor Room, the more I realized I will never have an outdoor room in Mississippi. We have enough trouble with maintenance in the backyard. I can't even begin to imagine fighting poison ivy growing over the walls of a corner set aside for enjoying the outdoors. I would need a lot of help creating that kind of space and making it easy to maintain.
However, I read most of it and I like Durie's ideas for design. They can be carried into your house, as well. The starting point to creating a relaxing space, as described in The Outdoor Room, involves examining your own taste by collecting pictures from magazines, taking photos, etc. of textures, designs and colors that you like and then using the things you love to create the perfect space. I've done similar (collected photos and put them on a bulletin board) but hadn't thought to take pictures of things like, say, ocean or grass or rocks if those are things that appeal to you visually and then trying to figure out how to work the colors and textures you like into a room with other design features.
Durie also talks about things like light (because work spaces tend to be dark, making your outdoor space offset your long, dark days), different types of design, shapes, plants to use in your outdoor room, specific projects he's worked on and their inspiration, where certain designs work. There's a lot of text in this book and it's all worth reading. I need to go back and reread the entire book, now that I'm done having a private temper tantrum about how awful the outdoors is in Mississippi.
I highly recommend Jamie Durie's The Outdoor Room to those who want new ideas for decorating, whether or not you plan to build an outdoor room, because I think it's great for inspiration inside and out, although it definitely fulfills its purpose in helping the reader to visualize his or her own outdoor room. One of my favorites is the exotic oasis in Seattle, which was inspired by Egyptian spaces but which looks very zen to me. Since we returned from Japan, my husband and I have been mulling ways to make our home reflect that sense of calm we got from the zen gardens and I think this book can help. Many thanks to Harper Design for the review copy of The Outdoor Room. 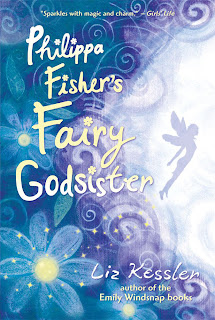 Philippa Fisher's Fairy Godmother by Liz Kessler is an e-book I got as a freebie. I read it when I couldn't get myself to focus on anything else and it did help pull me out of my slump, but I found it disappointing. Philippa has always believed in fairies. When her best friend moves away, she's heartbroken and cries on a flower. The flower responds and Philippa is convinced it's a fairy disguised as a flower. She plucks it, carries it to her treehouse and plans to return at midnight to see the fairy transform. But, then she changes her mind and disposes of the flower.
The next day, a sullen new girl shows up at school and Philippa tries to befriend her. After a rocky beginning, they eventually become fast friends and the new girl reveals that she's Philippa's fairy godmother (but that sounds strange, so they decide to call her a fairy godsister). I don't actually remember much beyond that. I just recall feeling disappointed. It's a cute book and it gets high ratings from its youthful intended audience -- middle readers, I think -- and their mothers. I recommend Philippa Fisher's Fairy Godsister to youngsters, in particular (Moms - it's a nice, clean read) and was happy that it broke my reading block temporarily, but it just didn't do much for me. Might have been the timing. 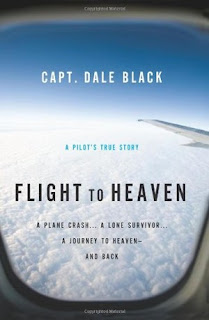 Flight to Heaven: A Plane Crash, A Lone Survivor, A Journey to Heaven and Back (that's not really the subtitle, but it's hard to read the tiny print in that image and gives you the gist of the book) by Capt. Dale Black is the story of a man who was the only survivor of a plane crash in 1969, at the age of 19. It tells of his determination to recover and fly again, how he slowly regained his memory and went on to become a pilot for a major airline, and a heart-pounding edge-of-your-seat story about a second close call when he flew to Africa on a mission trip.
I absolutely could not put Flight to Heaven down, once I began to read it. Dale Black's story is stunning and he does a great job of making you feel like you were there. Although he does talk about eventually remembering that he'd gone to heaven, his description of heaven is a minor portion of the book (in fact, that was the part I enjoyed least and found myself skimming). Flight to Heaven focuses on his experiences, the emotions he felt and his determination to recover, as well as how he slowly regained missing memories. When you read about his injuries and how, after the plane crashed into a solid monument he fell 70 feet, you can't help but realize that it really is quite astounding that he survived at all.
The crash changed the author's life and made him determined to share his beliefs, so there's plenty about Christianity but he comes off as humble and a man of strong character rather than preachy. He admits to times he was too pushy about his beliefs and talks about how he learned from his mistakes. I'd recommend Flight to Heaven to anyone and everyone, if only because it's an excellent lesson in what positive thinking can do for an individual. Flight to Heaven was another e-book freebie. I didn't actually mean to read it but I hit the wrong image, read a sentence or two and couldn't stop, by the time I realized I was reading the wrong book. Highly recommended. 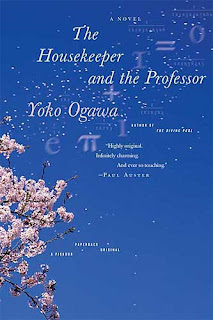 The Housekeeper and the Professor by Yoko Ogawa is about the relationship between a single mother, the professor she cares for and her son. The professor is a brilliant mathematician who suffered a head injury 30 years before she met him. His memory only lasts for 8 hours, so he wears a suit covered in notes to remind him of important things.
During the time that the housekeeper works for the professor, she and her son get to know him and he teaches them some math principles, a good portion of which I didn't follow. Some of the math was fascinating, but I mostly liked the rest of the story -- the building of the relationship between the odd trio of unnamed people and the denouement, which is not entirely unexpected but is still satisfying. I might have used a tissue or two while reading this book. While I found the math portions of The Housekeeper and the Professor down were a little dull, I think the story is a good one and I recommend it. I got my copy of The Housekeeper and the Professor from Paperback Swap.
©2011 Nancy Horner. All rights reserved. If you are reading this post at a site other than Bookfoolery and Babble or its RSS feed, you are reading a stolen feed. Email bookfoolery@gmail.com for written permission to reproduce text or photos.
Posted by Bookfool at 11:20 AM