Binge reading.  You all know what I'm referring to, right?  Not just reading any pile of books but getting so caught up in a subject, grabbed by an author or sucked into a series that you can't bear to read anything else till you've gotten your fill. 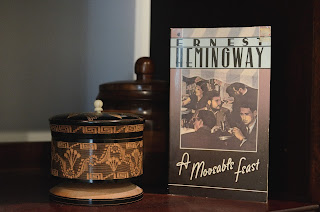 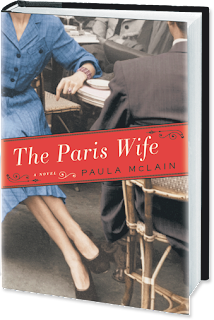 I enjoyed both, but found that there were times Hemingway's spare writing was just a bit too minimalist for me.  I wanted more information.  In fact, I spent a lot of time looking up the various artists with whom Hemingway and his wife, Hadley, spent time.  Even Scott Fitzgerald -- whom everyone seems to know a good deal about -- I looked up to compare images of him to Hemingway's physical description (and then kept reading about Scott and Zelda, who are so tragically fascinating that I will probably always be happy to read more).

The Paris Wife by Paula McLain was the perfect follow-up to A Moveable Feast, as it describes not only the Paris years, but the entire dating-to-divorce spectrum of Hadley Richardson and Ernest Hemingway's relationship from Hadley's point of view and in much greater detail.

I found Hadley a likable woman, intelligent enough to challenge Hemingway, committed enough to continue trying to win her husband back and not abruptly leave him when she found out about his affair with Pauline Pfeiffer, surprisingly well suited to her husband.  Reading from Hadley's POV really rounded out that image of the Paris years, the so-called "Lost Generation" and the personalities of the various artists they spent time with in Paris cafes.

I found a few very interesting links when I was looking up images of The Paris Wife:


In an unusual switch from my normal reading method, I purchased The Paris Wife in e-book form because I don't yet have a library card for my new local library.  It didn't kill me, although I still prefer the sensation of holding a book in my hands, the ability to use paper Post-its and flip to them with ease, the ability to pass a book on to a friend after I finish, and not having to recharge, ever.

The F2F meeting about the two books was a total riot.  One of our members wore a beret and brought a bottle of absinthe, complete with a strainer and sugar cubes.  The group is often lively, particularly when they have strong feelings about a book or character, but they were even more enthusiastic than usual.  Maybe it was the absinthe.  I didn't drink any (I had a 30-mile drive home, so no alcohol for me) but regardless, the discussion was a blast.

Because I knew A Moveable Feast and The Paris Wife were on the agenda, I was very excited when I was offered a review copy of Hemingway's Girl by Erica Robuck. 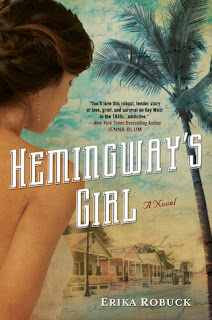 Hemingway's Girl adds fictional characters to the "Hemingway, wife and friends" reality. This time, the setting is their well-known house in Key West, Florida, during the time that Hemingway was married to second wife Pauline and they had two rambunctious young boys. The year is 1935.

In Hemingway's Girl, Mariella's father has died and her mother Eva is suffering from a paralyzing depression. Mariella's younger sister Lulu often suffers from mysterious high fevers and her other sister Estelle has not spoken since their father's death.  They're much younger than Mariella and only she can feed the family and pay their bills. But, it's becoming more difficult. Jobs are scarce and even the fish aren't selling well.

When a friend of the family helps Mariella get a job working as a maid in the Hemingway home, she is thrilled.  But, Hemingway is a mercurial man, hot-tempered and driven but always flirtatious.  Mariella finds herself drawn to "Papa's" oversized personality and energy. But, she also knows he's married and she's a good girl. When a veteran named Gavin enters her world, Mariella still finds Hemingway magnetic.  But, her feelings for Gavin are different.

Will Mariella fall for a married man or end up with a veteran who still carries emotional scars from war?    When Pauline suspects a building "relationship" between the beautiful "help" and her husband, will Mariella be able to keep her job?

Mariella is a great character.  I loved her strength, morals and work ethic.  She goes to the bar and to boxing matches, gambles to try to win more money and has big dreams.  She's tough but flawed.

Pauline is portrayed as jealous and spiteful.  Pauline was known to have been pretty well-read, so I thought her character could have been a bit more intellectual and less whiny but I don't know when their marriage began to falter.  Hemingway is egotistical and always trying to prove his manhood but has a big heart.

Everyday socializing and parities, Hemingway's fishing trips and boxing, a trip to Bimini, a romance and a hurricane -- a lot happens in Hemingway's Girl.  If you like plot-heavy, romantic, historical fiction, Hemingway's Girl is a perfect escapist read.

My only real complaint, besides Pauline's characterization, was the fact that a large portion of the characters used the same expression. "God" or "Oh, God" was used frequently, but I seldom thought it added any impact or urgency to what the characters had to say; and, the fact that it was used so commonly was, I though, possibly suspect for the time period.  Not that long ago, "You must never take the name of the Lord in vain" was a pretty common refrain.  Otherwise, I thought the book was very well-written and plotted.  I liked the range of characters and thought it was an enjoyable read.

All Heartily Recommended!  I enjoyed all three of these books for different reasons.  Hemingway's memories were fascinating, but I wanted a bit more than I got from A Moveable Feast. A Paris Wife nicely filled in the details from those years and expanded on them a bit.  Hemingway's Girl then moved forward to another decade and took an entirely different tack with a fictionalized set of characters who enter a year of his life with second wife Pauline, described in a new location and during a different phase of his writing (including less worry and more arrogance).

I've got a copy of Michael Palin's Hemingway Adventure that I'd like to add to my reading schedule; and, I'm quite anxious to read The Sun Also Rises, as it was written during the Paris years.  But, for now, I really need to try to catch up with the backlog of review books I carried from house to house.

Do you ever binge read?  Any particular binge that comes to mind?  I'm curious.  Janet Evanovich's early Stephanie Plum novels were binge reading for me, years back.  I remember reading the first 4, back-to-back.

©2012 Nancy Horner. All rights reserved. If you are reading this post at a site other than Bookfoolery and Babble or its RSS feed, you are reading a stolen feed. Email bookfoolery@gmail.com for written permission to reproduce text or photos.
Posted by Bookfool at 3:17 PM