The Fairest of Them All by Carolyn Turgeon 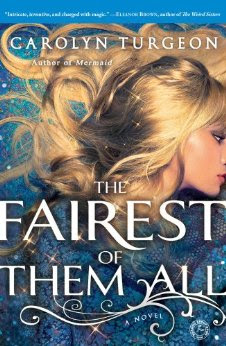 The Fairest of Them All by Carolyn Turgeon
Copyright 2013
Touchstone Books - Fantasy
262 pp. (includes a reading group guide and conversation with the author)

I was the girl with the long long hair, trapped in the tower.

What led you to pick up The Fairest of Them All?

I was offered The Fairest of Them All for review and accepted it because I enjoyed one of Carolyn Turgeon's previous books, Godmother.  Even though I remember very well how much I disliked the ending of Godmother, I also remember the way the story captured my imagination so I was excited to see that the author had a new fantasy release.  In fact, I watched my porch like a hawk, I was so excited.

Summarize the plot but don't give away the ending.

****POTENTIAL SPOILER WARNING*****
There may be some spoilers in this description. I'm not certain but skip this part and read the publisher's blurb from The Fairest of Them All, here, if you're concerned.

Rapunzel lives in the forest with her adopted mother, Mathena, a witch who calls herself a healer. Mathena used to work in the palace but she had to leave when tragedy and a change in beliefs from mystical ways to religion caused her to fall out of favor.

When the prince hears Rapunzel singing, he climbs her hair into the tower and they spend a night of passion together.  Then, he marries a princess from a neighboring kingdom and they have a daughter, Snow White.  While Rapunzel waits and hopes for the return of her prince, she learns to heal and weave spells of her own and tends to the garden with Mathena.  Then the queen dies mysteriously and Rapunzel is given the chance to take her place.  But, can she learn to be the queen her kingdom needs?  What will happen when Rapunzel's magic mirror tells her she's no longer the fairest in the land?

A modern mash-up of "Rapunzel" and "Snow White" in which Rapunzel learns her adopted mother's witchy ways and becomes envious of beautiful Snow White.

What did you like best about The Fairest of Them All?

I loved the way the author blended two fairy tales to create a unique new story and I loved the descriptions of life in the forest, when Mathena and Rapunzel worked side-by-side in the gardens and healed the women who came to them for help.  Sometimes the writing was absolutely magical.


The trees stretched blackly into the sky, which we could barely see for the snow that kept falling, covering everything, hiding every sin except for those I was forced to remember.

And, I did like the fact that Rapunzel redeemed herself in the end and learned her true story.  Hints are dropped along the way but it takes Rapunzel a very long time to figure out she has been misled and find the right path. When she does, the result is a sigh-of-relief type of ending.

What did you dislike about The Fairest of Them All?

My first thought was, "This is so very, very dark," but after reading up on the original tale of Rapunzel, I was reminded that fairy tales are typically violent and tragic. The Brothers Grimm wrote some vicious tales.  I do like a heroine I can get behind and would have personally preferred a softening of Rapunzel, so I had to keep telling myself, "patience, patience" as I read, with hope, waiting for things to take a positive turn. It's very difficult to find anything redeeming at all about Rapunzel till the end and, even then, she has already gone too far in many ways but that's probably part of the point.  It's really a fascinating mash-up.

Recommended - A surprising blend of old fairy tales with modern storytelling that is imaginative, dark, creepy and oddly compelling.  The Fairest of Them All would actually make a very nice choice for the RIP VIII challenge.  It was a little too dark for me, in some ways, but I still enjoyed the story and -- since I am a person who craves sweetness and light -- my preference is certainly not a criticism of the storytelling.

©2013 Nancy Horner. All rights reserved. If you are reading this post at a site other than Bookfoolery  or its RSS feed, you are reading a stolen feed. Email bookfoolery@gmail.com for written permission to reproduce text or photos.
Posted by Bookfool at 12:48 PM