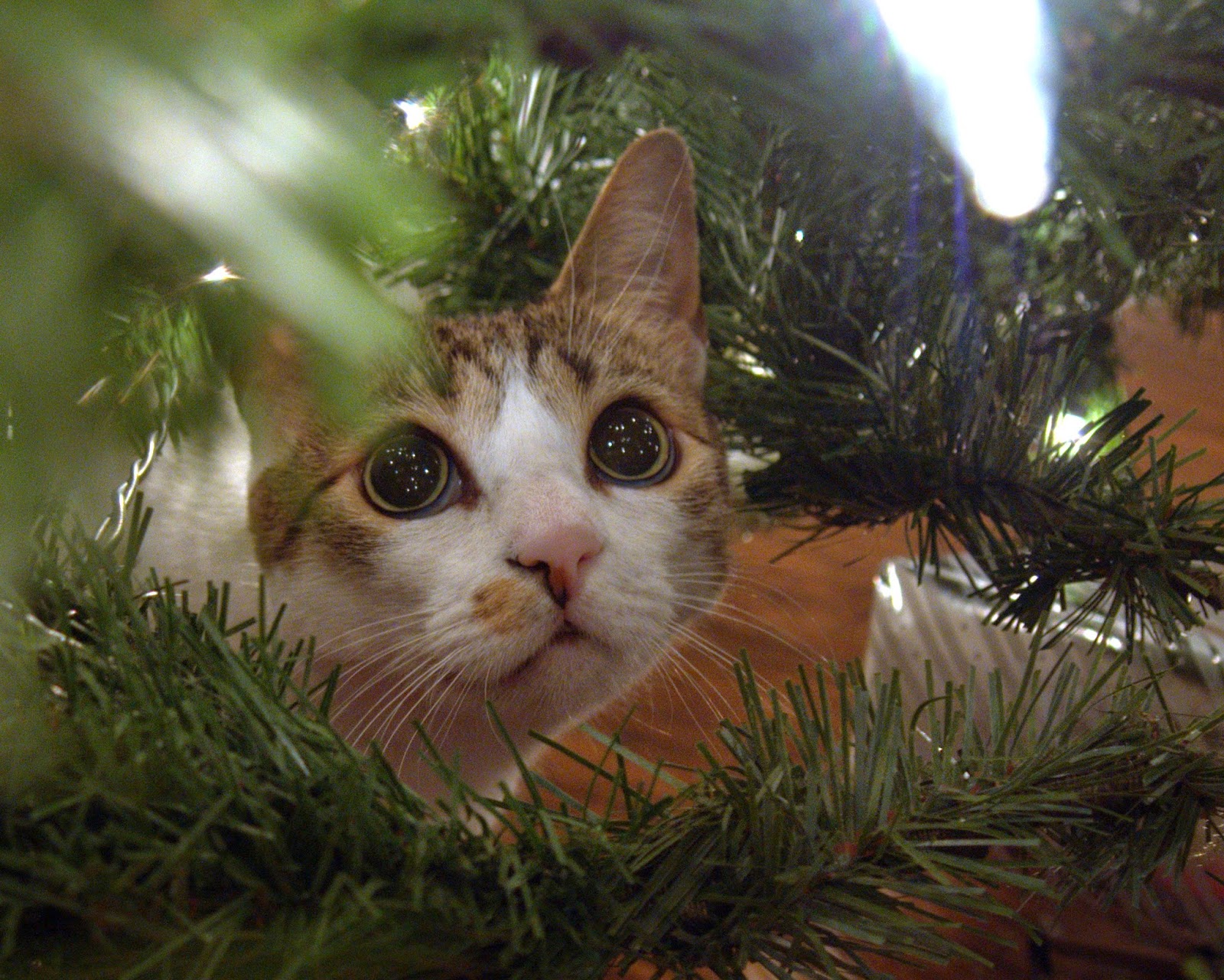 Christmas in 2014 was, for this family, all about starry-eyed kitties climbing trees (Isabel), untying ribbons on packages (both kitties), turning ornaments into soccer balls (Fiona) and a good bit of general mayhem. In the past, we've either plucked Isabel out of the tree or shouted at her when she attempted to climb. This year, we delayed decorating, apart from a few unbreakable ornaments at the bottom, and just let it go. The only thing I wouldn't let the cats do? Chew on the tree. I didn't want them to ingest fake pine needles. Otherwise, I let the kitties have at it and, amazingly, it went very well. Isabel moves very cautiously when she climbs so it looked like wind was blowing through the limbs but the tree stood firm and no ornaments fell; Fiona stuck to playing with the unbreakable ornaments on the lower limbs. They both made us laugh every day. 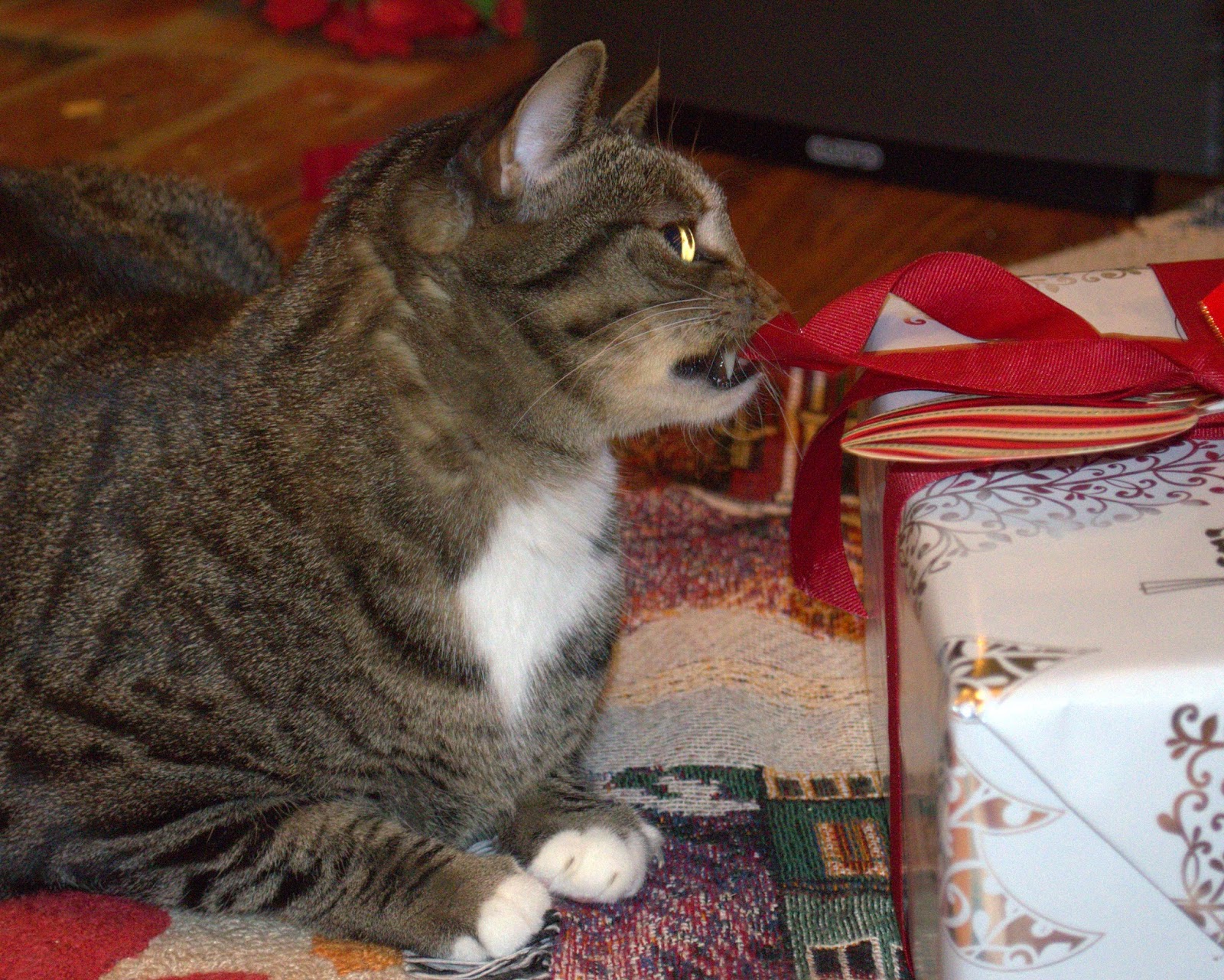 Sometimes the two kitties even played together. 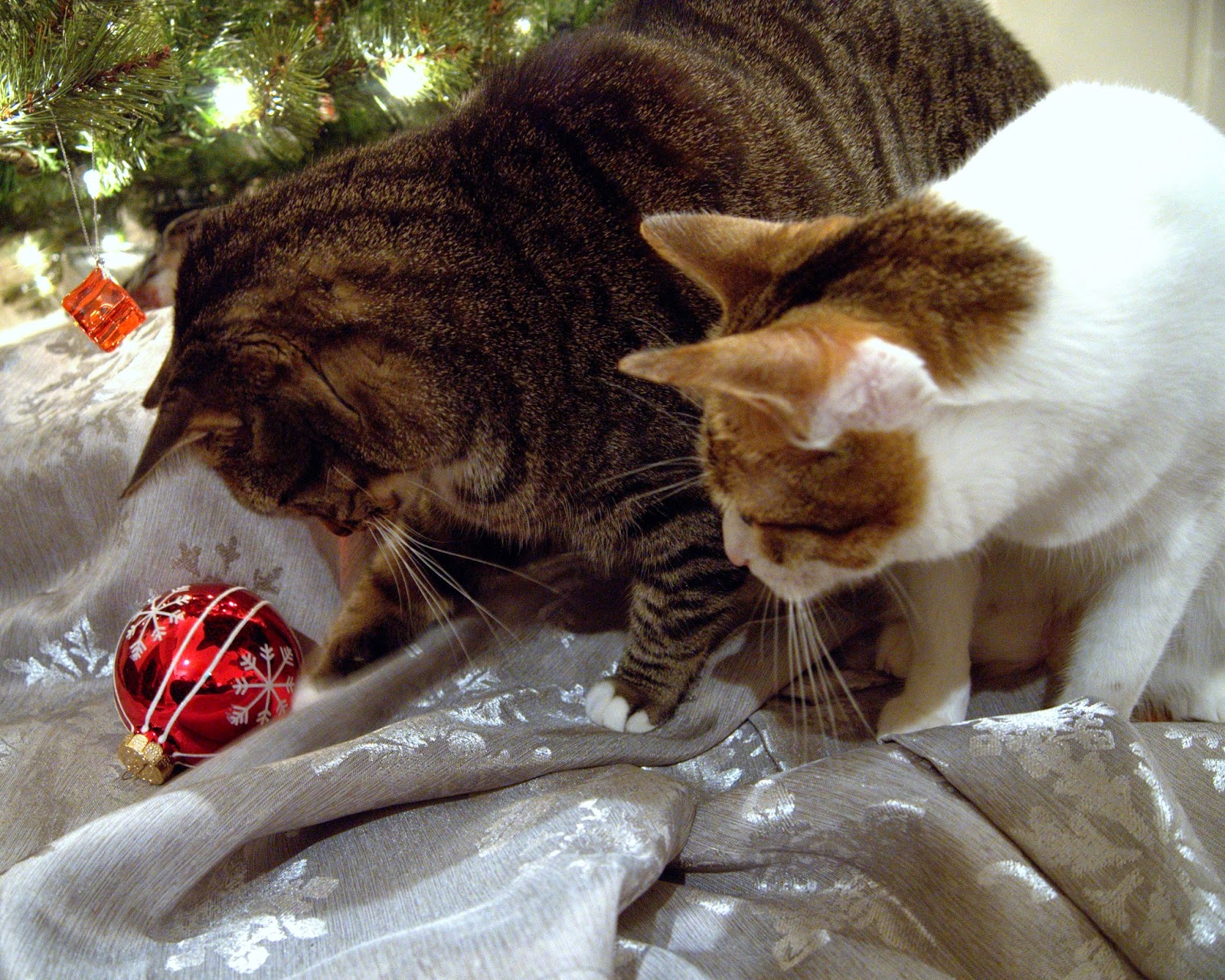 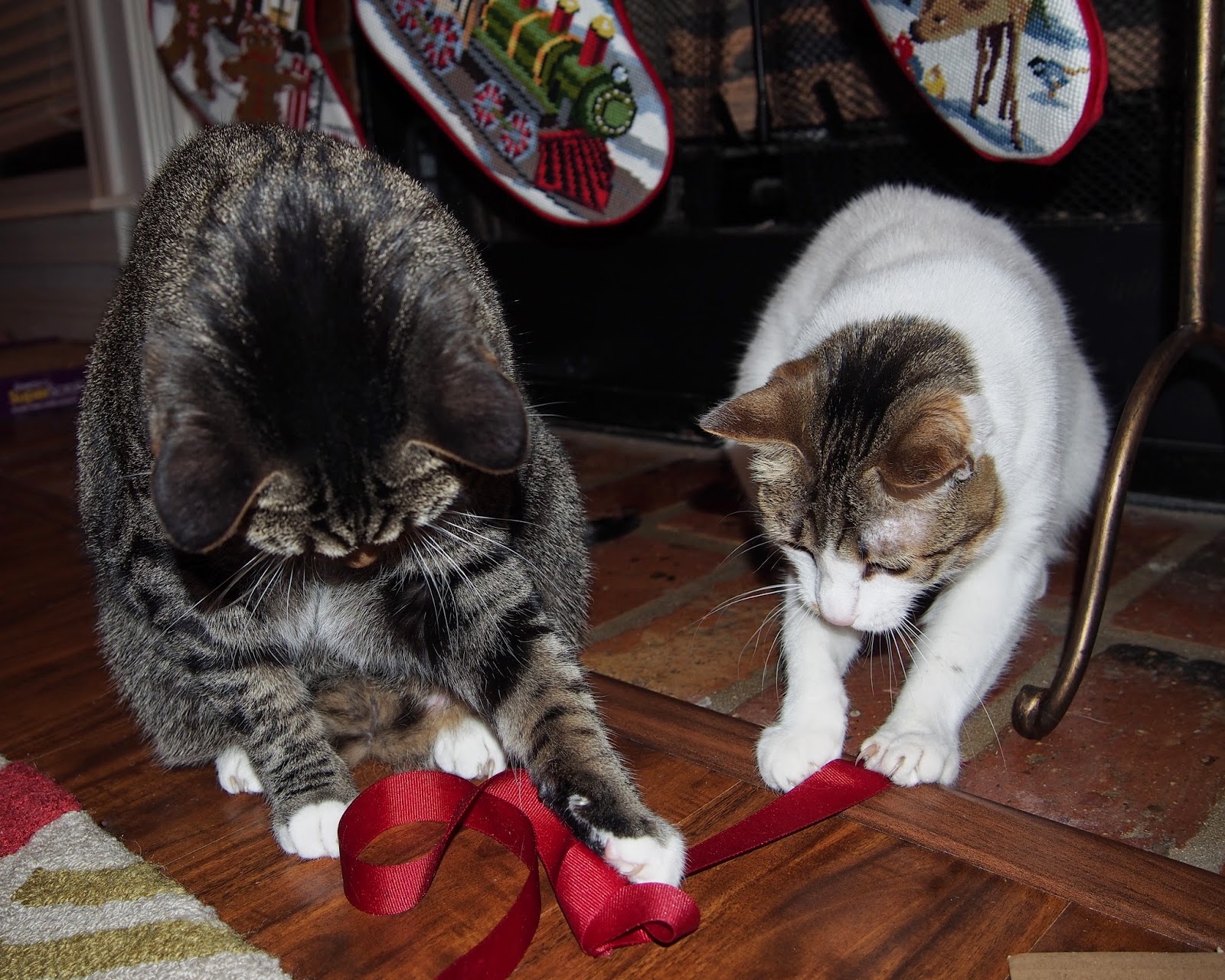 There were only three of us here, not counting the kitties. I prefer big family gatherings but have to admit that I appreciated the low-key family time. There were no big fancy dinners, no big plates of hors d'ouevres. I asked friends for sugar cookie recipes and got several suggestions, so we chose two of them, prepared both and compared, mostly for the sake of getting into the spirit of Christmas.

New Year's Eve was equally subdued. We started a new tradition, watching O, Brother, Where Art Thou? while neighbors were setting off noisy fireworks. And, I began working on keeping my resolutions before the New Year began, with the thought that I'd already come up with them so I might as well get started.

About those big changes:

I don't feel like I need to list everything I'm planning for 2015, but there are a few things worth mentioning and they're major. I'll update my Review Policy, soon, to reflect my intent for the coming year.

My priority in 2015 is writing fiction. Long before I became active in reading groups and, eventually, blogging about books, I was a writer. I wrote obsessively, was active in a number of writing groups, attended conferences, and was published (a short story, a monthly humor column that I kept up for 3 years, and a number of articles about writing). I've finished several novels. The only time in my life I can recall not writing was during my college years when I was too focused on studying and marrying that good-looking boyfriend of mine. The reason I stopped writing, pre-blog, is not something I want to go into but it has passed and I've been ready to focus on fiction writing for a long time. I just wasn't ready to change my blogging habits. I think it was pretty clear in 2014 that I was struggling with how to fit both into my life. It didn't work. This year, I've committed to writing daily -- even if that only means a single sentence -- and, so far, I've managed to do so.

That leads to what will be changing. Because I've committed to writing daily -- and I have a few other daily resolutions, which I won't go into -- it seems like my days are absolutely crammed. I think that's good in many ways but it does mean I'm going to have to stop blogging regularly. I've got a few books I desire to write about because they were excellent and they just happen to have been sent by publishers; and, I'm going to post my 2014 Reads list, tomorrow. Beyond that, I don't know. I've considered going on an extended hiatus because I haven't really felt compelled to write about books the way I used to and I think I either need to continue not blogging till the urge returns or simply go to weekly or monthly posts about what I've read -- maybe weekly Monday Malarkey and a month in review. Thoughts are welcome.

I'm going to ponder which way to take the blog for a few more days. In the meantime, I'll post my 2014 reads. Just before I went on my Christmas break, I reverted to letting books call to me rather than trying to fit in whatever ARCs were soon to be released. So far, a return to reading the old-fashioned, pre-blog way is totally working for me. I've been in a classics and non-fiction mood and the joy of reading is back. My reading goal for 2015 is lower because I intend to read slower, indulge in longer books and savor them instead of crashing through as many books as possible. Since some of the books I've read were sent by publishers I will definitely write about them soon, if only in "mini" form.

Also, that sidebar is, of course, totally outdated. I finished Eleanor Roosevelt's autobiography weeks ago (it is a fabulous rendering of political history as viewed by a woman I have long admired). I'm not sure whether I'll bother with keeping the sidebar updated. That's another thing to ponder.

The bottom line: blogging is definitely going to be a lesser part of my life in 2015, whether I go back on hiatus or just write occasional updates but I'm still considering how to go about enacting changes.

Best wishes to all for a fabulous year!

©2015 Nancy Horner. All rights reserved. If you are reading this post at a site other than Bookfoolery  or its RSS feed, you are reading a stolen feed. Email bookfoolery@gmail.com for written permission to reproduce text or photos.
Posted by Bookfool at 2:59 PM