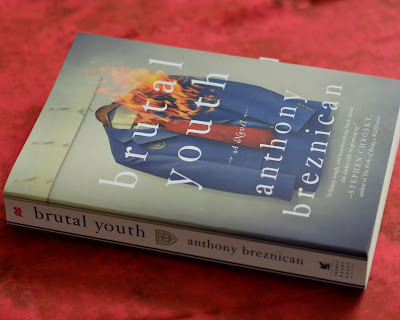 Davidek began reading the paper every day, knowing there had to be an update, some follow-up, some explanation about what happened. But there was nothing, not even a week later. "I think I saw something about it on CNN," Bill Davidek said at dinner. "'Playground fight at local school,' right?" The old man scratched his beard with a self-satisfied smile.

"Come on, Dad! That guy jumped off the roof! He almost killed himself!" Davidek said, his cheeks stuffed with food. "He chopped off a dude's fingers!"

Davidek's mother clanged her fork and knife flat on the table. "For God's sake, we're eating fish sticks," she said.

Brutal Youth is the story of Peter Davidek, Noah Stein, Lorelei Paskal, and a sizable cast of students attending a private Catholic school in Pennsylvania. An explosive prologue introduces the reader to the characters on Visitor's Day at St. Michael the Archangel High School, a day potential students are allowed to attend classes so they can get a feel for the school and its routine. Instead of a typical school day, though, Visitor's Day goes horribly wrong when a bullied student reaches his limit, becoming both violent and suicidal.

Davidek really doesn't want to attend St. Michael's, especially after such a harrowing Visitor's Day. He has plenty of friends at the public high school. But, in spite of his protests he ends up a student at the school and decides the best approach is to keep his head down and do what he's told. Stein, on the other hand, is an angry guy and not about to let anyone push him around. Lorelei is hoping for a fresh start after a misunderstanding at her old school left her friendless.

A love triangle, sanctioned bullying, a mixed bag of teachers both kind and cruel, and a priest who privately wants the school to close are among the elements in Brutal Youth, a novel worth talking about for the way it exposes the dark side of school life.

I think what I loved most about Brutal Youth was the dark humor (as evidenced in the excerpt, above) but I also cared about the characters. And, I think just about everyone can relate to the kind of behavior in the book -- either the bullying by fellow students, the surprisingly bad behavior of adults or the parental failures that make trouble at school doubly hard to handle. Breznican's writing is almost painfully astute.

I've read Brutal Youth twice, now.  The first time I read it, I checked out a library book and chatted with the author on Twitter while I was reading. Doing so gave me some really interesting insight -- some of it after the fact. On the first reading, I felt like the bullying was relentless and desired a happy ending or at least a light at the end of the tunnel. The second time, I was sent a copy by the author's publicist for a Q & A (which will come some time in the future) and had time to stop, mark passages, ponder the characters and their motivations a little more deeply, and really appreciate what the author was trying to accomplish. It helped that we'd discussed his goal. This is what the book looked like after the second reading: 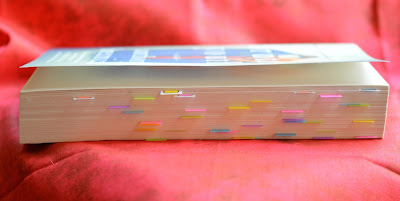 I came out of the second reading with such an appreciation for Breznican's craftsmanship that I bumped up my Goodreads rating from 4 stars to 5.

And, I managed to talk my book group into reading Brutal Youth. I'm excited. There's so much to discuss.

Highly recommended - A sharply drawn story of friendship, bullying, and the failure of adults to act responsibly or serve as decent role models, both as parents and teachers. Exceptional characterization, dark humor, and an understanding of interaction at the high school level are the particular hallmarks of Breznican's writing. I can't wait to see what he comes up with, next. Warning: There are some particularly uncomfortable scenes of violence and humiliation. Brutal Youth is truly brutal; the title is fitting. But, it's a book that makes you think about what true friendship really involves and examine the concept of bullying. I'd go so far as to say it's an important book, one that should be read and discussed by students and adults alike.

©2015 Nancy Horner. All rights reserved. If you are reading this post at a site other than Bookfoolery  or its RSS feed, you are reading a stolen feed. Email bookfoolery@gmail.com for written permission to reproduce text or photos.
Posted by Bookfool at 10:17 AM