Extreme Food: What to Eat When Your Life Depends On It by Bear Grylls 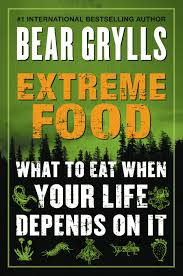 Extreme Food: What to Eat When Your Life Depends On It by Bear Grylls
Copyright 2014
William Morrow - Nonfiction/Survival
272 pp., incl. index, picture credits and appendices

If you've seen Bear Grylls eating disgusting things on television, you probably have a decent idea what you're in for in Extreme Food but it's far more than worms, birds' eggs and snake meat (although, ugh, I've seen him cook all of those on TV and that egg and worm omelet . . . just, no).

Let me back up a bit. What I expected of Extreme Food was entirely different from what I got. Grylls talks about food, but he also mentions things you should carry in your backpack if you're going out in the woods, how to build a proper fire, how to make a container in which to do your cooking, which plants are best raw or cooked and what he considers the best way to cook them, how to build a number of different traps to catch edible animals, how to best approach an animal you want to hunt, various ways to kill animals and how to make the tools to do so (including a number of different methods of fishing), how to distinguish animal tracks, which animals to avoid entirely and which of the various hunting methods are typically illegal and should only be used if you are in a life or death situation.

That's a surprising amount of information crammed into such a small book. However, there's a down side. The chapter about fungi, for example, describes both edible and poisonous mushrooms. Unfortunately, Grylls says many are so difficult to tell apart that it's best to purchase a more comprehensive guide and study them. Not helpful on the fly. Nor are some of the illustrations all that clear; although, to be fair, some are quite good.

A few things I learned:


One thing that hasn't changed:


The bottom line:  There's a lot of interesting information in Extreme Food and it's an enjoyable read, if occasionally a bit disgusting. But, it has its downfalls. If you're looking for a single survival manual to keep handy in the event of disaster (to tuck in your automobile trunk or keep handy if you're camping or hiking), this isn't the book I'd choose. I think you'd be better off reading a more comprehensive manual like that put out by the S.A.S. or the U. S. Army. Having said that, I think anyone who has a general interest in survival may come away from the reading having learned something, so I recommend it but it's definitely not my favorite of the survival guides I've read.

My apologies to anyone on my feed who has seen three versions of this post. I made a mistake in the first version, updated it, and then decided I needed to add a few more thoughts.

©2015 Nancy Horner. All rights reserved. If you are reading this post at a site other than Bookfoolery  or its RSS feed, you are reading a stolen feed. Email bookfoolery@gmail.com for written permission to reproduce text or photos.
Posted by Bookfool at 11:41 PM

Email ThisBlogThis!Share to TwitterShare to FacebookShare to Pinterest
Labels: Bear Grylls, NF, recommended but not a favorite, survival, William Morrow