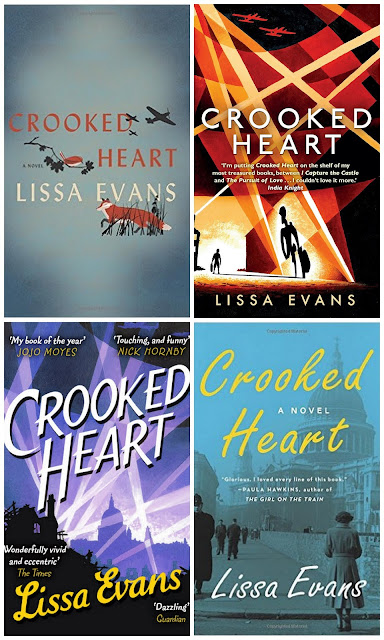 I read Crooked Heart by Lissa Evans as an ARC, last year, and was so enthusiastic about it (it's in my top 5 from the last 5-10 years) that I took it with me to my book group the month I read it. I knew they would not read and discuss it right away because we only select books available in paperback -- and preferably obtainable from the library -- but when it eventually became available, our group leader added it to the calendar and we discussed it last week.

The author and I are Twitter friends, so I asked her if she had any insight to offer and she kindly sent me the material that's included in the American paperback copy along with a Q/A, both of which were very insightful. I particularly wanted to know if there was anything she wanted to point out about the book and I'll get to that in a second.

Crooked Heart tells the story of a young evacuee from London during the Blitz, Noel, and the woman who takes him in. Here's a link to my review:

I read the Q/A aloud because we all had those blank looks you sometimes get when there aren't any prepared discussion questions and nobody's exactly sure where to begin. I occasionally stopped to say something or ask opinions about one of her answers and by the time I reached the end of the Q/A, discussion had been nicely stirred up.

In both of the documents, the author mentions wanting to write about the "underside" of the Blitz and this is what she mentioned to me when I asked if there was anything in particular that she wanted to note. The underside she's referring to are the people who cheated or stole during the Blitz, just as they normally would - and how she researched a sector of society often overlooked because they weren't the type to either be interviewed about how they lived or to write memoirs. This was done via local newspapers of the time, with particular focus on the Herts Advertiser and St. Albans Times, a now-defunct paper that contained "a patchwork of stories that reflected all aspects of wartime provincial life, where bomb news and black-out advice nudged shoulders with accounts of Masonic Social Nights and lists of people being prosecuted for defaulting on the rates".

We talked about hometown newspapers that contained similar snippets. Most everyone knew of a paper that had done the same. My hometown called its one-paragraph reports the "City Briefs" and they were immensely entertaining, from birth announcements to petty crimes, accidents, reports of loose animals and strange happenings around town, etc.

The author spoke about whether or not her characters were "morally shaky" and how one person labeled Crooked Heart a "children's book" because one of the characters was 10 (and then 11) years old. We talked about the morality of the characters but I neglected to mention something that really jumped out at me on the second reading. The first time, I thought of Vee -- who goes door-to-door asking for donations to various organizations, such as support for widows and orphans of pilots killed in the war -- as a horrid person who eventually softens. But, the second time I read the book I realized that Vee was just doing what she knew how to do to help her family survive; she worked incredibly hard to keep everyone fed and satisfied, in spite of the fact that nobody ever expressed gratitude. The fact that I paid attention to Vee's efforts, the second time through, made the book even more appealing -- and it was already a 5-star book.

One of our members mentioned that she found her way into reading adult books, during a time that YA did not exist, by reading any novel that contained a child. The author herself said she didn't mind if it was accepted as a read for children, as well, although that was not her intent. I don't recall what we said about that but I should mention that the book is free of anything that one might consider too offensive for children and it's certainly a book that I would have loved as a child, since my interest in WWII began around the age of 9 or 10.

We talked about the complexity of the book, the cleverness of Evans' plotting, and the vividness of the scenes. Everyone was particularly impressed with the scene in which Vee is hunting for a missing Noel and they're caught in a bombing raid, how the bombs grew closer and closer and the horror of knowing that they were in the path of those bombs was so visceral. It was very much a "you were there" type of scene and I think we were in agreement that it will stick in our minds for quite some time.

Mattie, Noel's godmother, who appears in the prologue and whose impact on Noel continues throughout the story, also was mentioned both because she was such a wonderful character and we were all happy to hear that the author is going backwards in time to tell Mattie's story in her next novel. Everyone loved Mattie.

Finally, one of our members asked for a summing up of everyone's opinion: thumbs up or down? It was unanimous: everyone gave it a thumbs up. Generally speaking, a book that everyone agrees on is one that doesn't generate the best discussion and there were times we lost the thread, but never for long. Crooked Heart contains such fascinating characters and scenes that there was plenty to discuss. I was relieved that everyone enjoyed the book, since I recommended it. It's always a great feeling when the majority (in this case, all) love a book you recommend and rather a horror when a title falls flat and/or is one that nobody really wants to talk about, so I went home happy.

Bottom line: Crooked Heart is a solid discussion book that everyone in my group loved. And, it's still one of my favorites. There's much to be enjoyed on a second reading and I imagine I'll reread it many times, in the future.

©2016 Nancy Horner. All rights reserved. If you are reading this post at a site other than Bookfoolery  or its RSS feed, you are reading a stolen feed. Email bookfoolery@gmail.com for written permission to reproduce text or photos.
Posted by Bookfool at 1:01 PM