Safe from the Sea by Peter Geye 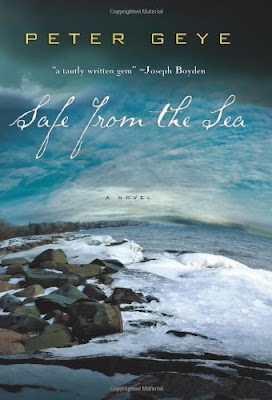 I first heard about Safe from the Sea from author Alex George, who highly recommended it, and then got a second recommendation from a friend who read one of Peter Geye's other books. It was after the latter recommendation that I decided it was time to stop eyeing the book (which I own) and start reading.

Safe from the Sea by Peter Geye is mostly the story of the protagonist and narrator's father, Olaf Torr. Olaf worked boats on the Great Lakes and in 1967, he was one of only three survivors of a tragic accident. Books have been written about the foundering of the Ragnarok and there's a museum exhibit about it. Yet, he's never really spoken of the experience that broke him and why it had such an overwhelming impact on his life.

Thirty-five years after the disaster, his son Noah gets a call from Olaf. Noah lives in Boston, where he's having his own difficulties. His wife Natalie has had numerous miscarriages and their desire for a child has become an obsession. When Olaf calls to tell Noah that he's sick and needs help, Natalie is unsure she wants her husband to go. Neither of them has seen Olaf since their wedding. But, Noah feels obligated and maybe even has a desire to see if he can learn about the incident that destroyed his father and changed his own life for the worse.

Gradually, the story unfolds. Olaf is dying and finally willing to share what happened and why it changed him. And, as Noah learns the story of his past and spends time in his grandfather's home, he finds his love of the beauty and majesty of the place he knew as a child quickly reawakening.

Recommended but not a favorite - Geye's writing style is very masculine and fairly spare. I liked the writing. But, I have mixed feelings about Safe from the Sea. It was a hard book for me to get through because I was once the child hoping to convince the dying parent to explain what broke her. I did not succeed. That's clearly not the book's fault, nor is there anything wrong with the fact that Olaf was dying of cancer, something I avoid reading about because it's too painful -- at least that part was secondary. But, because of my own history, it simply could not be a favorite read.

Will I read this author, again? Absolutely. I did love the ending, which I found satisfying, and, wow, isn't that cover beautiful?


©2016 Nancy Horner. All rights reserved. If you are reading this post at a site other than Bookfoolery  or its RSS feed, you are reading a stolen feed. Email bookfoolery@gmail.com for written permission to reproduce text or photos.
Posted by Bookfool at 1:25 PM

Email ThisBlogThis!Share to TwitterShare to FacebookShare to Pinterest
Labels: Peter Geye, recommended but not a favorite, Unbridled Books